Game of Thrones 4×09 Review: The Watchers on the Wall 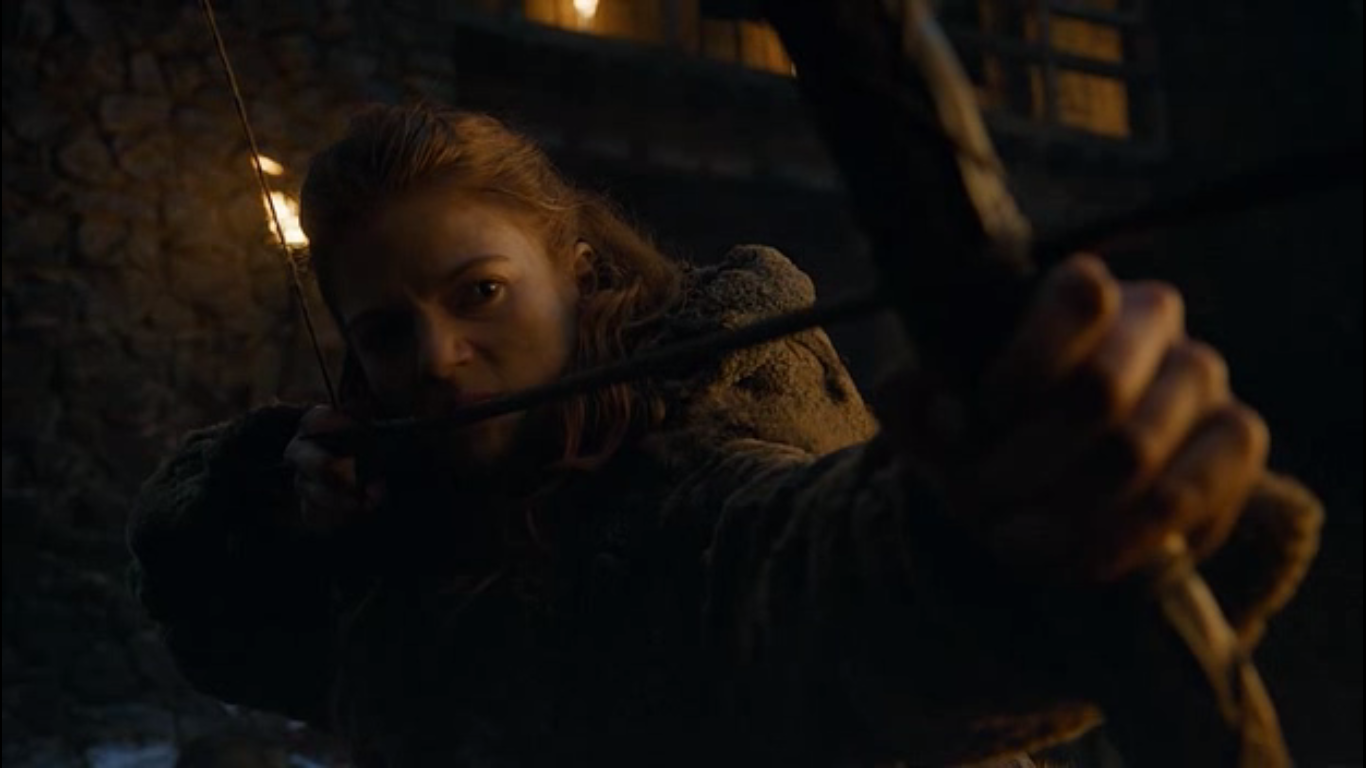 Unlike the majority of Game of Thrones episodes, which usually bounce back and forth between many characters, settings, and plot lines, The Watchers on the Wall focused on one single event. After three seasons we’ve picked up the pattern that the 9th episode of each season has a huge impact on the narrative, and considering the scale and dramatic impact of last night’s events, the focus on one place was absolutely warranted. This season already featured Joffrey’s death and the shocking result of the combat between the Mountain and the Viper, so it was hard to imagine how The Watchers on the Wall could keep up with season four’s already established pattern of blowing us away, but it absolutely did.  While the scope of the battle for the Wall wasn’t as large or as immediately pressing as the Battle of the Blackwater in season two (or at the very least, not as flashy without all of that wildfire), I would argue that it has a stronger narrative impact, especially for many fan favorite characters.  The decision to not bounce to other plots during the episode was a good one as it let us fully immerse ourselves in the event.  Yes, I’ve read the books, but that doesn’t mean I wasn’t extremely emotionally effected by the events in this episode.  I cried, okay?  I cried lots and lots of tears and I’m not ashamed to admit that.

Before we even delve into the plot, I want to take this moment to praise the sound designers and mixers.  The horns have been creepy ever since they sounded three times back at the end of season two.  Whenever they sound now I hope that it will only be once, but this time we got a second blow of the horn.  Yes, three is far worse, but we’ve known that the Wildlings have been advancing on the Wall for a while, so as soon as the second horn sounded I knew what was coming around the corner and my heat dropped. Despite knowing what was about to happen, I couldn’t help but have a visceral reaction to that second blow of the horn. Beyond the eerie sound of the horn, though, the music in this episode was incredibly well blended with the action.  Sound adds a layer to scenes that usually doesn’t get noticed by the casual viewer, but it was so superb during this episode that I have to tip my hat to them.  They deserve all of the praise in the world here – well done! 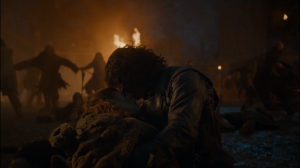 So anyway, Ygritte is dead.  Sucks, right?  Ygritte is a character that has fascinated me since her first appearance.   She’s a spitfire – full of life, and seemingly afraid of nothing.  Even in this episode she showed her fearlessness by standing up to the Magnar of the Thenn, not even batting an eye over the fact that he towered more than a foot above her.  It seems that the only thing that shakes her is her feelings for Jon Snow; so much so that she purposely hesitated over killing him twice, which is something that she clearly wouldn’t have done for anyone else. While Jon ultimately chooses his duties to protect the realm over Ygritte, he obviously realizes that he loves her, to a degree that surprises him. I don’t for a second believe that his actions with her were done only to deceive the Wildlings, though that may have been his surface motivation. Their star crossed love caused me a massive amount of pain to begin with, but her death has now made me break out into tears twice (once when reading the books and once while watching it on TV). Ygritte is a character I’m going to truly miss.  Yes, people die in this story and that’s a fact we all need to come to terms with, but when you admire a character as much as I admired Ygritte, it affects you for a long, long time.

While the Ygritte plot line has left me absolutely heartbroken, there was a great deal to cheer about during this episode.  For example, everything related to Sam and Gilly was absolutely beautiful.  I’ve now dubbed Sam as Sam “Unexpected Badass” Tarly.  He managed to kill one of the biggest, baddest Thenns, keep a cool head in the heat of the battle, and direct others regarding the best way(s) to defend the Wall. I feel like Gilly is where he found his strength.  He was a coward when he joined the Night’s Watch, but his desire to protect Gilly and her baby brought out a hidden strength that’s even stronger than that of Janos Slynt, the former Commander of the City Watch, who hid from the Wildlings when things got tough. Sam even states that he wasn’t really himself when he killed the White Walker to protect Gilly; when the thought of Gilly being hurt comes into play, Sam turns into a complete badass who should be feared. 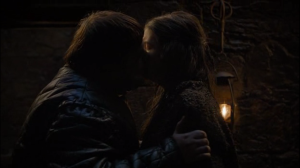 The love between Sam and Gilly is so pure that it actually makes me tear up a bit. Gilly is a sweet girl, but she’s also a survivor – she survived a horribly controlling, abusive, incestuous ‘marriage’ and managed to escape with her perseverance intact.  She can start fires and help take care of Sam in ways that he never really learned about as a Lord’s son. She’s sweet, but she’s not completely helpless. Likewise, Sam is an incredibly kind person who everyone assumes will be one of the first to die due to his ‘cowardice’, yet he’s one of the few people who has taken down a White Walker, and he has become a key player in the fight to protect the Wall. He and Gilly managed to cross miles of land north of the Wall together against nearly impossible odds; they’re a perfect match due to their dual innocence and determination because they balance each other out in ways that few pairings manage to do. It’s amazing.

The dynamic between Jon and Sam was also something that I’ve sorely missed. Jon spent a great deal of time north of the Wall, and Sam was away protecting Gilly.  Now that they’ve reunited they’ve easily slipped back into their strong brother-like bond. They manage to make each other laugh even when things are incredibly bleak – Sam’s interpretation of the Night’s Watch vows made me giggle, as his thoughts were so very clearly with Gilly at that moment, and they seemed to bring a smile to Jon’s face too. Sam also manages to back up Jon when he steps into a leadership role, even while Sam questions Jon’s decisions. These two have an incredibly strong faith in one another, and that faith isn’t shaken when they question each other. They listen to each others’ opinions and value each other in a way that’s very important in the type of crisis they faced during The Watchers on the Wall. It’s a friendship to be admired.

Even if you haven’t read the books, I feel like Jon taking command has been telecast pretty loudly for a very long time, and this episode brought that point home in a big way. It proved that the men of the Night’s Watch trust him and have no problem taking orders from him; it also proved that he has good decision making skills, as well as tact when others make the wrong choices.  His ‘fancy’ training in a castle may have made him an outcast at first, but it’s exactly what’s needed in such an obviously dire situation. His skills with a sword aren’t the only thing that’s needed – his strength of character is something to be admired as well. Jon Snow isn’t by any means a perfect person, but he always tries to do the honorable thing. He truly believes in his mission and is prepared to fight to the death to achieve it. 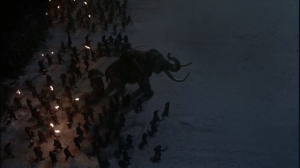 We’re poised to head into the finale now, and while the ninth episode of each season has always had huge ramifications, every season has also ended with an extremely dramatic closing shot. We’ve already had so many dramatic moments this season that it’s difficult to imagine being able to top it in scope and dramatic impact, but I have faith that they’ll do it. Despite the unsavory themes of non-consent and the questionable deviations from book canon this season, it’s been an incredibly satisfying ride.  I hope you’re all ready for the finale. Stock up on your vice(s) of choice and let’s do this!

Previous:Teen Wolf Season 4 Trailer: Who Is The Benefactor?
Next: Orphan Black 2×08 Review: Variable and Full of Perturbation