Game of Thrones 5×2 Review: House of Black and White 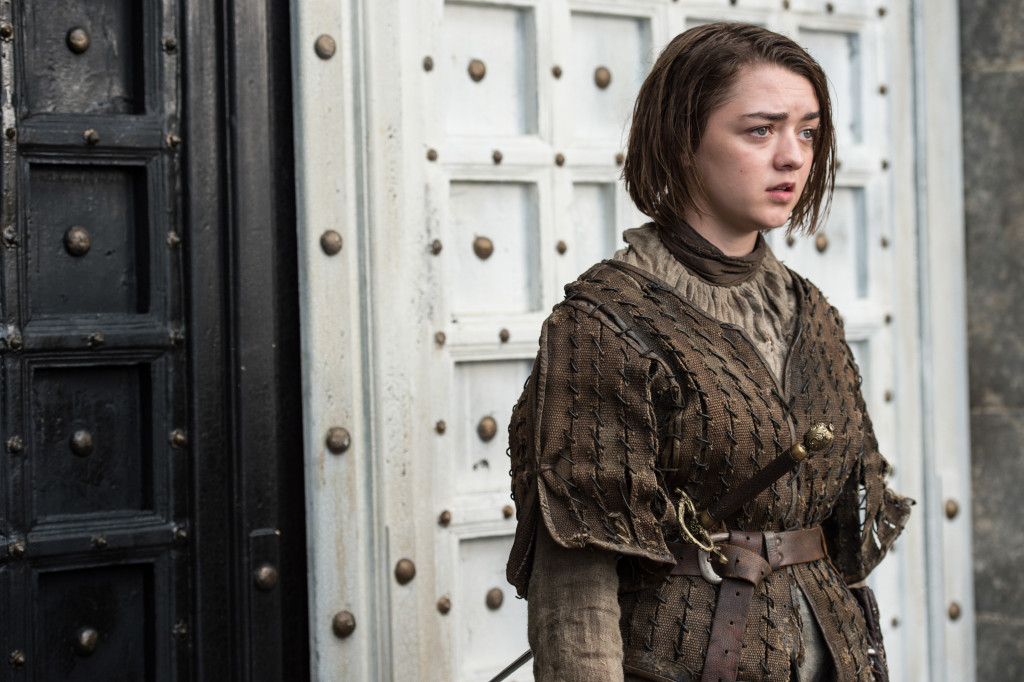 The second episode of the season was heavily focused on two of my favorite characters, Arya and Daenerys, who are both engaging in journeys of self-discovery, albeit in very different ways.  The way these two characters contrast with each other has been one of my favorite parts of the entire series, both in the books and on the show.  In fact, all of “House of Black and White” was very female-focused, even beyond these two characters.  Most of the scenes that exclusively involved men even related to the women in some way, which I found a sort of interesting reversal on the classic Bechdel test.  Episodes like this are a great reminder of why I love this show and its well-crafted cast of characters, particularly the diverse and incredibly dynamic women.

The title of the episode comes from the House of Black and White in Braavos, where Arya ends up after crossing the Narrow Sea.  She follows where the coin given to her by Jaqen H’Ghar leads her, believing this to be where she’s meant to go as she moves toward her goals.  When she shows up at the door she’s rejected, which comes as a shock to her given the fact that the Braavosi have been so accommodating to her thus far.  She seems to have adapted easily into Braavosi culture on many fronts, being able to use ‘Valar Morghulis’ and ‘Valar Dohaeris’ with ease, but the door to the House of Black and White gets slammed in her face right away.  However, she doesn’t immediately give up.  She stays on the steps all night reciting the names of those she wants to kill as she plays with the coin that seemingly lead her here.  She eventually gives up and heads out into Braavos on her own, deciding that she needs to do something other than wait on the steps all day.

Arya’s solo adventure into Braavos ends up being a true test of her character.  She’s confronted with some thugs in an ally and stands her ground, which causes the man who slammed the door on her face to return behind her in an extremely ominous fashion.  The mere sight of him causes the boys to flee, apparently recognizing him – and what he stands for – on sight.  The man ends up being Jaqen H’Ghar with a different face, but he insists he is “no one” and “that is who a girl must become.”  This is the point when Arya’s journey truly takes off.  She’s now been granted entry to the House of Black and White, a place among the Jaqen H’Ghar’s people, and a chance to test herself and discover if this is really the path she’s meant to be on.  I don’t know about you, but I’m incredibly excited about this development.  Arya has always been strong, but now she’s far across the Narrow Sea, on her own, and becoming her own person without the weight of Westeros on her back. 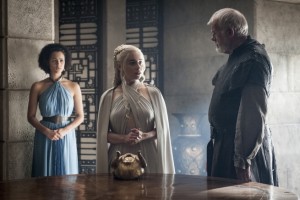 Daenerys, meanwhile, is having a rather rough go of it in Meereen.  As Arya is trying to find herself in Braavos, Daenerys is trying learn what kind of ruler she is and how she fits into the fate she has had laid out in front of her.  Her initial instinct is to rule with an iron fist and execute the Harpy they’ve caught.  When reminded of her father’s ruthlessness, she decides to take a different approach and give him a fair trial.  But this turns out to not necessarily be the right move, as the Harpy gets murdered.  Daenerys has been through many tests in her life, but this proves to be one of the more difficult ones.  She’s forced to execute one of the slaves she freed, which causes the other slaves to hiss in anger.  The sound was truly frightening and it seemed Daenerys immediately recognized that she may have made a mistake.  Ruling isn’t easy.  This lesson has been especially brutal for her in Meereen, and she’s only just begun her reign.

We also had two of my other favorite women cross paths, though I’m not exactly as thrilled about it as I should be.  Brienne finds Sansa, which should be a victory, but I feel it cuts out a lot of the emotional turmoil that Brienne goes through in the books.  I felt the same way when Brienne discovered Arya.  But alas, we knew that the stories would diverge so I need to get past the differences and judge the show based on its own merit.  In that regard, these two characters rocked it.  Sansa was firm in her concern about going with Brienne.  While we know that, between Brienne and Littlefinger, Brienne is the better choice, Sansa has every right to be wary.  She feels like she knows Littlefinger and has some control over him and her situation.  She’s never met Brienne before.  Brienne also sticks to her guns and vows to protect Sansa even though Sansa has denied her assistance.  They were both very true to their characters, even though this is a situation that never came up in the source material. 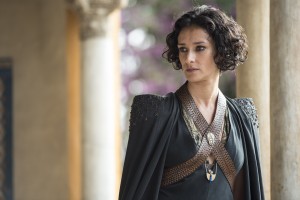 Another woman who featured predominately in the episode is Cersei, who shows a great deal of concern over her daughter in Dorne as well as the same play for power at the Small Council that she showed when her eldest son was King.  While Cersei is extremely controversial and categorized as an antagonist, you can’t deny that she’s ambitious and focused.  Her decisions may leave much to be desired, but she wants her family to be safe and powerful and nothing is going to stop her.  Her concern over Myrcella also brings the story to Dorne, which we get our first real glimpse of as they deal with the repercussions of Oberyn’s death.  It also brings Ellaria Sand back into the plot, another fierce woman who I’m excited to watch develop this season.  She’s clearly clashing with the Prince of Dorne and that certainly can’t be good.

There were two scenes with mostly men in them that were also female-focused, which called to mind the aforementioned reversal of the Bechdel test. We had two named men talking to each other, but it was primarily about women.  It was sort of refreshing.  The first was the discussion between Ser Bronn and Ser Jaime.  Their mission is, of course, to rescue Myrcella from Dorne.  The only disappointing part of their conversation was how other women besides Jaime’s daughter (or, excuse me, his niece),  were treated as property to trade.  It’s a sad fact of this world that women are married off for political means, but it was sad to see Lollys dismissed so quickly so that Bronn can have a ‘better castle.’  The second male dominated scene that was female-focused was the conversation between Varys and Tyrion.  They are off to see Daenerys, a woman that Varys believes can take the Iron Throne.  Tyrion is less sure of his convictions, but doesn’t really have many options after the events of last season.  There was idle chit chat about bugs and alcohol, but their ultimate mission is to get to Daenerys.

At the Wall, which is supposed to be a place exclusively for the men of the Night’s Watch, we also had a heavy female presence.  There’s a rather charming moment where Shireen is teaching Gilly how to read while Sam sits off to the side immersed in his book.  He pops in occasionally with commentary, but the focus is still on Shireen and Gilly.  It’s a rather touching scene, but it’s broken up by Shireen’s mother.

In fact, the only sequence that didn’t have a female focus this week was Jon Snow’s election to Lord Commander.  The sequence started with a very frank conversation with Stannis Baratheon, where Jon is given the option of becoming a Stark.  He rejects the offer, which leads directly into the election.  The Wall is usually a boys’ club, after all; the women who Stannis brought with him, and Gilly, stand out in this location.

Despite the differences between the books and the show, I am enjoying this season so far.  This second episode in particular brought to the forefront many themes and characters that I value greatly. My only fear is that we are quickly running out of source material and, sooner or later, something is going to have to give.  But I think we’re all aware of that problem at this point, so we just have to sit patiently…because there is nothing any of us can do about it.

Previous:Doctor Who: The Tenth Doctor Vol 1: Revolutions of Terror – Review
Next: POLL: Genre TV Show Down- Final Round