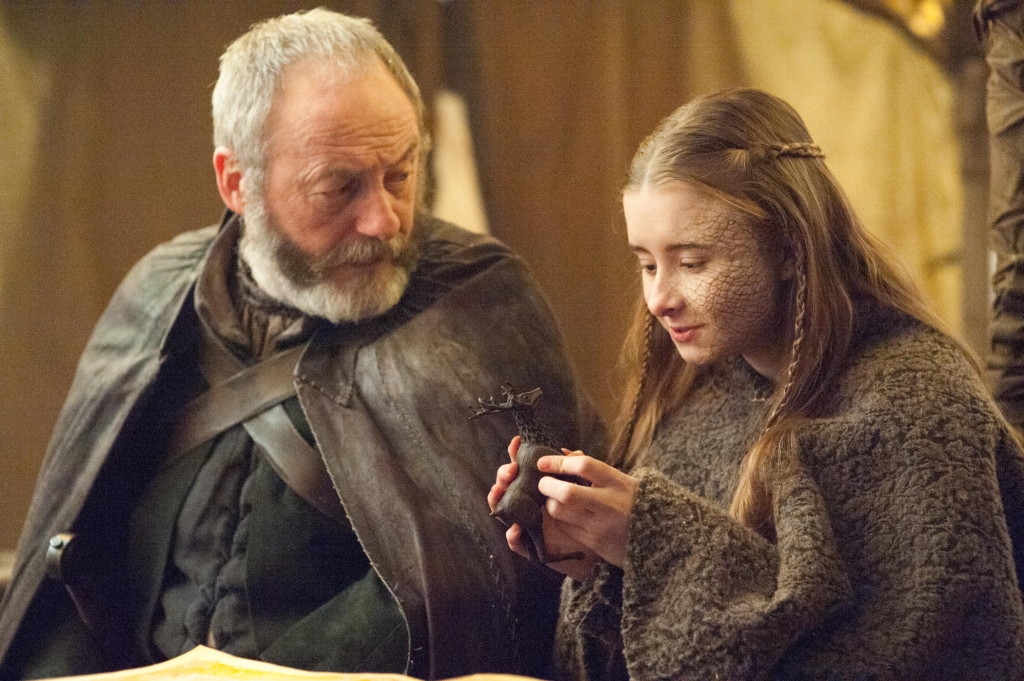 Remember how last week made me so happy?  I was like ‘hey, this is that show that I love!’  I thought my feels were back and I’d be able to enjoy this show again going forward.  Well, that didn’t last long.  It’s going to be hard to give a balanced review for the rest of the episode, because I’m just so damn angry about one plot line I can hardly breathe.  I. Am. Fuming.  But I’ll try, because a lot happened and the scene that sent me into a state of shock and anger only lasted a few minutes, so it’d be unfair to ignore the rest.  But holy hell, guys.  Why?

TRIGGER WARNING: This review contains discussion of sexual assault, which seems like is a default for almost all Game of Thrones reviews going forward, unfortunately. 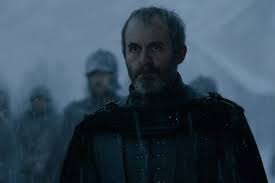 Shireen.  My darling Shireen.  The best thing about Stannis’s story, the part of his plot that made him a likable character, is now dead.  For much of the books I wasn’t too thrilled with Stannis’s plot.  He would sweep in to save the day for someone, be sort of moody elsewhere and grump about, then skip off to save the day elsewhere all in the name of politics.  Shireen is what made his story on the show something to look forward to.  Now what do we have?  Not much.  Daavos, maybe, but he’s headed back to Castle Black right now and I hope he stays there.  Melisandre was pretty cool until she proved she’s willing to kill children (which she’s also willing to do in the books, but the thought is expressed under very different circumstances).  Now we have cranky Stannis, evil Melisandre, and nearly-redeemed-herself-but-waited-too-long Selyse Baratheon.  Oh, and then a bunch of nameless soldiers we know nothing about.

It’s strange how in the books I don’t bat an eye when they kill characters left and right, but when the show decides to push the envelope with death it’s not nearly with the same carefully-crafted emotional impact.  Ned, Robb, and Catelyn’s deaths all felt like a punch to the gut, but their deaths did something to the story.  Ned’s death essentially spun the war for the throne out of control, causing the North to break off and rebel against the capitol.  It was basically the source of the plot for most of the story so far.  That was a well-written, but shocking death.  The Red Wedding was also quite emotionally devastating, but it weakened the North when it was doing well and changed the course of Arya’s character for the rest of the story thus far.  What on earth did killing Shireen do?  Cause Stannis pain?  In the next few episodes, it’ll probably cause Daavos pain too and, Gods, I am not looking forward to that. I guess it did show the extremely dark side of Melisandre, but we kind of got that already haven’t we?  Shireen’s death isn’t something that would cause huge political repercussions no matter how you look at it.  It was done purely for shock value.  The thing is, this story doesn’t need something done purely for shock value.  When it does something shocking, it can actually give something to the overall story instead of just causing emotional pain.

I can predict that people will come into the comments and say one of two things.  First, ‘give it a chance, we don’t know if it’ll be useless yet.’  That’s the same line of argument used to explain why Sansa’s rape wasn’t so bad.  Maybe Sansa will get revenge?  Maybe Shireen’s death WILL have a huge impact?  Well guess what, I don’t care what might happen in the future.  I’m feeling hurt now and not seeing any good reason for it.  Second, I’m sure people will urge me to ‘quit watching.’  Once the show gets to the point that the bad outweighs the good, I will.  So far the scale hasn’t quite tipped, but it’s getting dangerously close.  The only thing that saved this episode of the final sequence of events, but I’ll get to that in a bit.  At this point I’ll be watching the final episode of the season, then weighing my options.

But hey, at least Shireen wasn’t sexually assaulted before her death, right? Small miracles.  Because that’s kind of what this show’s been doing lately for shock value.  They just decided to kill her instead.  Should we feel like we got off easy here?

Moving on from the pointless shock value death, let’s talk about what plots have stalled.  I love Dorne, but the civil disputes between the Martells almost seem like a distraction when everything else is so overwhelming.  Do I care about Ellaria Sand and Prince Doran bickering about going to war with the Lannisters when an army of Wights and White Walkers is marching on the wall? Should I be concerned about the star-crossed romance between Trystane and Myrcella when there’s that whole Dragon situation across the Narrow Sea?  Considering how much I love Dorne as a location and the fiery personalities that reside there, I’m really bummed that I just don’t care about what’s happening.  Maybe it’s a pacing problem, like with Arya’s story.  I don’t know.  I didn’t feel nearly as bored with Dorne when I was reading it.

Speaking of Arya… well, there’s actually not much new besides, you know, some sexually violent language.  A female character just can’t exist in this universe with some sort of sexual violence being flung at her.  Besides that little ‘clam’ comment and the threat of being raped, she’s still doing her Oyster Girl thing and finding herself in Braavos.  Now that there are some big name characters from Westeros in Braavos there is a thread tying her back into the main plot, but I still feel like her story is being eclipsed by the rest of the show.  It doesn’t seem fair considering how incredible Arya is and how awesome the setting she’s landed in can be.  Alas, with all the stuff happening in other parts of the world her plot seems stalled, too. 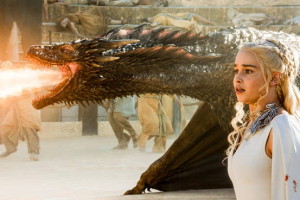 Now let’s talk about the one sequence of the entire episode that wasn’t done for shock value and wasn’t part of an overall stalled plot.  Daenerys finally rode a dragon.  Thank the Old Gods and the New because this episode was almost completely horrible.  This part was every bit as thrilling to watch play out on screen as it was to read it.  Daenerys is one of only two plots that I like anymore, but I like it so much that the scales are still tipped in favor of watching it further.  The other plot is Jon Snow’s, which we sadly didn’t see much of this week.  His also felt stalled for several episodes, but the battle at Hardhome last episode really pulled it out of the water.  Will Arya and Dorne’s plots have similar saving moments before the season ends? Not sure, but that was definitely a much needed shot of adrenaline.  Daenerys’s plot never really dragged, but this also propelled her plot forward at a remarkable speed.

So that’s where I’m at here.  Daenerys, her dragons, and Tyrion, and the Jon Snow’s plot with the Wildlings, Whitewalkers, and Wights are so awesome they are keeping me around.  Everything else is either awful or just plain boring.  After next week I’ll see if I’m going to stick it out or jump ship.

You know what should have burned on the pyre besides Shireen?  About 90% of this script. 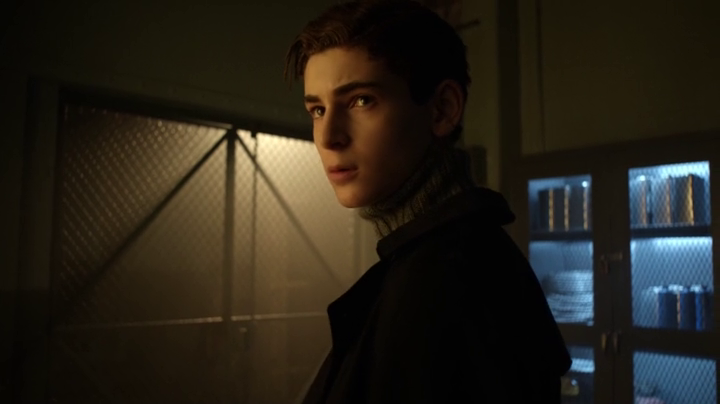 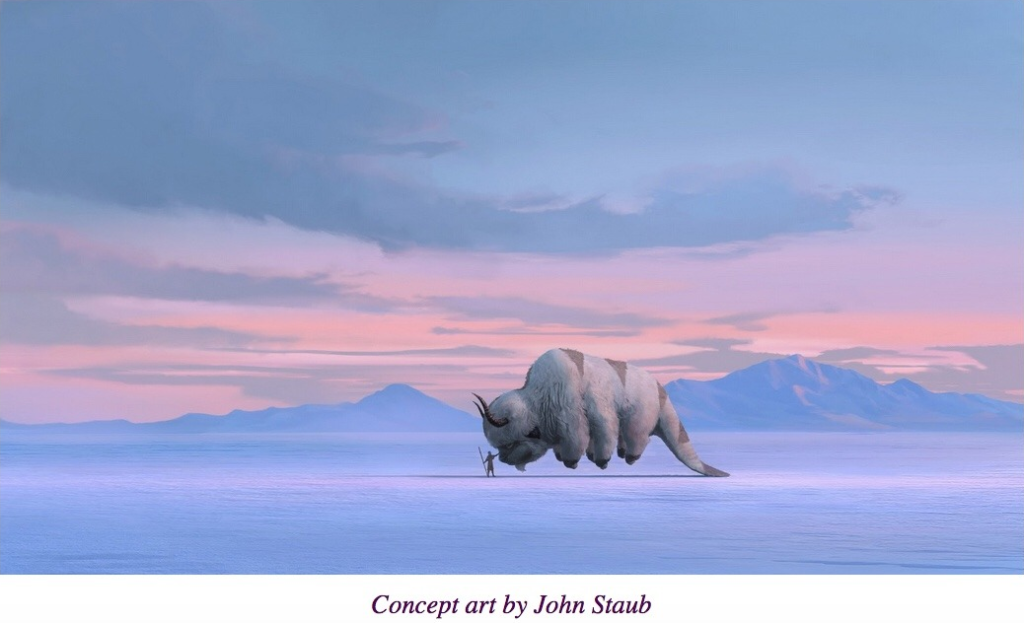 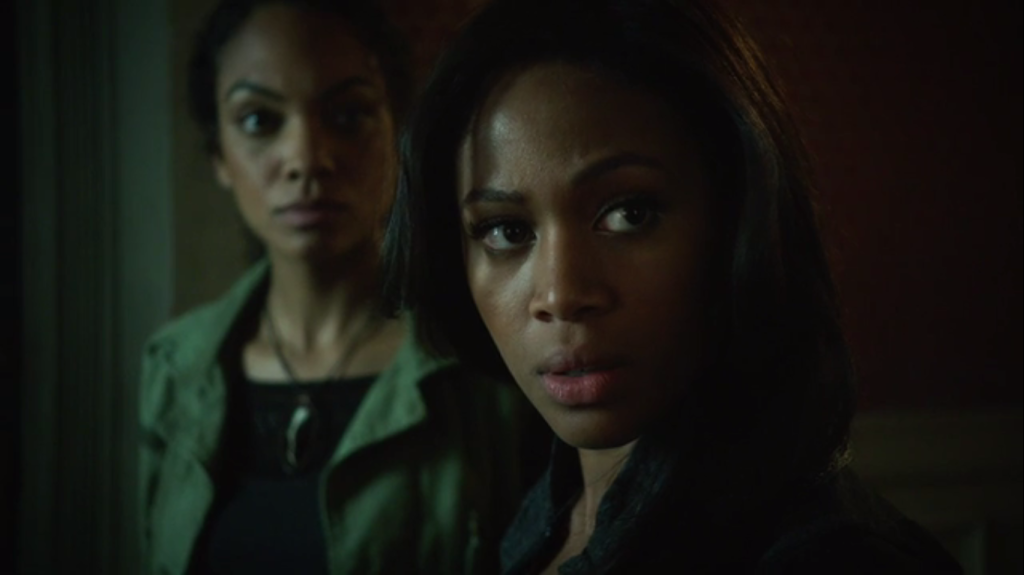