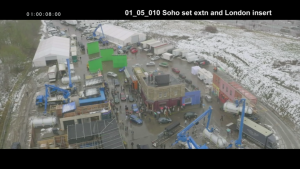 Amazon has just released the highly anticipated Good Omens deleted scenes to USA viewers, including many fascinating extras. This obviously gave us all the feels.

SPOILER TAG! This article contains an in-depth analysis of all of the Good Omens deleted scenes. This is great if you don’t have any other way to watch them. Less so if you have access to Prime Video or were otherwise planning on watching. If that’s the case, come back once you’ve had a chance to do your own fanflailing.

There was something magical about the first voice you hear in the Good Omens deleted scenes being Aziraphale’s. Stepping back into the first Good Omens content in five months was always going to cause a rush of emotion, and having Aziraphale there, gently talking about antique books in a low, soothing tone may have made things both easier and harder at the same time.

The opening scene feels like coming home. Returning to the bookshop is both calming and exciting. It’s home for the fandom’s favorite angel, and much like Crowley had his own safe haven in the back of the shop, it’s one for the Good Omens fandom as well. And when Aziraphale saves the runaway baby carriage with a quick snap, he may have melted all our hearts. It’s another soft glimpse at his casual angelic goodness.

It makes the switchover to Crowley’s casual demonic mischievousness all the more telling and enjoyable! Fans have long since hoped to find out how exactly Crowley brought down all the cell towers in London (to his own disadvantage, of course.) We’ve been waiting for this scene ever since Neil teased it in August, and it did not disappoint!

The rats were apparently only a distraction in order to give him access to the tower under the guise of fixing the infestation. The awkward elevator ride with the cell tower employee provides a brief look at how Crowley typically interacts with humans. We finally get to see his utterly nonchalant reaction at someone calling him out on his overuse of sunglasses. “My eyes” is neither explanation nor apology.

Of course, we all winced when he addressed the rats as “Thank you all so much, men.” But once again, Neil demonstrates he only wrote that line to prove a point because a rat objects, and Crowley responds “Oh yes obviously, ladies too!” leaving us all with the knowledge that Crowley not only takes criticism graciously without getting defensive, but he also speaks rat.

Notably, this scene is set exactly forty years after “You go too fast for me, Crowley,” and it will still be several scenes before he’s chronologically onscreen with Aziraphale again. So, it’s little wonder that he is shown unscrewing the cap of a stainless steel cup-thermos in order to pour its contents onto a control panel. Keeping the angelic tartan cup thermos in a safe behind priceless artwork for so long has seemingly given him a mild obsession with cup-thermoses now.

Another shocking moment in this scene was when Crowley threw the (affectionately fandom-named) “F*cking sh*t up jacket” over a fence as he gets into the Bentley to make his escape. This is the same jacket he’s been wearing to cause mischief since the 70s. But as we all know, Crowley miracles all his clothes, so fear not! This is only a matter of convenience, and he’ll surely summon another one next time duty calls. Or maybe the real jacket is the sh*t we’ve f*cked up along the way!

After giving us some time to reconnect with both Aziraphale and Crowley, the focus shifts to other characters. First up is War, where we finally get to see her introductory scene as it played out in the book. It’s understandable why it was cut for time and space, but it’s also wonderful to see War in her full glory, reminding people they can’t have a war without her.

While War’s scene isn’t a word for word from the book, it’s far more reminiscent than the final cut that made it into the TV series. The show seems to focus more on Leslie and his various delivery scenes with a brief synopsis of each recipient. War’s cut scene gives us a far greater understanding of the Horsepeople than simply what Leslie sees.

Next is Pollution! We already lost it back in May when God herself affirmed Pollution’s nonbinary gender. Now we get even more instances of divine they/themming as the Almighty narrates “Able Seaperson White’s” surreptitious orchestration of an oil spill. Yes, “Able Sea-person!” This show continues to be an absolute gift.

Much like War’s scene, Pollution’s is straight from the book. It’s clear this scene was cut due to timing and replaced with a longer scene by the stream instead. While it’s an understandable cut for the pacing, it’s nice for the book fans to be able to see Pollution in all their glory with an appropriately gender-neutral title.

The next scene features a lot of awkwardness on Newt’s part and a lot of flirtation and innuendo on Madame Tracy’s. While the majority is spent on the simple hilarious tension between the two and played for laughs, there is a hint to the upcoming “he is not who he says he is” plot twist. Newt again mentions his aspirations to be a computer engineer, yet he’s wisely deciding to limit his witchfinding work to the old fashioned way: paper. (Definitely the smart decision.)

One of the promotional pieces featured Aziraphale and Crowley standing with an umbrella as it rained fish. While we found out later this scene was cut due to budget constraints, the deleted scenes gave us a brief glimpse of what could have been.

There has been much fan meta along the lines of Crowley having to gently break it to Aziraphale that Heaven never gave him so much as a sham of a trial. And this scene shows us more of a glimpse into Aziraphale-as-Crowley’s hellish trial and makes that meta all the more sorrowful in context.

Aziraphale-as-Crowley asks “Is there anything I can say in my defense?” Hastur jeers that that’s a very good question. Dagon objects that it’s a stupid question, and there’s, in fact, nothing he can say or do. Beelzebub agrees with Dagon, announcing, “objection sustained,” and that’s that. Aziraphale must come to terms with the realization that, had the body swap not happened, Crowley’s fate would have been sealed without appeal.

Since the end of the series, fans had at least been able to console themselves that at least Hell gave “Crowley” some form of trial. Now we know it was barely even a sham. Neither truly received a trial. Crowley’s execution was just slated to happen in public.

We, the authors of this post, had a minor crisis of WTF when the “one big avocado” demon (affectionately nicknamed “Eric” by Neil Gaiman in the script book) seemingly asks to “eat” Crowley-as-Aziraphale, but it turned out to be an accent-related misunderstanding because the original script says “hit.” It’s, of course, Sandalphon who agrees to allow Aziraphale to be hit prior to his execution.

Somehow, this casual abuse seems worse than the execution itself. It’s worth noting that Crowley-as-Aziraphale is tied down at the time this is suggested. There have been discussions on the abuses faced under both the management of Heaven and Hell, and this is another unsettling highlight of that treatment.

Nonetheless, we get to see more of Michael Sheen’s menacingly salty portrayal of Crowley as he stares down his advancing foe, causing them to finally shrink away. Confidence and the tiniest of smirks acted through Michael’s amazingly expressive face would be enough to scare off any but the most determined of angels or demons.

Other special features released today include a VFX reel, Queen compilation, and galleries for storyboards, concept art, and costume design. It’s all free except the concept art, but that one is well worth the $2.99 because you get close-up scans of various 2D props, including the Nice And Accurate Prophecy book, Crowley’s exterminator ID badge, the Antichrist playing card, The Extremely Big Book of Astronomy, both heavenly and infernal newspapers, and much more.

Caspian (left) and Corellon (right) are two feral nonbinary Crowley cosplayers who have a lot of thoughts about Good Omens and nonbinary representation. If you’re seeing this joint bio instead of one of their individual ones, you’re probably reading an article about one or more of these topics.