“Harley Quinn and the Birds of Prey” Early Twitter Reactions: Is There Any Queer Rep? 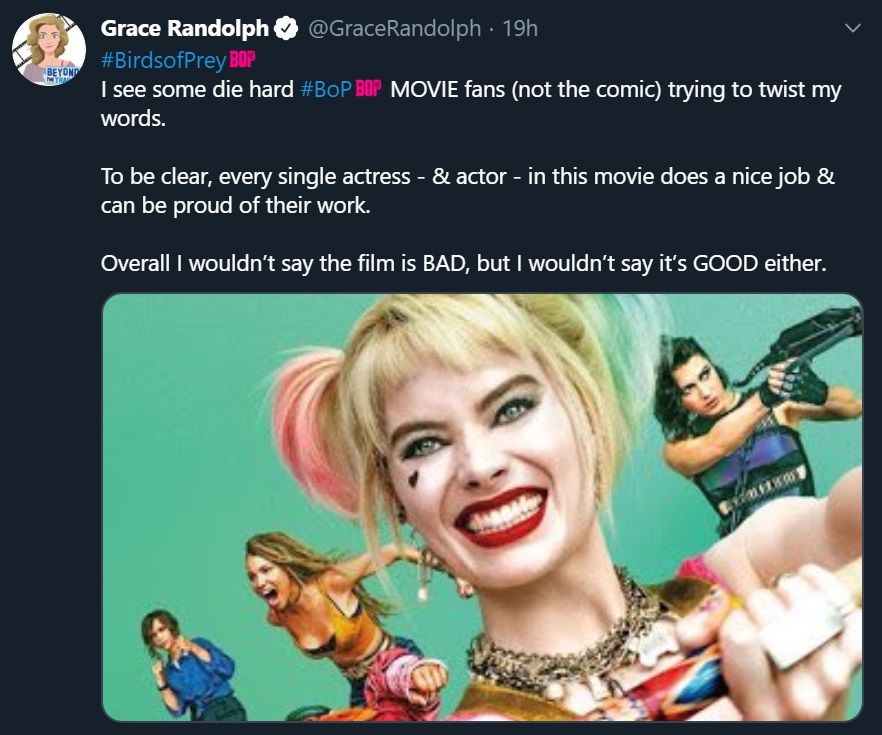 One of the questions that some fans have about the upcoming Harley Quinn and the Birds of Prey movie deals with whether or not it will feature any queer representation. Well, with the embargo lifted on non-spoiler social media reviews, we have our disappointing answer.

This article contains certain minor spoilers about Harley Quinn and the Birds of Prey. You have been warned, Puddin!

When news leaked about Ewan McGregor’s Black Mask being a queer character in the upcoming superhero film from DC and Warner Bros., of course, many fans were worried. According to reports, the character was going to behave in a stereotypically flamboyant queer manner. There were also other problematic plot elements fans didn’t want to be portrayed on the big screen.

After the leak and some fan backlash, there was online chatter about the film undergoing reshoots. This development gave hope to some about the movie course-correcting itself, especially when it came to queer representation.

However, recent promotional content led to certain fans becoming worried all over again. Was Harley Quinn and the Birds of Prey going to follow the tired Hollywood trope of queerbaiting?

Even the amazing Billy Eichner called the movie out! 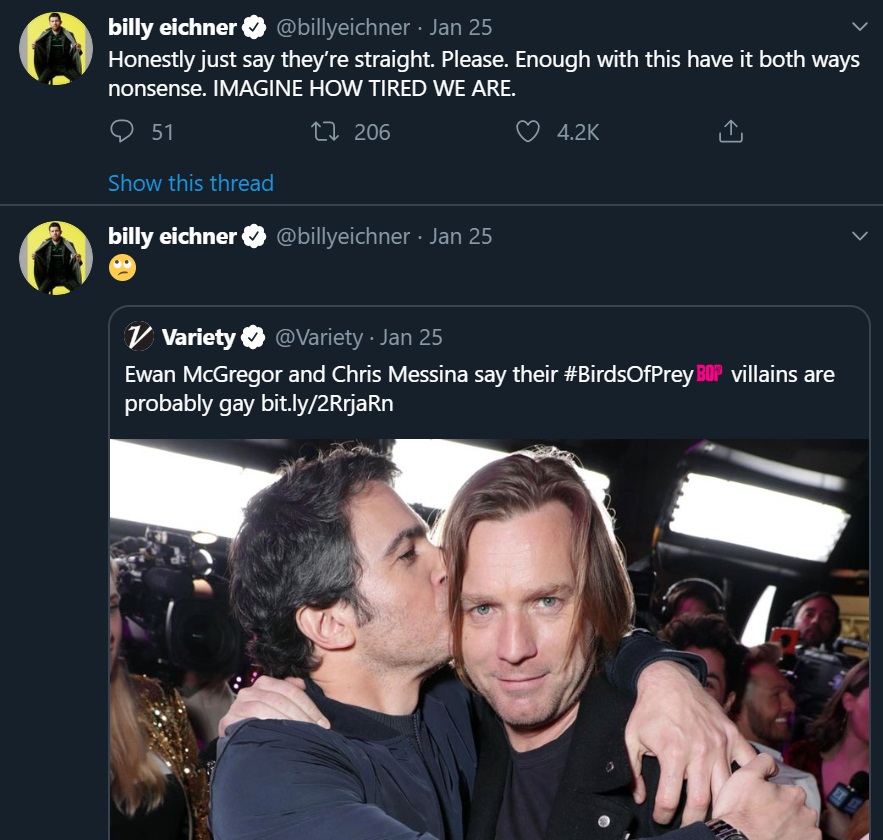 I mean, leave it to Hollywood to create an R-rated film with canonically queer characters (Harley and Renee Montoya), go out of its way to turn Black Mask queer for some reason, and still not deliver.

Say what you want about Deadpool movies, but at least, it made sure the audience knew which characters weren’t straight.

An interesting thing is that YouTuber Grace Randolph seems to be the only one who is honestly tweeting stuff. 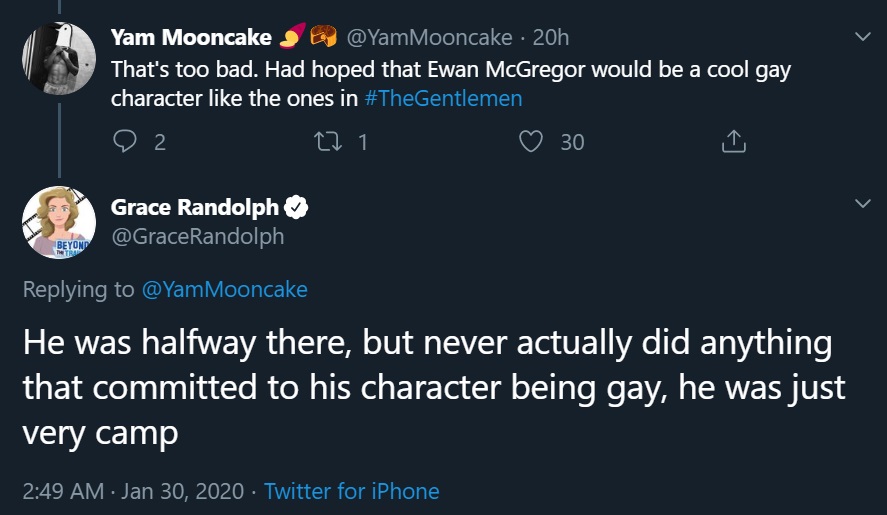 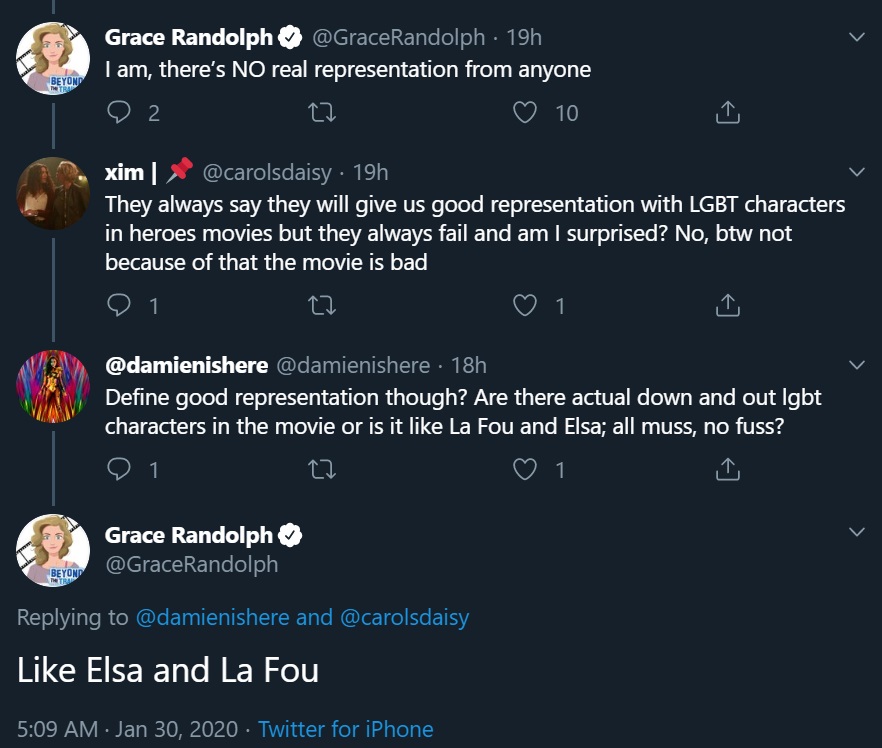 I’m actually surprised other film reviewers who attended the screening haven’t called out BoP for queerbaiting.

A whole lot of them seem to be on the “YASSSS!!! Birds of Prey is the best movie ever!!!” train without taking a second to you know, actually share some kind of review on Twitter.

The entire situation is quite funny. Some seem to be so hellbent on praising Birds of Prey that they are oblivious to tweets shading the film.

The tweet below was even shared by The Mary Sue, and many couldn’t get the joke because again, they seem to have a “YASSSS!!! Birds of Prey is the best movie ever!!!” mindset right now.

It was Randolph who tweeted about it being a joke. 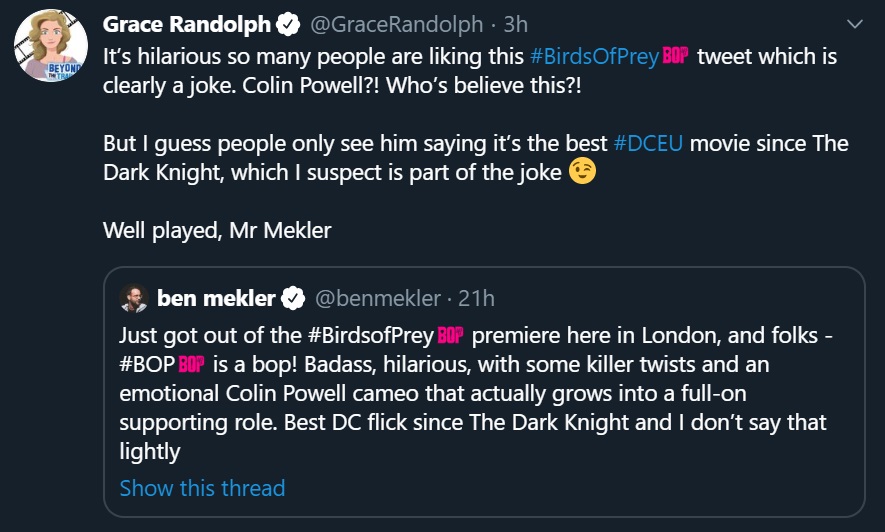 And before you come at me, Mekler was indeed making a joke. So, chill! 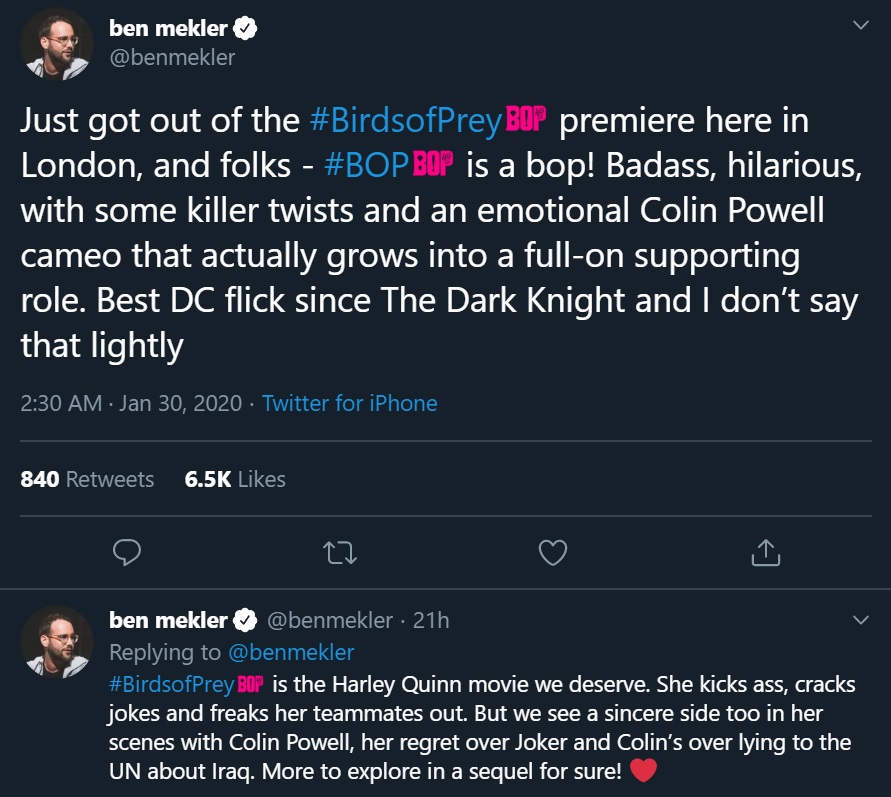 Furthermore, if you go to Randolph’s Twitter, many people (who are yet to watch BoP) have been attacking Randolph for sharing her opinions.

I don’t know about you, but I’m actually thankful to Randolph for making it clear that the movie doesn’t have well-written queer representation.

I do understand some people wanting BoP to do well at the box office. However, what I don’t understand is why some people can’t grasp the concept about others having a different opinion than theirs. Why attack someone online just for not enjoying a movie as much as you did (or hope to do when you actually watch it)?

As far as I’m concerned, there’s nothing wrong with saying how something you enjoyed can still be a piece of content that’s not constructed well for some.

Harley Quinn and the Birds of Prey can be an enjoyable film while not being a good one. Both things can be true when it comes to opinions some people might have. There’s no need to be all worked up about it.

Anyway, I’m disappointed (yet, not surprised) about Harley Quinn and the Birds of Prey featuring no well-written queer representation while still resorting to queerbaiting tactics.

But, it’s up to you if you want to go help it make some money at the box office. I just wanted to share the information.