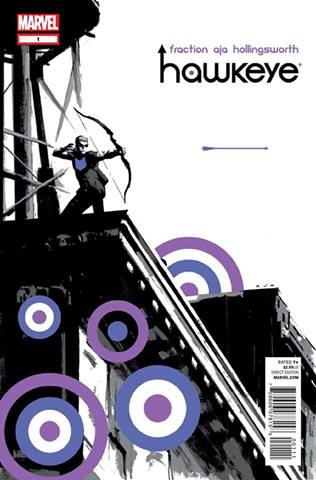 I have been reading comic books since I was seven years old. Though I started with DC Comics, I quickly switched to Marvel after I was given a tattered copy of West Coast Avengers. Granted not the best introduction, but I was hooked. It got so bad, I was spending much more than my allowance would allow each month. By the time I was nineteen, I was spending nearly $100 a month. I knew it couldn’t continue this way. After Civil War, I took a break and stopped cold turkey. Don’t get me wrong, I loved Civil War, but everything had come to a head, and I felt the pleasure of reading seep away and started to dread Wednesdays. I became disillusioned with something that I had loved for so long. During my absence, some of my favourite titles changed, dropped off, or kept going. I did not care anymore and never looked back. 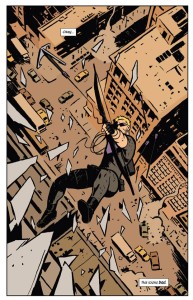 This all changed last year when Marvel released Hawkeye, Volume 4.

A great deal has been written on this book, and if you haven’t read it, go do it now. Hawkeye aka Clint Barton, for those not familiar with him, introduced as a villain in Tales of Suspense #57 in 1964. Shortly after, he changed sides and became an Avenger. There have been a multitude of plot lines over the decades, and he has been represented in both animated and live-action form. Jeremy Renner, who plays Hawkeye in the Marvel Ciniematic Universe is reprising (and expanding) his role in AVENGERS: AGE OF ULTRON due out May 1, 2015.

But what makes this newest incarnation of Hawkeye so different that it pulled me back after so many years?

The art alone is a completely different tone in regard to what we have seen in past marvel comics, and the story is refreshing, showing a dejected Hawkeye living in Brooklyn trying to figure things out. It is definitely more realistic and sardonic than anything seen in a long time. Anything more, and I’d spoil the storyline.

Granted, I am not going to go back to my triple figure habit anytime soon, but Hawkeye has definitely sparked something and enlivened my love of comic books, and therefore renewed my interest in a much loved past time.

Stay tuned for my review.

1 thought on “Hawkeye: My Re-Introduction to Marvel Comics”