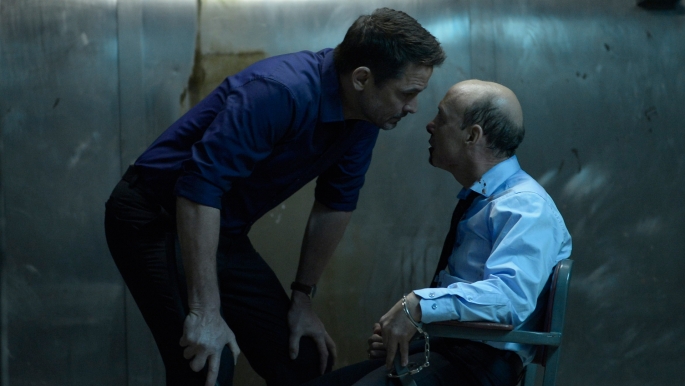 Though the past two episodes seemed to take a step or two backward, one thing I can say for Helix is that it didn’t continue to do so in its season finale. In fact, each week viewers have seen the ticker that displays how many days it has been since the CDC crew arrived at Arctic Biosystems – and it’s always been one day later than the episode before.

Until Dans L’Ombre, that is, which really threw me for a loop when that ticker showed “Day 235”.

That’s one hell of a jump to take in the last episode of the season, and it features Alan torturing another silver-eyed immortal, trying to figure out where “she” is. I feel that this was supposed to make us wonder which ‘she’ he was referring to – but come on, could there really be a question that it’s Julia, especially as she now seems to be the featured protagonist?

The episode then brings us right back to the original timeline, where Julia is shown beating up on The Scythe – who we’re now apparently referring to as just “Spencer”. Basically, the boy assassin knows where our heroine’s mom is being held prisoner, and Julia won’t let him plead the fifth on this one. Finally Alan kicks Julia out of the room, but at this point Dans L’Ombre goes from bad to worse – because she immediately finds Hatake, who is crying over Daniel’s body.

Now, as if several minutes of heart-to-heart discussion between Julia and dear old dad weren’t enough, Helix also throws in a PSA to adopted kids everywhere: Your parents will always choose their ‘flesh and blood’ children over you. I can honestly say that my jaw dropped during that scene, and hopefully it’s clear that this wasn’t for any good reason. Other than that unnecessary ‘reveal’, Hatake and Julia’s conversation seemed to go nowhere, and I was glad when the weirdly cheery opening theme finally cut them off.

When Dans L’Ombre really gets going, it begins with several brief scenes – Anana and Tulok searching for Balleseros (I’m still wondering why Anana cares so much about him), Sarah playing The Great Mediator to the scientists who are holed up in the cabin (where did all of these scientists come from, anyway?), and the CDC people apparently playing ‘good cop, bad cop’ with Spencer (who calls them out on doing so, because they are failing miserably).

Thankfully, there is eventually some plot development. Hatake helps Alan figure out where to find the canisters that contain the virus and the cure – though to be honest, I couldn’t help but wonder if anyone had ever looked in those canisters to make sure that’s actually what they contained. It doesn’t really matter anyway, because Spencer asks whether they’ve seen the news…and as it turns out, the virus – Narvik A, specifically – has already been released in Puerto Rico.

Of course, if you were concerned about Balleseros and Anana…well, I’m not sure why you would be, but if you were, don’t worry. While Alan and company are finding out that all this time, the virus they’d been fighting to contain was already being used out in the world, Balleseros is collapsing within sight of the facility. It seems that Anana and Tulok aren’t far behind, though exactly where they were supposed to be, it was hard to tell. I couldn’t help but wonder if SyFy had blown their budget on Helix before they filmed this scene with Anana and Tulok at the Inuit marker, because it looked like an SNL skit with a plywood backdrop and some grip throwing handfuls of fake snow at them. 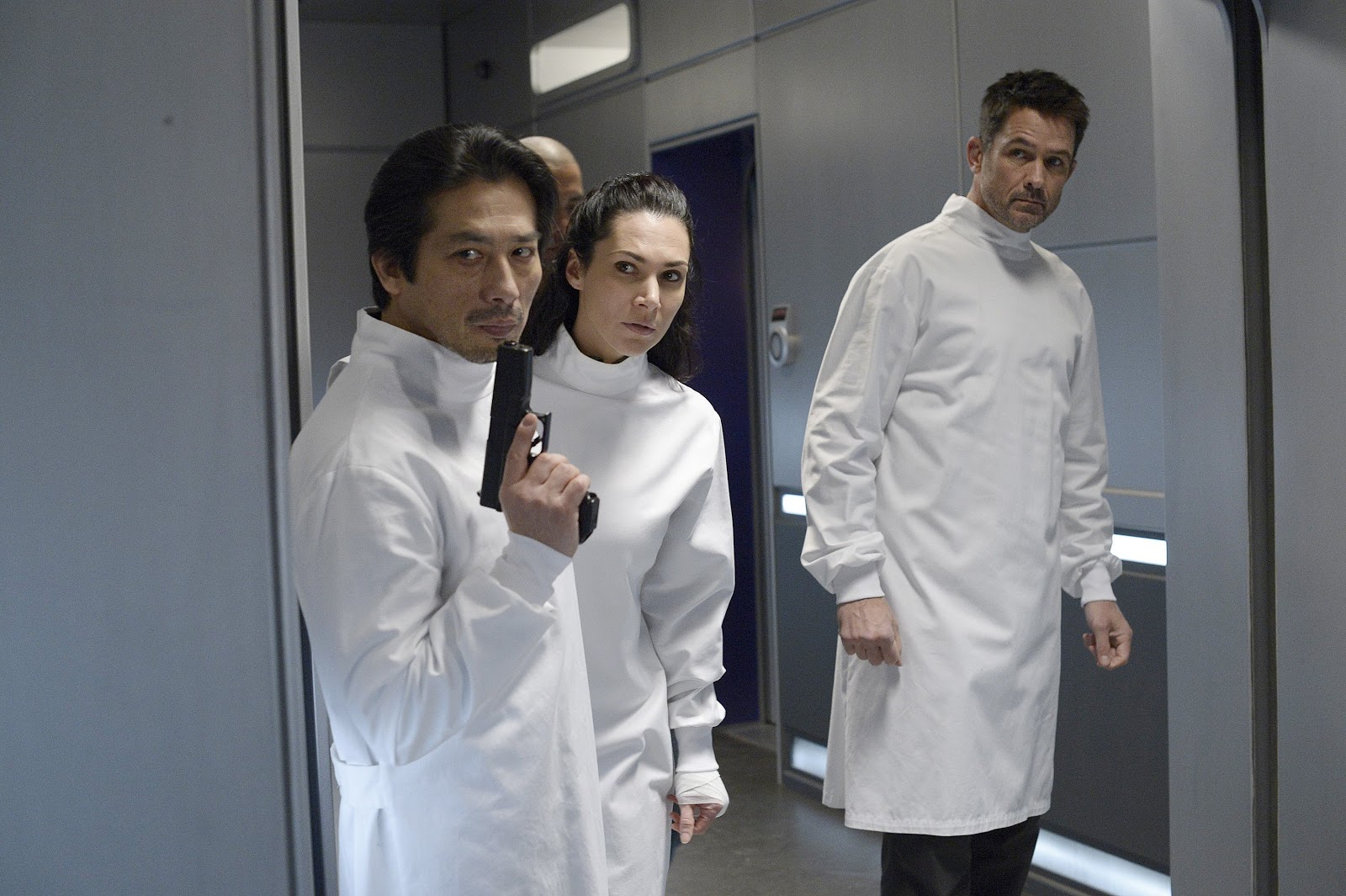 All of their arguing about Balleseros doesn’t matter, anyway, because he’s already been rescued by the one assassin who hasn’t been killed or captured. She expects him to help her finish the mission, which isn’t good for Hatake, Alan, and Julia, who decide that they should just burst in on the assassin, guns blazing (never mind that, even if she were alone, this is pretty much the worst plan ever).

In a stroke of luck – or more likely, lazy writing – Balleseros takes out the assassin and is waiting when the mad trio bursts into the room. While he has a stand-off with Hatake and Alan, Julia immediately drops her weapon and tells him she wants the woman. It turns out that all Balleseros wants is the list of kidnapped Inuit children, though it’s beyond me how he did a complete 180 in the past few episodes, leaving his entire mysterious storyline behind.

Next up is Sarah, who is having herself tested by a hemoglobin specialist. Who has been working in a facility that works with highly dangerous viruses, but hasn’t seen anything as interesting as Sarah’s blood in a long time. He finds something, but Sarah runs away before she can hear what he says – which we know is ‘cancer’. That would throw a wrench in all those conversations about being immortal…

After this, the episode was a bit of a blur to me. Spencer tortures Peter by talking about how Peter has always been second to Alan, and suddenly Helix throws a wrench in everything we thought we knew by revealing that Peter has been working with Ilaria all along! This is the type of twist that drew me into this show when I watched the first three episodes…but they followed it with an extremely drawn-out scene between Julia and her mother.

Maybe I was imagining things, but it seemed like the actors knew how awkward it was as well. Everything about it was uncomfortable – the music, the dialogue, Julia explaining that she and Alan had been married, Hatake’s entrance…so when the Inuits burst in to announce that they would help evacuate the base, I would have cheered had it not been so predictable.

Unfortunately, Peter had freed Spencer earlier, and Hatake believes The Scythe won’t allow them to leave the base alive. “We have to try!” Alan exclaims. Hatake insists, “We are doomed to fail.” But Alan has an answer for everything! In this case, it’s that everything and everyone has a weakness, so they have to try. And Hatake immediately admits that “There is one way. [Spencer’s] only weakness.” It’s pretty obvious that this is his mother, but I couldn’t believe that they would have time to retrieve Sutton’s Head from their museum of severed heads.

Indeed, it seems as if they head right up to the exit. Hatake had given the virus and cure canisters to Alan earlier, and now Alan – for some inexplicable reason – gives them to Julia. Of course she kisses him, and of course Peter sees it happen…I was just waiting for them to show Sarah witnessing the kiss as well. They didn’t, but before I could breathe thanks for that, the hemoglobin guy flags her down to tell her that she’s pregnant. Obviously the immediate reaction to that is, “It must be Alan’s!” Then, “But that was just a few days ago. Is it Alan’s?” I for one got caught up in that thought process until the exit doors opened and there stood Spencer, remote detonator in hand.

Personally, I believe that Dans L’Ombre could have (and probably should have) ended there. Instead, the assassin that they’ve spent the past few episodes gushing about makes yet another stupid move. He could have grabbed Julia and fled, but he stays behind to brag that he’s won. And just for good measure, Julia’s mother – who the writers apparently wanted us to care about after about 10 minutes of screen time in the season finale – tries to sacrifice herself for her daughter, and Spencer kills her in the process. This finally spurs Spencer into leaving, but Alan is close on his heels and throws something into the helicopter. When Spencer realizes that it’s his mother’s head, he is distracted long enough for Julia to give Alan one of the two canisters. 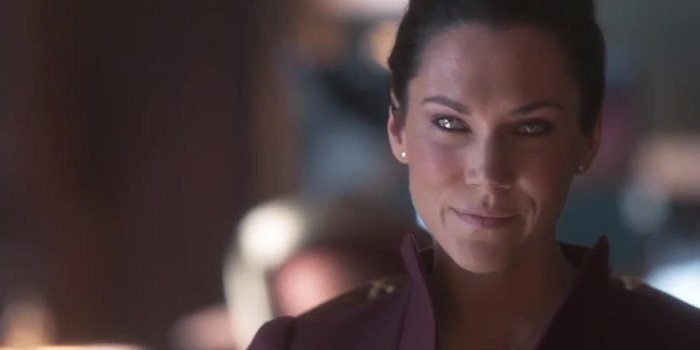 Two hundred and thirty-five days later, Alan has apparently tortured Julia’s whereabouts from his prisoner…and he’s working with his two-faced brother to find her. I do need to be serious for a moment and say that these new mysteries behind Peter are what would make me watch a second season of Helix – though I was also intrigued by the closing shot of Julia, who is apparently now the leader of the silver-eyed immortals council (or whatever it is, because that, along with so many other things on this show, was never clearly explained).

The first season of Helix has been full of ups and downs. They could do without a lot of the over-sentimental and/or clunky dialogue, and someone who knows how to write a character arc would be beneficial as well. Too many people changed their actions, goals, even outright personalities at the flip of a coin. And there were a lot of seemingly important plot lines that were cut off – will they be brought back, or left undeveloped?

Apparently Helix returns for its second season at the beginning of 2015, so hopefully we will find out.