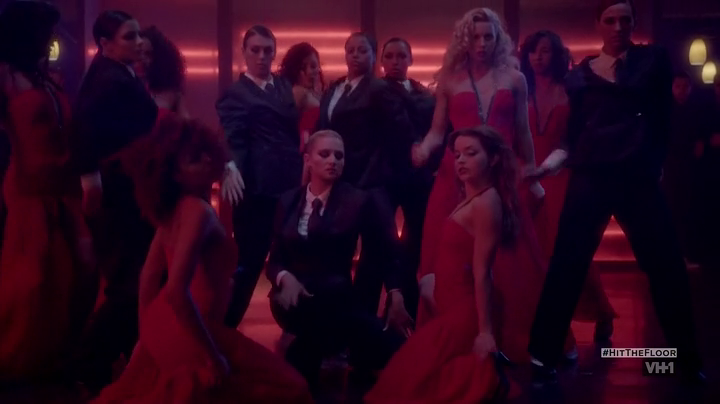 This week’s episode of Hit the Floor was all about surrounding almost the entire cast in trouble, and I lived for it. With only four more episodes to go, “Carrying” set up a lot of things for the future.

Ahsha (Taylour Paige) just can’t seem to catch a break. I would’ve felt a bit more sorry for her if most of the trouble she’s in wasn’t her own fault to begin with. Being stuck between German and Derek isn’t good for her, and “Carrying” proved that in spades this week. German knew that she was cheating on him with Derek, and that led to the two men confronting each other. The only smart thing that Ahsha did this week was keep away from her angry boyfriend. When a murderer tells you to leave before he loses his mind, you run the heck out of that place, and Ahsha complied. Things are just going to heat up between those three, and someone is definitely going to get hurt.

Jelena (Logan Browning) and Terrence’s happiness took a hit. A girl named Rennae came into picture and said she was carrying Terrence’s child. Jelena got the girl to take a paternity test and the results came out positive. However, it is Hit the Floor and that’s why I’m still not sure if the baby really is Terrence’s or not. Jelena has one of the best lines when things aren’t going her way, and “Carrying” was no different.

Kyle’s scam to make a horrible movie about her life backfired. I knew that was going to happen and it did. I don’t know how she’s going to get out of the current predicament, but it’ll be fun watching her try. Lexi came back to expose Kyle and Raquel’s scam marriage, but her plan didn’t go as expected. With how things worked, and Kyle being comfortable with kissing Lexi, I have a feeling the show is foreshadowing Kyle and Raquel eventually hooking up. I might be wrong but it would be awesome to see those two realizing they love each other more than just friends.

Sloane is a mess right now. Oscar played her good and she is trapped. Whatever she said during “Carrying” only worked to make her look guilty of murdering Olivia. Even Pete looked unsure when he was helping her. Will Sloane be able to clear her name? It does seem a possibility, especially with Ahsha knowing that German’s the real killer. 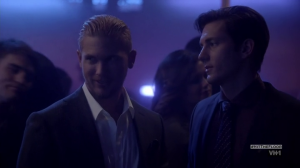 Now, let’s talk about the couple that breathes life into countless fans, and makes angels sing…Zude! I don’t care what kind of trouble those two get themselves into as long as they’re in it together and come out unscathed. With his star on the rise, Zero’s all about exploiting the “gay dollar”. His tactic did make me cringe a bit because it’s a fact that a lot of people, both queer and straight, exploit the heck out of the LBGTQ+ community. And I’m glad I wasn’t the one who thought that during the episode. But then again, it is business and when it comes down to it, actual queer and supportive people exploiting this part of the market are far better than straight people who don’t care about said community.

The party that Zero (Adam Senn) threw, with help from Raquel, also made for a very entertaining dance number. It was all about queerness and I liked it. So, good job team!

Trying to make money and exploiting the “gay dollar” did come back to bite Zero a bit. He agreed to write a tell-all but he was hesitant to talk about his past. We don’t know a lot about Zero’s background and that’s why I’m looking forward to seeing what events made Zero the way he is. It was also a very sweet Zude moment when he revealed that Jude is the only one he was willing to share his past with.

Speaking of Jude (Brent Antonello), he also had a lot to do in “Carrying”. He didn’t fall for Oscar’s trap when he tried to play with his emotional vulnerability. Jude is a smart character and I want to see more of that. He is a Kinkade after all. While things didn’t work out with his father, it was nice to see Lionel’s love for Jude. She straight up threatened Zero to not hurt Jude and it was amazing!

Quote of the Week: “You should leave now. Traffic’s a bitch.” – Jelena to Rennae.

What did you think of Hit the Floor this week? Does Terrence have an unborn child? Will Sloane be able to clear her name? What’s the story behind Zero’s past? Let us know.