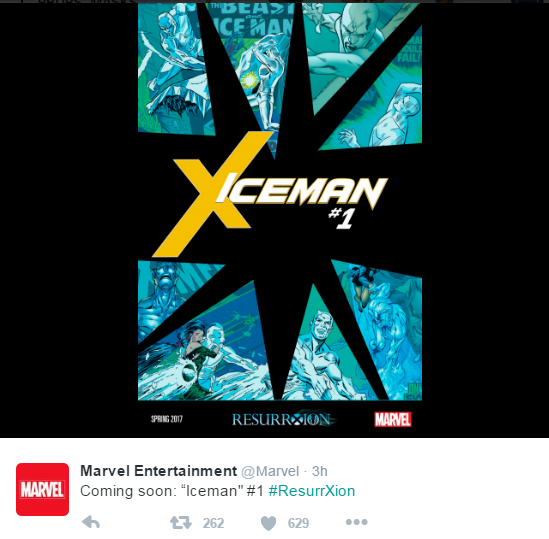 Marvel is giving Iceman his own solo in spring of 2017. The upcoming series is part of Marvel’s ResurrXion event.

While DC Comics currently has Catwoman and Midnighter and Apollo, with a Batwoman solo in the works, Marvel doesn’t have any titles with a lead LGBTQ+ character. However, the comic book company is trying to change that. A Miss America (Young Avengers, The Ultimates) solo series was recently announced. Now, Iceman will be getting one as well. No creative team is attached to the project as of yet. We also don’t know if the series will star the present version of Bobby or his past self.

A young Bobby came out as gay back in All-New X-Men #40. He later confronted the present timeline Bobby in Uncanny X-Men #600. After that, the two mutants have been busy with their respective teams. While the present version of Bobby hasn’t had any time to explore his sexuality after coming out the closet, the younger version recently met an Inhuman love interest named Romeo.

Iceman’s the founding member of the X-Men. He was the youngest member of the team and over the decades he has grown to become an Omega-level mutant. He made his debut in 1963 and has been part of numerous teams since then.

While he did have two limited solo-series, one in 1984 and the second in 2001, this will be the first time he’ll lead a solo after coming out. I do feel that the present version of Iceman will be the star of the upcoming series, with the past version showing up in few of the issues.

Marvel is remaining tight-lipped about the ResurrXion event. All we know is that it’ll occur after the Inhuman vs. X-Men war. So, I have no idea what kind of problems Bobby will have to deal with in his solo.

What are your thoughts about the Iceman solo series? Let us know.

One thought on “Marvel Gives Iceman A Solo Series For ResurrXion In Spring 2017!”