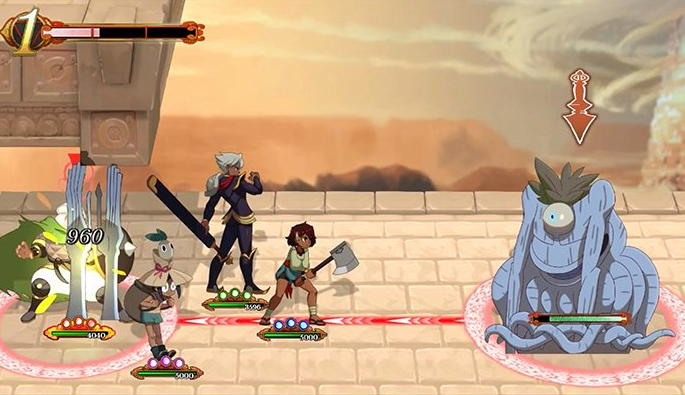 After playing the Indivisible backer preview, all I can say about this RPG is that everyone should check it out because it’s just so awesome!

I was provided a free copy of the Indivisible backer preview for reviewing purposes. The opinions are my own.

I’ve been looking forward to playing Indivisible ever since I wrote about it coming to Nintendo Switch. The backer preview shows some of the gameplay mechanics, the beautiful designs, a number of characters, and more.

A classically-influenced RPG/platformer hybrid, Indivisible tells the tale of Ajna, a good-natured tomboy with a rebellious streak. Her life is thrown into chaos when her town is attacked, awakening a mysterious power in her – the ability to absorb certain individuals into her being. She embarks on a quest to confront the warlord who destroyed her home, uniting people from far-away lands along the way, discovering new aspects of herself and her world in the process.

Recently released, the Indivisible backer preview starts with the player controlling Anja. The plot consists of Anja trying to catch her pet, Roti. During the course of the preview, you’ll get to familiarize yourself with the fight mechanics, the 2D environment, wonderful background music, some enemies, and a handful of characters to have in your 4-member party.

The character designs are impressive. They each have their own personalities, fighting style, and set of abilities. It’s up to you which character you want in your party as you continue to recruit them. My party consisted of Ajna, Qadira (good for defense), Dhar (an Earth-elemental fighter), and Ginseng and Honey (the cute little healing duo).

If you visit the official website, you’ll see that this game will have a lot more characters, even though they all didn’t show up in the backer preview.

While I wasn’t able to stream myself playing Indivisible, you can easily find gameplay videos of the backer preview on YouTube. I highly recommend that you check them out and see for yourself why the final release looks like it’ll be a very fun RPG.

There were a lot of areas to explore in the backer preview. I also had to backtrack once I found the appropriate weapons to unlock new areas. I also had to make Ajna jump a lot during my progress. I’m not a fan of jumping (just give my character a ladder) but I can see how other players might enjoy it.

I didn’t encounter any bugs, which was very impressive to me considering how a lot of final releases from huge game studios end up having bugs and glitches.

You can read all of the details about the Indivisible backer preview here. There are two speedrun contests you can take part in. The deadline is December 15, 2017. The winner of each contest will get some cool prizes. I’ve seen some players finish the preview in approximately 40 minutes. I ended my first run in more than an hour. All that jumping and climbing, sigh!

You can go ahead and pre-order Indivisible. Developed by Lab Zero Games, and published by 505 Games, the title is set for a 2018 release.