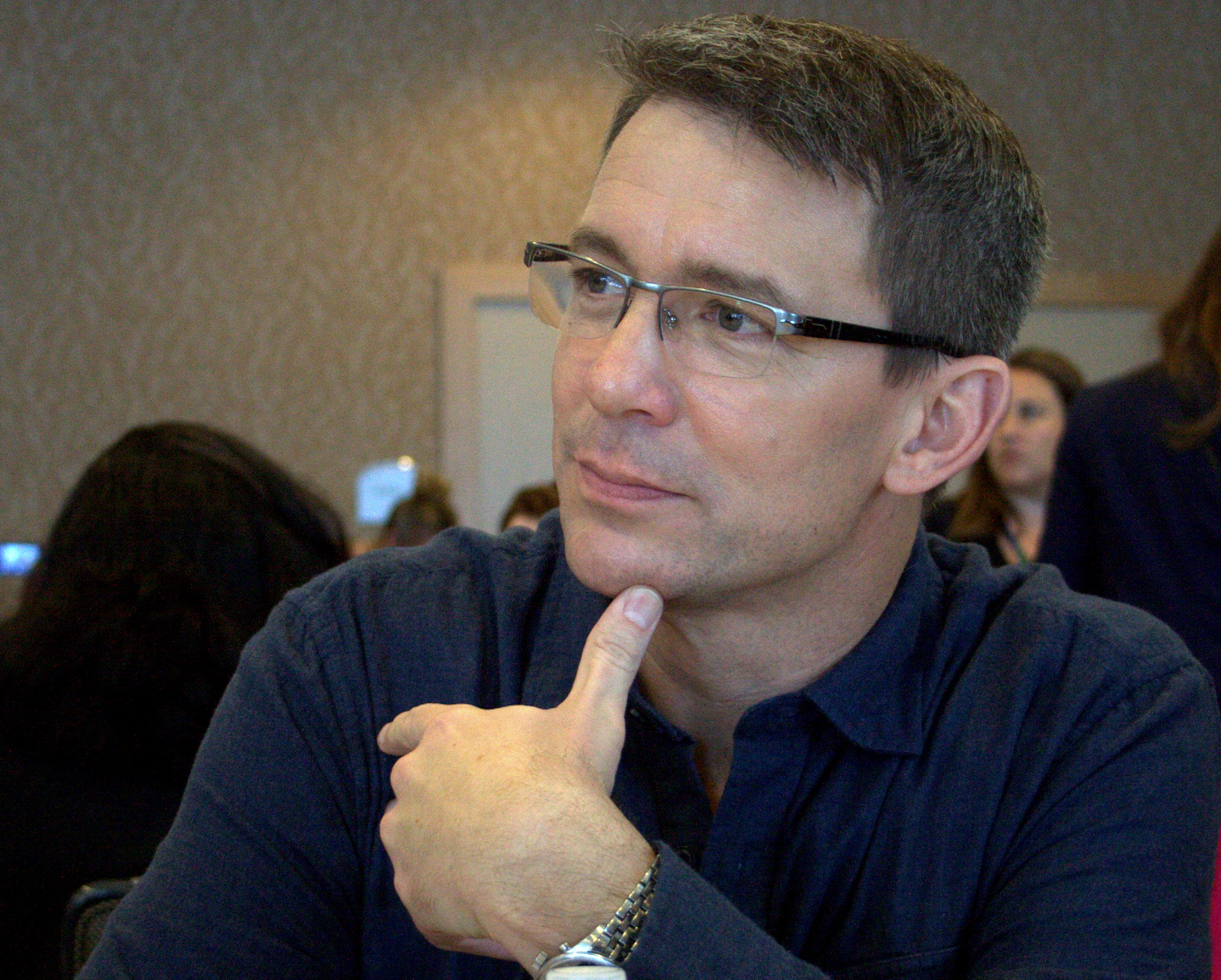 I was grateful to be able to chat with the creators and cast of iZombie at San Diego Comic-Con this year and gain insights into the inspiration behind the show.  I was especially pleased to talk with Rob Thomas, the mind behind another fan favorite show Veronica Mars.  I’m a new Marshmallow, only having discovered the show about a year ago, but it was his ties to Veronica Mars that initially got me to tune into iZombie.  He had a lot of great things to say about the show and how they’ve approached the comic book adaptation.

Q) They say it’s based on the comic but it’s almost more inspired by the comic.  […] How did you choose what elements you wanted to pick from and did you get any push back from DC?

Rob Thomas: We did not get any push back and I honestly – if there’s amazing elements in all of this – it’s how supportive and lovely the creators of the comic book have been, too, because I was terrified that they would hate what we done to the comic book. […] In the comic book, she worked in cemeteries digging graves […] They also have multiple monsters too. Ghosts and were-terriers, a whole bunch of different [things] – and it really plays with the supernatural. True Blood [has done] the multiple monster thing […] I like a lot of zombie stuff. I almost always like the ones that are a virus. I like fake science more than I like supernatural. I never quite know how to write supernatural. It feels like you can [make] a magic spell [that] can make everything go away. And people write it well. I love Game of Thrones and I love bits of magic they have in it and yet as a writer I feel like, “Oh, I don’t pull out of the tool box.” Like I will screw that up. So, weirdly big science, I’m on board for. Supernatural, I don’t quite know what to do with.  So that was hard, I made that change.

I would say that [the way] the show was originally approached to me, was the head of developers at Warner Brothers, Steve Papazian, this [while] I was busy editing Veronica Mars. Again I had already pulled a pilot for Fox and I had no time. If you kind of came to me and put the cover of the person I saw on my desk and said, “CW needs some kickass female hero, this is it. We need the next Buffy, we need the next Veronica.” And the way this was put to me, it was the cover of the comic book they wanted. There was never like, no research, we want all the stories in there, it was like look at this girl, you know? And it was a funny thing because, one of the things you struggle with in the writer’s room is that all the other zombies smartly go under cover. They tan, they dye their hair. It would make things much easier for Liv if she would do similarly. [We were] hoping that at Comic Con there would be people dressed up like Liv and that that would be the poster and that would help sell the show. Because so much has been done, based on that comic book, the original comic book cover. And I love that was one thing I was really really happy to give a nod to the comic book. I was so pleased with how our main title came out that we could make that nod back to the source material and Michael – and I couldn’t love our title sequence more than I do.

Q) We love to see the cast of characters from Veronica Mars. Will we see Kristen or Enrico maybe in the future?

Rob Thomas: I hope so. Right now with a brand new baby, I don’t think we’ll see her in season two, but she’s game for doing it. So I think somewhere down the line it will happen. We do have a Veronica Mars joke in episode one, so it’s like she’s there in spirit. In fact we originally wanted Rico to play the head of Max Rager picking up for that and I couldn’t love Steven Weber more than I do, so I’m really pleased. But we originally [went] to Rico for that. That will also happen. […] In the first episode of season two, we have an actor named Adam Rose who probably did a half dozen Veronica Mars [episodes]. He [was] dating Mac in season three of Veronica Mars.

Stay tuned for more news from iZombie.  The cast had great insights into their roles on the show and I’m eager to share.