steWhen major jerk-wad Kevin invites Stevonnie to give his titular “Kevin Party” some flair, Steven agrees on the desperate hope that he may finally be able to reconnect with Connie. 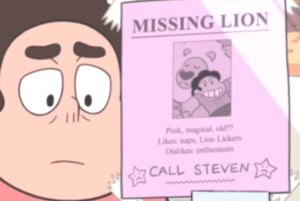 Things are glum for Steven. Connie still hasn’t spoken to him, and Lion is missing too. When Kevin, literally Steven’s least favorite person in the entire universe, shows up, he’s not interested in giving him the time of day. It’s the promise that Connie agreed to come to the “Kevin Party” that makes Steven logically deduce that she’d only agree if she hoped he would be there, meaning that on some level, she did want to speak with him. When Kevin realizes the two have “broken up”, he becomes Steven’s wingman, desperate to mend their relationship so he can ride Stevonnie’s coattails. It’s a bit of a nice situation reversal. Twice Kevin was responsible for breaking Stevonnie apart; now he has to bring them back together.

… only he really sucks at all kinds of emotional intimacy. 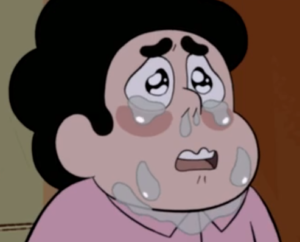 All Steven wants to do is rush up to Connie and apologize. The thought of him immediately sends him crying, and Kevin holds him back, saying that, “You can’t just dump your emotional honesty face on her.” He makes passing reference to someone called Sabine who rejected him, and it’s the first moment of genuine sympathy for the guy yet. It really is a shame who got his heart broken, but someone who will reject you after you bare your soul probably isn’t worth it in the first place. Connie and Steven are a whole ‘nother situation. The very first time they met had Connie crying at the bottom of the sea from loneliness, and when Steven went all snot-nosed on Connie in “Full Disclosure”, she accepted him immediately. Both of them know what has to be done here, but have been thrown so off-kilter they don’t act upon common sense.

While the overbearing feeling of this episode is extreme awkwardness (in the best, most necessary of ways), it’s also got some really good gags. The telephone number exchange, Kevin’s repeatedly calling Lion a dog, and Derek’s offscreen rivalry all helped to alleviate the angst of “Kevin Party”.

When at last Steven approaches Connie, his attempts to play it cool comes off as incredibly stilted, and he knows it. Connie’s burst of anger when she finally loses her own cool is wonderful– as is Kevin’s spluttered indignation when he realizes this wasn’t about dating, but being best friends. It’s a gentle poke at those parts of the fandom frustrated that Steven and Connie haven’t gotten together yet, but more importantly, it’s a reinforcement of the importance of platonic love. These kids’ relationship with each other is utterly important to them, no matter how they define it. Either way, mutual respect and clear communication is key, and that’s something Kevin still just doesn’t get. 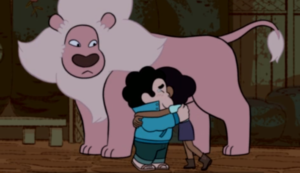 The resolution is incredibly cathartic. For all that’s she’s looking very grown up with her new hair cut, Connie admits that she didn’t handle her anger in the most mature way. “It didn’t make any sense– I didn’t make any sense,” she babbles, explaining why she couldn’t make herself respond to Steven’s texts, even when she wanted to. Steven, for his part, it quick to reassure Connie that she was right, and it was wrong of him to have betrayed their partnership and downplay the severity of what he did. When they finally embrace, there’s tears in their eyes, but smiles on their faces.

This is one of those rare times in Steven Universe where we’re given a concrete time-frame: Steven has not spoken to Connie in “a few weeks”. While I completely understand both the kids needing space and their attempts to figure it out, the person I really for bad here is Lars. We audience members may or may not know how he and the Off Colors are doing depending on if you saw the SDCC sneak peak (link contains major spoilers), but Steven does not have that luxury. For all he knows, Lars has been tracked down by killer robots. Can’t help but feel he should have sent Connie off a text saying, “Look, I understand if you don’t want to talk to me, but at least bring Lion back so I can provide aid to the guy trapped in space.”

Of course, that can’t have happened because the writers wanted everyone to have time process their feelings before we go back to the high-flying space adventures, but still.

Stevonnie doesn’t reappear in this episode, and I’m glad. It would have been too fast. Steven and Connie have reconciled, but they still need to discuss things, and will only fuse on their terms. But as Lion carries them away by running across Kevin’s swimming pool, they still bring a special spark to the party– because Stevonnie’s magic lies in the strength of their relationship.