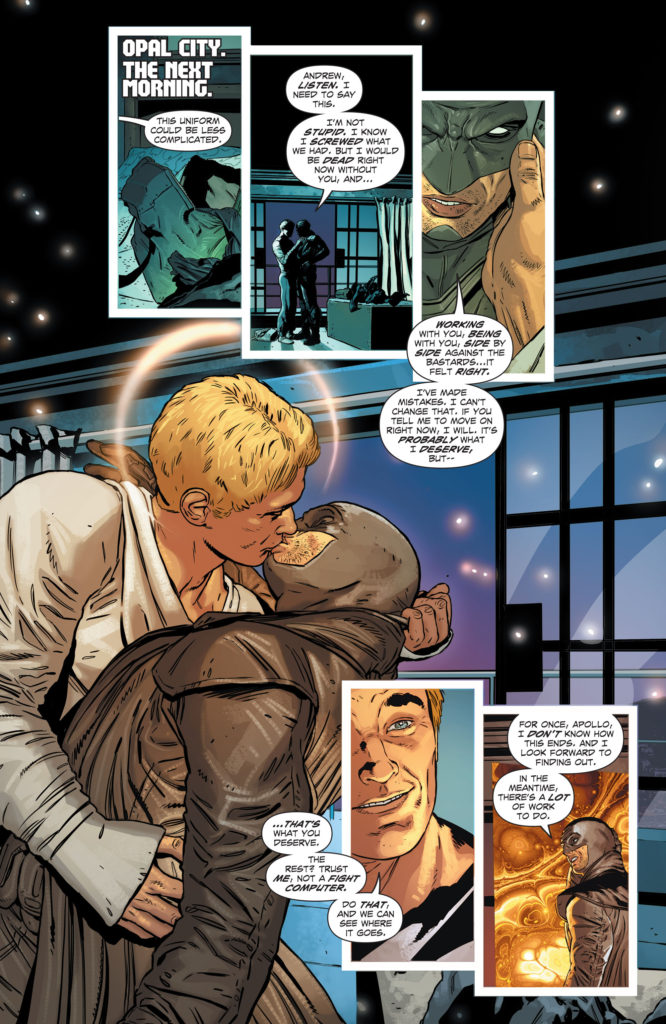 DC Comics’ gay characters, Midnighter and Apollo, are getting their own mini-series this October as part of DC Rebirth.

Both Apollo and Midnighter made their debuts back in 1998. They are considered to be gay analogues of Batman and Superman in the comic book world. The two characters dated, married, and even adopted a child. However, due to the DC Comics world being rebooted, most of their history was wiped clean.

Midnighter got his own solo series in June 2015. The series picked up the story after Apollo and Midnighter had broken up, and it was written by Steve Orlando. The series ended after twelve issues this year.

Now Steve Orlando is back working on the Midnighter & Apollo six-issue mini-series. The events will pick up after the finale of the Midnighter series, and will serve as the next chapter in the couple’s relationship.

“Midnighter and Apollo have spent time apart—figuring out who they were when defined on their own instead of by their relationship,” said Orlando during DC’s press release. “They have a firmer idea of who they are and they’ve become stronger and more confident together. Midnighter and Apollo are back to remind the world that it truly is a bad time to be bastards. This is the World’s Finest Couple—kicking back and making each other better than they are on their own.” (via IGN)

Steve Orlando identifies as bisexual, and Midnighter has played an important role in his life. “Getting to write a character that helped me when I was younger and boost the signal to a new generation has been an honor.” (via The New York Times)

I don’t know if the upcoming mini-series will lead to bigger roles for both Apollo and Midnighter in DC Rebirth. But knowing that we are getting a story that will focus on these two characters has me looking forward to reading it.

What are your thoughts about the Midnighter & Apollo mini-series? Let us know!