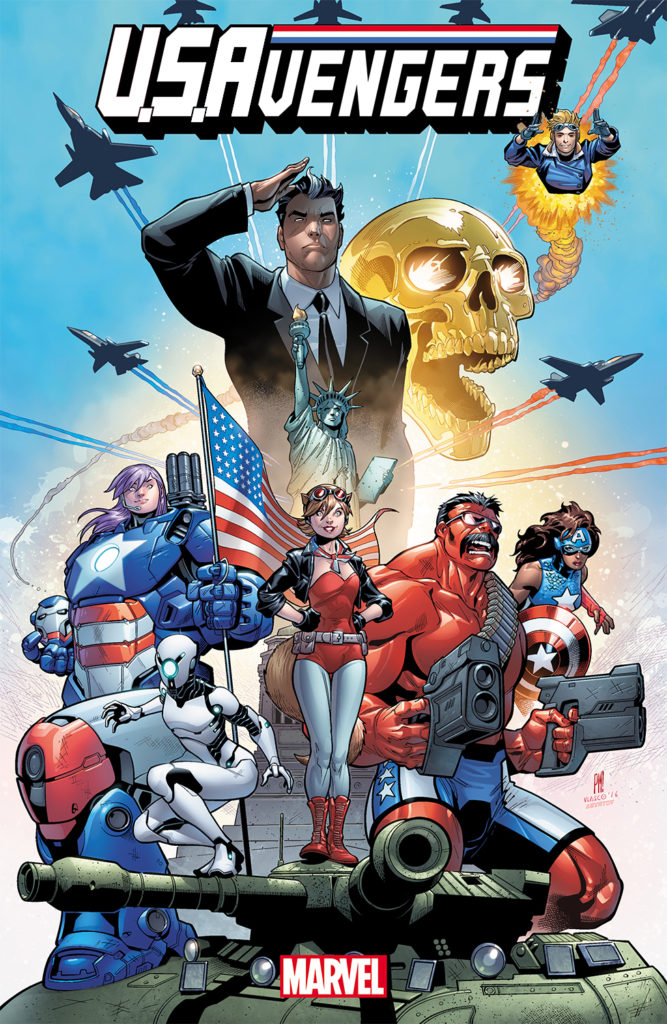 It’s dark days in the Marvel Universe. What do you do when S.H.I.E.L.D. – the world’s first line of defense – can no longer be trusted? How will the United States function without a super-spy agency that has its best interest at heart? Introducing the U.S.Avengers!

A brand new Marvel title, debuting this December, will introduce the world to the U.S.Avengers. Formed by billionaire playboy Roberto da Costa (who you all may know as Sunspot), the U.S.Avengers are a part of the new S.H.I.E.L.D.-like organization tasked with keeping the world safe. American Intelligence Mechanics (A.I.M.) is fully endorsed by the government and completely prepared to save the world and have fun doing it. 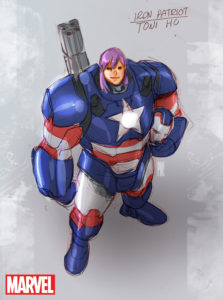 The series, written by Al Ewing, will also feature an all-new Iron Patriot, a Captain America from the future, Squirrel Girl (and her scurry of squirrels), Red Hulk, and Cannonball, just to name a few.

So, with all of the team-ups happening in comics, and with the ever-increasing lineup of comic book movies, why should any of us be excited about this latest superhero team? Well, for starters, that future Captain America I mentioned? She’s Danielle Cage, the daughter of Luke Cage and Jessica Jones. And that all-new Iron Patriot? Dr. Toni Ho. I don’t know about you guys, but I’m kind of interested in seeing some traditionally male superheros get a nice shot of estrogen. Watching women of color take up the mantles previously occupied by men will be a treat. I’m anxious to see how it all plays out.

Not only that, but I’d like to see how writer Al Ewing deals with the idea of patriotism, particularly with nationalism on the rise all over the world.

I’m interested in America, in exploring the reasons I like your country and love your citizens. I don’t think patriotism should be uncritical or unthinking — we’re seeing in Britain where that leads, and it’s horrible. I’m afraid for us. But that urge to love and care for the home you’ve made, whether you were born to it or chose it or fled to it, that’s worth something. People use it as a weapon, but it’s also an engine that drives great positive change in our communities.

An American-themed Avengers – prepared to “defend freedom, democracy, apple pie, bald eagles and the electric guitar” – led by a Brazilian and written by a Brit? I don’t know about y’all, but I can’t wait.

3 thoughts on “S.H.I.E.L.D. Can No Longer Be Trusted – Introducing the U.S.Avengers”