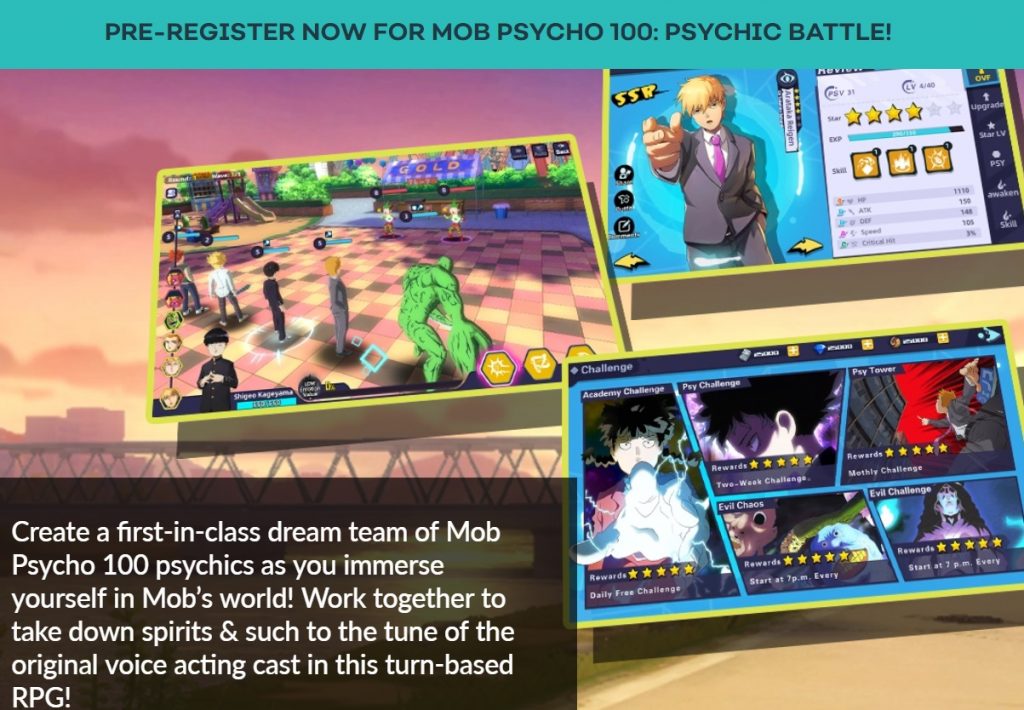 Fans of Mob Psycho 100 have a new iOS and Android free-to-play game to look forward to from Crunchyroll Games. I know certain fans of the franchise are waiting for an actual console game, but as fans, we sometimes have to make do with what we get, right?

Crunchyroll Games is a subdivision of the anime streaming service Crunchyroll. The said subdivision is planning to launch the upcoming Mob Psycho 100: Psychic Battle mobile game in Fall 2019.

It will be available in the U.S. and its territories, Australia, New Zealand, Canada, Denmark, Finland, France, Germany, Ireland, Netherlands, Norway, Sweden, and the United Kingdom.

You can go ahead and pre-register for the game right now on the Crunchyroll Games website.

The title has been described as an “original, turn-based RPG mobile game, allowing fans to interact with and use powerful psychic moves alongside their favorite characters from the show.”

It will feature the original voice actors as well as follow select elements from the first season of the show.

Furthermore, it will boast full 3D graphics and “will allow players to build a team of their favorite five Mob Psycho 100 characters. Each character will have a special move set and a corresponding animated cutscene ahead of their special attack.”

Players will also have the opportunity to explore and battle in classic locations from the franchise’s universe.

In more interesting news, a playable demo for the game will be available at Crunchyroll HQ, the company’s offsite at Anime Expo over the July 4 weekend in Los Angeles.

Mob Psycho 100 is a Japanese webcomic created by ONE (the same creative force behind One-Punch Man), which began publication on Ura Sunday on April 18, 2012, and concluded on December 22, 2017.

Over the course of two anime seasons, a total of 25 episodes have aired. A brand-new OVA titled Mob Psycho 100 II: The First Spirits and Such Company Trip – A Journey that Mends the Heart and Heals the Soul is set to publicly release on Crunchyroll on September 25, 2019.

Previous:Toynk Toys First-Wave of SDCC 2019 Exclusive and Debut Items Revealed! (UPDATED)
Next: One Punch Man 2×12 Review: “The Wiping of the Disciple’s Butt”