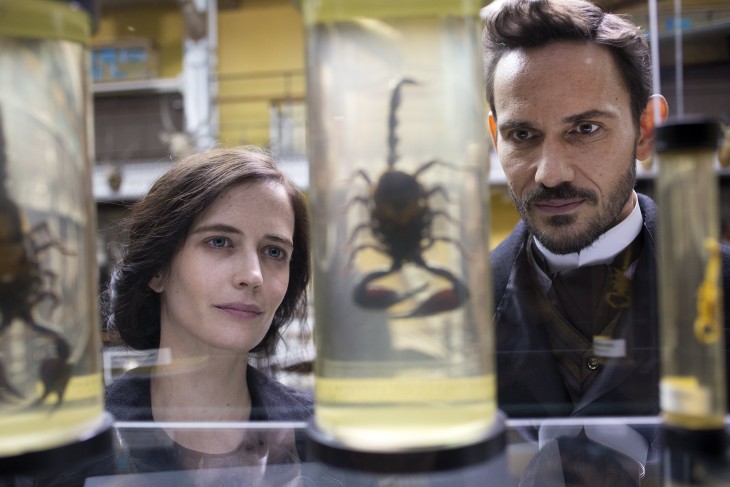 Penny Dreadful is back! It has been a long hiatus, and our favorite horror series seems to be paying a lot of fan service, but in a good way. “The Day Tennyson Died” gave us a lot of new characters for the series, but they are old favorites to twentieth century literary fans.

I need to start by saying that I hated the fact that our Dreadful family broke up at the end of season two. Part of what makes this series so great is that all of the main characters have this great close-knit relationship that helps keep each other safe. When they decided to go their separate ways last season, it seemed to me that the series would be headed in a very dark direction. The show is always dark, but without that family there for support, all of our favorites are extremely vulnerable, particularly Vanessa.

Although most of the episode took us around the globe to catch up with what our Dreadfuls have been up, Vanessa was clearly the focus of “The Day Tennyson Died”. At the beginning of the episode, she was the living embodiment of what fans have gone through during hiatus: sad and alone. On a serious note, though, she was not doing well at all. Her surrogate family had left her right as she was at her most vulnerable, and she obviously was unable to cope with being alone. Those first few moments of her unable to even leave her bed were heartbreaking; those of us who have suffered from depression at some point could find those emotions completely relatable. Leave it to Dr. Lyle to break her out of her funk. One of the most endearing facets of this series is that our Dreadful family is made up of outsiders, but they find solidarity in each other. Lyle’s words were exactly what Vanessa needed to hear, and for a few moments at the end of the episode, we got a glimpse back into that lightness that she had in the middle of season two. Eva Green is an absolute pleasure to watch as she seamlessly glides back a 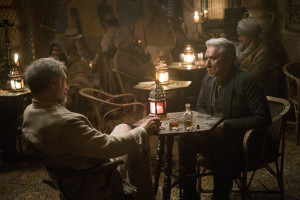 nd forth between complete low and absolute high. And I love love love the seemingly new friendship she has with the zoologist at the museum. I ship that.

As I predicted when the season three trailer was released a few weeks ago, Patti LuPone’s Dr. Seward indeed has a connection to the character she played in season two, the Cut-Wife. It remains unclear at this point if Dr. Seward knows the connection, but Vanessa definitely recognized her and put two and two together. I was interested to see if and how the characters would be linked since they are being played by the same actress, and I was pleasantly surprised with the outcome. I look forward to the continued mentorship that LuPone’s characters have with Vanessa.

As for the other characters, let’s break it down. I was definitely shocked and taken aback when we were introduced to Ethan’s breakout party in New Mexico. Although I am totally invested in Ethan and his storyline, I found the train scene to be unnecessarily violent and bloody–and that is saying something for a horror series. It seems clear that Ethan’s family is powerful in the territory to compel such a dramatic escape plan, but we didn’t really get much more information. And was that Hecate on that train? I could not really tell, but it looks like Evelyn’s daughter has followed Ethan all the way to America.

I did like that Ethan’s story overlapped with Sir Malcolm’s in Zanzibar as we were introduced to Kaetenay, a new character played by Wes Studi. I actually enjoy that we are getting a Native American story intertwined into Ethan’s background, but it already seems like the writers are playing into stereotypes, which I am not a fan of. When Kaetenay scalped the woman who was attacking Sir Malcolm, I rolled my eyes. Can they just not? I guess they are going there. I will try to reserve too much judgment at this point, since he was onscreen for about two total minutes, but I will be keeping an eye on this storyline.

Even though we got zero Lily and Dorian in this episode, we did get to see Victor and learn a bit about him. Like Vanessa, he is not doing well in London without his surrogate family. He is clearly addled with drug addiction, but I am hopeful he will snap out of it after reuniting with his old friend Dr. Jekyll. I 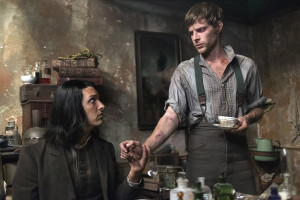 might have let out a small squee when Jekyll arrived on the screen, and I like that their relationship is all about science. I am also interested in the plan that the two of them are devising to take down Lily. This will surely not end well for either one of them, and Lily will undoubtedly come out on top as she usually does.

I am a big John Clare fan, so I was happy to catch up with him in the Arctic (Antarctic?). It appears that he might be getting some of his memories back from when he was alive which is a very interesting development. But why on Earth did he kill the child? I know that he meant to put him out of his misery and provide a quick death, but it seemed out of character for him to do it. I am glad to see that he got out of the bad situation and seems to be heading back to London. I need our Dreadfuls to be reunited ASAP.

That brings me to the final story that was introduced in the episode–Dracula. That’s right, our favorite literary vampire will be playing a role in season three, and it looks like he will probably be the big bad of the season. I was spoiled about the Dracula storyline being added, but I was kind of hoping that they would not add it at the same time as all of the other unrelated stories that we have going on just now, but hopefully they will all be intertwined again as was successfully demonstrated in season two. I just don’t want this show to get too convoluted because I really think we are getting on the verge of that. Just so many characters!

Overall I thought this was a great season opener. We caught up with most of our main characters and got a huge share of Vanessa, which is always the best part for me. I will be very interested to see where all the storylines go this season–there will be a lot to cover!