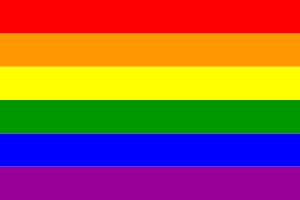 I like webcomics. For their creators, who often aren’t seen as publishable by mainstream comic presses, they offer access to an audience without having to compromise their aesthetic or goals. Audiences get the benefit of accessing them for free, though I would encourage fans to offer donations whenever possible. There are a few downsides. Updates can be be slow and/or infrequent since most people who make webcomics must financially support themselves via other means. Hiatuses occur and sometimes stretch on indefinitely, leaving you wondering if the author is doing ok. However I think that webcomics are absolutely worth engaging with. Where else are you going to find princesses teaching ogres to dance or characters asking a mermaid to put a shirt on? If you’re new to webcomics, or just looking for some more to get into, I’ve put together a list of some of my favorites. Some things to keep in mind while reading this: I am personally interested in diverse fantasy and science fiction webcomics with a heavy emphasis on queer main characters and those interests are reflected in my recommendations. In addition, most of the webcomics I have recommended here are still in progress, although they do seem likely to be continued and eventually completed. 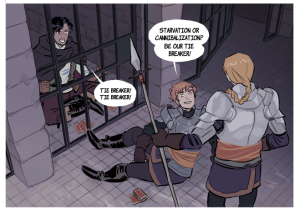 Knight’s Errant Pavane contains blood thirsty mercenaries, trans characters, people of color, bi (or pansexual or polysexual, labels were not used) characters, and characters of various religions. All of whom are main characters who play an important role in the action of the story. The art is genuinely gorgeous and the plot always leaves me wanting more in the best possible sense of that phrase. It was originally started as Knight’s Errant (KE) which is still available online, and then it was rebooted as Knight’s Errant Pavane. It’s written and drawn by Jennifer Doyle, AKA theyoungdoyley. Both are worth reading but in terms of plot KE is further along (unless substantial changes are made to it, which is possible) so if potential spoilers bother you, you may want to avoid it. As a warning, KE contains physical and emotional child abuse. KNP will presumably also eventually contain the same level of abuse, as well as the violence that one might associate with blood thirsty mercenaries.

Presented almost entirely in pastels, Band vs. Band by Kathleen Jacques is an absolutely adorable comic that is everything you’d expect from the title: rival bands. They have rock offs, and their lead singers are queer women with massive foe yay, as well as crushes on each other. There is at least one trans character and she, while not precisely a lead, is certainly not just a background character. There are also bisexual (again; or polysexual or pansexual as labels were not used here either) characters. In case you aren’t convinced that you need to read this immediately yet, one of the bands is called The Candy Hearts and the other is The Sourballs. If you want to check it out keep in mind it is still in progress and it updates on Mondays. 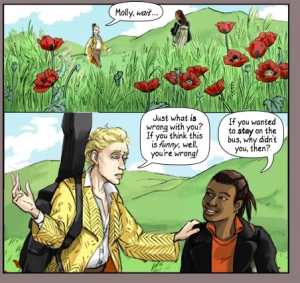 Dicebox is science fiction and it focuses on the lives of two migrant (at least initially) factory workers named Griffen and Molly who are platonically (queerplatonically, possibly) married for tax/health care/etc. purposes. Griffen uses she/her pronouns but is very possibly non binary (From some of the things she has said as well as what the author has said). Molly sleeps with people of different genders but hasn’t textually labeled her sexuality as far as I know. There is a non binary pronoun, peh, which is used commonly in the webcomic. There are also a bunch of trans and queer characters who are less central as well, at least fifty percent of whom are POCs. The characterization is extremely strong, even for those who get less screen time and the art is beautifully detailed. The plot is all twists and turns but it never seems like the creator, Jenn Manley Lee, has lost track or control of it. Molly sees things which other people cannot perceive and it’s implied not to be mental illness, which is fairly common in fantasy and science fiction whereas Griffen seems to deal with an unspecified actual (as I recollect) mental illness or illnesses and there is at least one scene of somewhat graphic self harm. 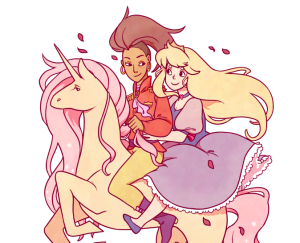 Written and illustrated by Katie O’Neill, Princess Princess is a short comic that is, shockingly, about two princesses and they totally end up together. It also contains cookies, baby dragons, and a unicorn. It was originally posted in pink, yellow, and black but the completed comic is in full color.  There are background and lead characters of color. Additionally both the lead characters are women and they express their gender in different ways, and all of those ways are treated as ok by the comic. One of the lead characters, Sadie, has an abusive sister and I would put a fairly strong content warning on that element. It also contains some sizeism, which isn’t condoned by the narrative but is directed at a character who visually reads at about the same physical size as the other human characters. 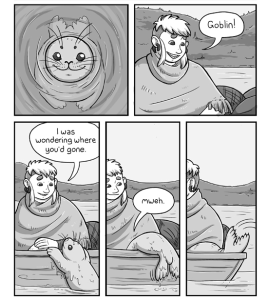 The next webcomic, Eth’s Skin by Sfé R Monster (with the exception of the inks which are done by Kory Bing, who has a webcomic called Skin Deep), is set in a fantasy version of British Colombia where the main character, Eth, lives in a floating town made of interconnected rafts. Eth is non binary and has a pet pygmy seal named Goblin. Also featured in the comic is a mermaid named Miira who knits. Monster has confirmed that the cast is one hundred percent queer. The webcomic is still in progress and the plot, which centers around Eth’s journey to put things right after they accidentally take a selkie skin, is heating up. The art is in grey scale and the style is clean as well as having a lot of personality.

All of these webcomics are works of love by their creators and if you have the means to help support them fiscally (assuming that they have items to purchase or a tip jar or a Patreon) then by all means do. Otherwise spreading the word about these comics will hopefully make them more likely to continue as well as encouraging other artists and writers to start more queer webcomics. I’ve warned for the common triggers that I noticed but please feel free to comment if I missed something. If you have recommendations for queer fantasy or science fiction webcomics I haven’t mentioned here I’d love to know about them.