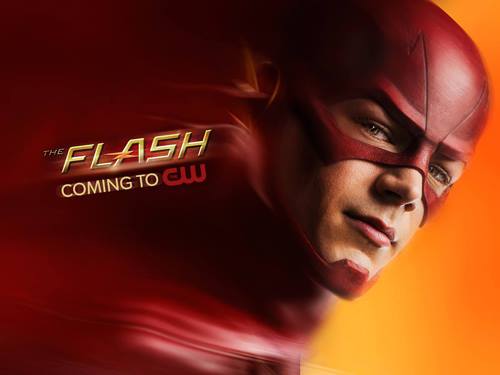 One of the pilots shown at the Paley Center in NYC this past weekend was The Flash, the spin-off from the CW’s Arrow. Barry Allen, like Oliver Queen, is an iconic pre-existing character drawn from decades of comic book stories. As with Arrow, The Flash takes these familiar elements and creates its own version for the tv series. There’s plenty to enjoy for fans of the comic book characters (with plenty of easter eggs and shout-outs to a sprawling comics canon), while also being inviting towards viewers who have never read a comic book, but want an entertaining show to watch. The pilot episode of The Flash is engaging and fun, with likeable humor mixed with the action and emotional elements, and some eye-popping visuals. There are a few things that work right out of the gate and few things that need some work. However, this is from the same creative team as Arrow. The pilot of The Flash has momentum, effectively and swiftly setting up its believable and appealing lead hero and the people in his life.

When it comes to superheroes, I’ve always leaned more to the non-powered type, although as a DC fan, I’m familiar with the different 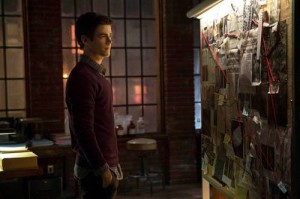 speedsters, from Bart to Wally to Barry. I admit Wally is my favorite, from reading the 80’s Teen Titans series and from the animated series Justice League Unlimited, so my knowledge about Barry is a bit less. Watching the pilot, it was partly with pre-knowledge and preconceptions of who these characters should be, and partly going in cold. The mysteries drew me in (I’m already theorizing) and there are plenty of surprises in the pilot, despite the large amount of promotional material and clips that are already circulating. Grant Gustin brings a mix of innocence, heroic presence, and awkwardness to Barry (who also reminded me a bit of Wally West, so that this Flash seems to be a little bit of a merging of the two characters). Gustin seems natural for this role and it’s going to be very interesting to see Barry tested. The Flash is a bright superhero, in personality and costuming. There’s no lurking on rooftops or gravelly voice to intimidate, but Gustin conveys the sense of power contained in Barry, and the pain and confusion beneath the amiable surface. 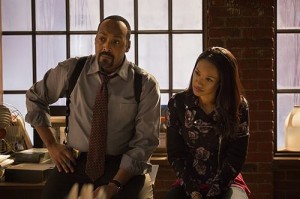 The ensemble cast is strong. Jesse L. Martin stands out especially as Detective Joe West, Barry’s adoptive father and the father of Iris West (Candace Patton). Candace Patton is delightful, and Iris is clearly smart and self-reliant. However in the pilot she seems relegated primarily to the sympathetic best friend/unattainable love interest role. It’s not yet clear to what degree she’ll be integrated into the plot in her own right. While it’s important to show the hero has people to care for, it’ll work better if Iris is there for more than Wally to crush on and worry about. It’s hard to tell based on one episode, but as we’ll learn more about all these characters, I expect Iris to emerge more fully as well. 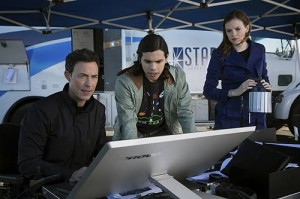 Danielle Panabaker as Caitlin Snow and Carlos Valdes as Cisco Ramon play off each other nicely as the scientists assigned to study and look after Barry. Team Flash clicks right away, with Tom Cavanagh bringing an intriguing, more somber presence as Harrison Wells. The relationship between Wells and Barry should be interesting to see unfold. John Wesley Shipp (who played The Flash in the 80’s tv series) as Henry Allen, Barry’s father, is spot-on casting, and I hope we’ll get a lot more scenes between the two. Barry’s three mentors, his father, his adoptive father, and Wells, offer pillar-like touchpoints for the show and for Barry.

While grounded with emotion, consequences, and the dangers of having this kind of power, The Flash also captures the sense of wonder in superhero stories. There are downsides to Barry suddenly discovering he’s the fastest man alive, but there’s an excitement too. A narrative doesn’t have to be unrelentingly dark to be believable and emotionally compelling. Barry Allen is both eager and reluctant hero–he says he’s always wanted to make a difference, yet is completely astonished at the tools now at his disposal: his own body. He’s very much a hero fully occupying the world he’s trying to save. We can see that along with the upbeat aspects, there is the struggle as well. How Barry adjusts to his newly gained powers, deals with his inner griefs and insecurities, pushes towards and even beyond his own limits, and lives his life should make for a compelling journey.

The Flash premieres Tuesday, October 7 on the CW.

One thought on “Review: The Flash Pilot — Living in the World You’re Saving”