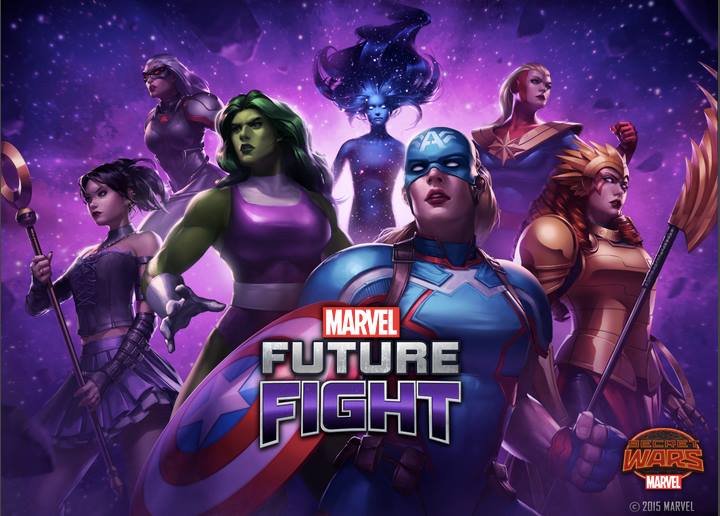 Not only has Secret Wars changed the face of Marvel’s comic book universe, it has also made its way into Marvel Future Fight. So, is the new content any good? Let’s find out!

One of the best things I found about the Secret Wars update was the three new female characters introduced from A-Force. This means you can now play as She-Hulk, Singularity, and Nico Minoru/Sister Grimm. If you haven’t been reading A-Force then you should. It’s written by G. Willow Wilson of Ms. Marvel fame and is awesome.

The three new characters can be unlocked by spending crystal gems to buy Biometrics in the Store or by winning them as rewards through the new Battleworld feature, which I will get to later.

The rest of the changes include new Secret Wars based skins for already existing characters. While the new skins give some boosts to a character’s ability, I would advise not buying them if you are short on funds. There’s also a comic cover collection system that rewards players with skill improvements.

The new Alliance System is another thing I liked. It makes interacting with other players easier, and it is fun to join an alliance, or make a new one, consisting of your friends.

Now on to the bad stuff that has gotten some heat from angry players. While Villain Siege wasn’t an easy task to begin with, the new update has made it even tougher. The new Secret Wars-based stages are extremely difficult and will no doubt urge fans to spend some cash to strengthen their heroes to tackle them. I know games need to make money, but actually withholding content from a lot of players unless they spend real cash is unfair. 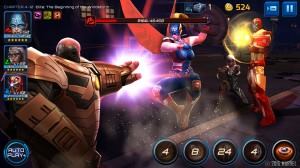 Coming to Battleworld, it is a new playable feature that provides a different fighting experience to the players. You select your team of heroes and then fight opposing players in a 2-on-2 relay tag battle. The only I thing I didn’t like about it was that you can’t see the level of your opponent and more than once you’ll end up facing a team far stronger than yours. It also costs 10 energy points to enter a battle.

Another annoying thing is the changes made to the Honor and Chaos Token Shops. You can’t buy Biometrics for the heroes you want because instead of Hulk and Captain Marvel, the rest of the heroes have been put in chests. It costs 165 crystal gems for a single chest, and even then the hero Biometrics (ranging from 1-3) you receive are random. There’s a good chance you’ll be end up spending numerous crystals for only a handful of Biometrics of your favorite hero.

Also, even though the X-Men, Fantastic Four and Deadpool are part of Secret Wars, they are nowhere to be found. I have no idea why none of these famous characters have been introduced yet. Is Marvel not interested in adding characters, whose film rights Disney doesn’t own, in the game?

I have been playing Marvel Future Fight for a few months now and I need my X-Men fix!

Here’s to hoping Netmarble, the developer of Marvel Future Fight, listens to the fans’ reaction and make some much needed improvements.

Have you played Marvel Future Fight yet? What did you think of the new Secret Wars (version 1.4.1 update) content? Let us know!

Previous:Junjou Romantica 3×7 Review: The Darkest Place Is Under the Candlestick
Next: Teen Wolf 5×10 Review: Status Asthmaticus