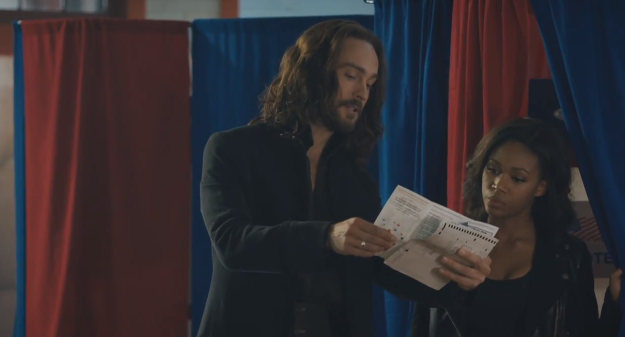 Can’t you just be Abbie and Ichabod walking around bantering for an hour? Also, can they act any more married? Poor Katrina has no chemistry with her husband and while, as a feminist, it hurts me to see what could’ve been an engaging and complex character (a Quaker? A witch? Hell yes!) waste so much potential. 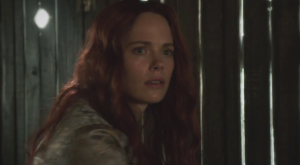 She’s so boring, she’s like a blank canvas upon which the Sleepy Hollow writers throw misfortune and gendered violence. A demon pregnancy? Please. That’s the last thing I wanted to see in my beloved Sleepy Hollow. If you’re not aware, pregnancy via possession is a long used metaphor for rape and it essentially allows a space where a female character can be raped… but it’s okay, because it’s make-believe demon spawn. So you shouldn’t be offended or upset, am I right? Wrong. Katrina may be boring but she does not deserve to experience this brutality at all.

Henry, played by John Noble, is a solid villain and is one of the best actors in the cast. His interactions with his “parents” are still tense and well-acted, especially since these scenes could easily be hokey. Of course, only Abbie, like the viewer, seems to see through the ridiculousness of Ichabod and Katrina insisting that Henry is still their son and deserves their love and compassion. Okay, I get that Katrina gave birth to him but they never raised him and until several months ago, Ichabod didn’t even know he existed. Also, he’s literally the Horseman of War. How can they possibly feel anything akin to love for him? Can Ichabod and Katrina finally see Henry for the villain that he is?

Overall, the entire atmosphere of this episode was a jarring change of pace. It was dark in a thoroughly unpleasant way and felt not only cruel but poorly written, as well. We’ve grown to love Ichabod and Abbie (and feel a begrudging indifference for Katrina) and these characters deserve a lot better. Yes, the episode did not include Hawley (thank God) but honestly, I would’ve gladly taken him over this demon pregnancy trope.

Aside from Ichabod declaring, “I must Internet,” and Abbie’s reminder that things weren’t better in his time (especially for women, people of color, etc.), there were very few highlights in this rather messy episode. I was sorely disappointed and can only hope that next week’s is an improvement.

What did you think of the latest episode? What are your thoughts on Katrina?

Previous:Check out Paranormal author Toi Thomas!
Next: The World of Ice & Fire: A Must for Every George R.R. Martin Fan