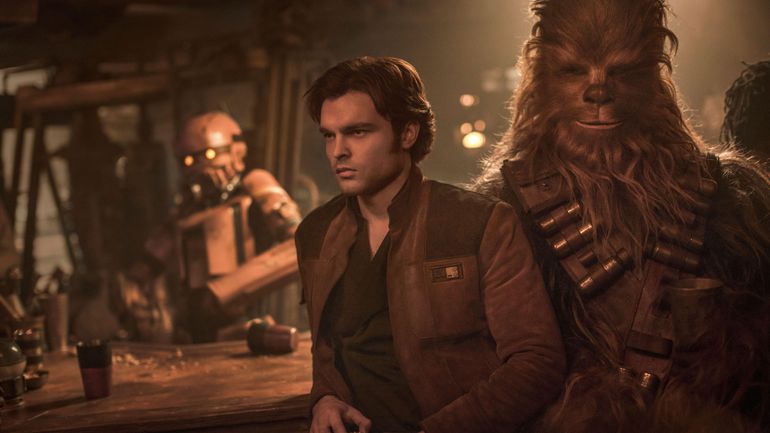 Now that the box office numbers have been released, we can finally state Solo: A Star Wars Story just couldn’t live up to expectations. Of course, people are coming forward with different explanations for the film’s disappointing performance. Let’s break them down to try and figure out what happened.

Disney ended up lowering the box office forecasts by quite a lot as Solo reached the May 25, 2018, US release date. Turns out the latest installment in the Star Wars franchise couldn’t even meet those projections. According to Box Office Mojo, Han’s solo adventure came in with a low $84.7 million 3-day gross and a $103 million 4-day gross for the Memorial Day weekend. So, what happened?

Many fans and box office pundits are trying to figure out what led to a new Star Wars movie performing so poorly. Was it Star Wars fatigue? Angry fans? Too much competition? Was the audience just not interested? Was it a combination of everything?

Let’s buckle up and cover some of it!

Too many Star Wars films?

I understand some fans wanting the Star Wars franchise to be a December-only event and thus have Disney release one film a year or even less. However, the MCU is able to release more than one film annually, and they do impressively well at the box office. But yes, considering the foreign numbers the Star Wars franchise is able to bring, I wouldn’t mind getting a single SW film every two years. While I’m not the biggest SW fan out there, I kind of hold the franchise to a higher level than the MCU and don’t want to see it being transformed into a quick cash grabbing machine and fail in the process.

While some trades and fans are saying blockbuster fatigue is kicking in, Dave Hollis (the head of Disney distribution) shared that with Disney’s Star Wars just being four movies in, saying the current box office numbers for Solo were due to Star Wars fatigue isn’t the answer.

“We have a lot of work to do in trying to understand this,” said Hollis. “We are all over it and will spend a lot of time digging into why things happened the way they did in various markets. We have a year and a half before Episode IX comes out.”

Get rid of Kathleen Kennedy?

The audience losing faith in a franchise is kind of similar to how the DCEU is being perceived. The poor performance of Justice League made Warner Bros. rethink how to handle DC Comics-based films moving forward. Time will tell if Disney will make Kathleen Kennedy course correct the SW franchise, too.

For certain fans, she has ruined Star Wars, especially because she isn’t seen as a fan and wanted to turn the franchise into something she would enjoy rather than what the mass fandom would. Certain fans are still unable to get over how she treated Luke Skywalker in The Last Jedi.

While a portion of the fandom did laugh at salty fanboys over their reaction to The Last Jedi, their frustration is a reason which led to the Solo boycott. Now, while I’m not sure how much the boycott was able to hurt the film, the fans who boycotted are taking the Solo box office performance as their win, and I wouldn’t be surprised if the boycott continues to affect Star Wars: Episode IX unless the fandom feels Katleen Kennedy is making certain changes. Some fans even suggest Dave Filoni should be brought in to help.

People who did go and see Solo enjoyed it (make sure to read our review). However, the fact certain fans didn’t even want to go and watch the film says something about how they feel about the current state of the franchise.

Allow me to direct you to the video below by an amazing YouTuber named Grace Randolph. While I don’t always agree with her opinions, I appreciate her research skills and how she backs everything up with facts. Her video below sums up a lot of reasons that seem to have played a role in Solo not doing well.

She even touched upon Deadpool 2 dropping 60% during its second weekend, with the film not being able to appeal to a wider female demographic being a reason.

Please share your theories about why Solo: A Star Wars Story couldn’t do well at the box office. Do you think Kathleen Kennedy and Disney will admit certain fans have a problem with the current state of the Star Wars franchise and their disapproval might mean poor numbers in the future?

I look forward to reading your thoughts.