THIRD TIME’S THE CHARM: THE GAMERS SERIES FINALLY LIVES UP TO ITS POTENTIAL 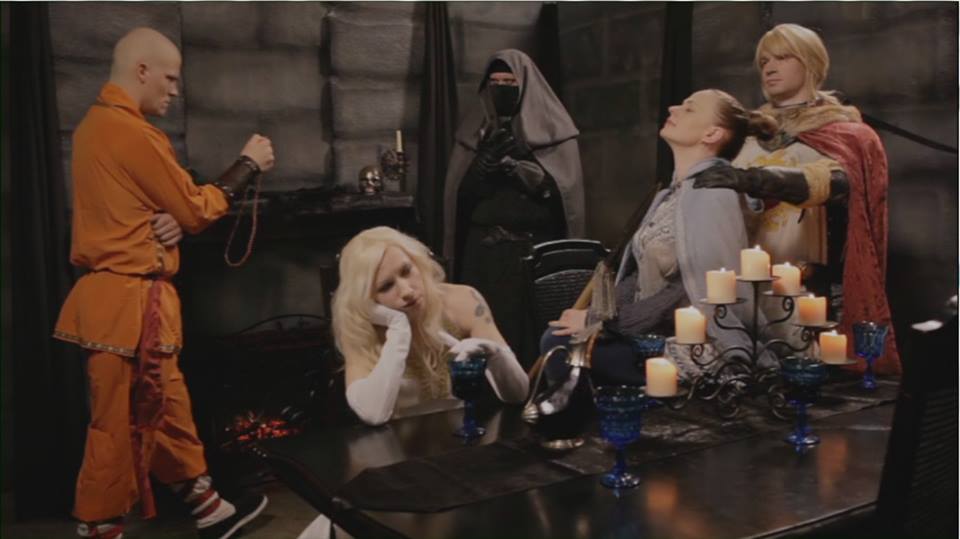 Of all the cool stuff I could talk about to kick off this column, why an obscure DVD of a web series that had a Kickstarter nearly 2 years ago? Two reasons: I love talking about stuff that deserves a wider audience; and for a movie that features a (still? Really?) male-dominated fanbase, it does a great job addressing gaming culture’s treatment of women. Oh, and it’s pretty hilarious, too.

When a friend in my gaming group wanted to show us his just-arrived DVD of The Gamers: Hands of Fate a few weeks ago, I was less than excited. Several months earlier, he had screened the first two Gamers films, and I remember being unimpressed. The original Gamers film, from 2002, had a great idea behind it: show the actors as both D&D players and acting out their characters in “in-game” scenes to highlight the absurdity of players who prefer the numbers on their character sheets to involving themselves in the story (a.k.a. “min/max-ing”). But the finished product was strictly amateur-hour: nobody knew how to act or direct yet. The sequel, Dorkness Rising from 2008, was better, but suffered from having way too many game publishers involved in its production, burying it under the weight of in-jokes and inaccessibility.

Since the rest of my gaming group wanted to watch this latest Gamers, I was prepared for the worst. But it didn’t take long at all to see that Hands of Fate was different: What’s this: camera movement? Well-timed editing and jokes? A script that focuses on theme instead of plot? Could this actually be good?! 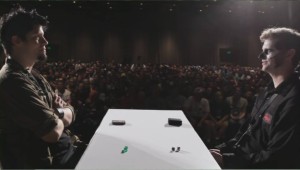 It turns out that this film is very good indeed. The story smoothly and clearly juggles several overlapping character storylines, from a couple that has very different ideas about the state of their relationship, to an RPG player who learns a collectible card game to try to impress a girl, to a fanboy slowly driven mad by a Pokemon-like mascot he blames for the cancellation of his favorite TV cartoon series. With these somewhat basic story ideas, Hands of Fate could have been a cliched disaster; but it makes the most of these simple set-ups to land some great jokes and make some excellent points about the state of American gaming culture. And its huge fanbase ensured that the filmmakers could shoot a decent chunk of the movie at GenCon, one of the world’s biggest gaming conventions: not an easy feat.

Despite its professional quality, this movie retains its D.I.Y. feel and makes room for the kinds of goofy digressions that would never make it into the final cut of a Hollywood film. The humor has a strong Monty Python/Kevin Smith vibe, but it comes across as more inspiration than rip-off, even with a couple of obvious Reservoir Dogs and Matrix parody moments. There are plenty of nice, small touches that put this above typical “fan-made” material, including a running joke about a giant turnip that made me chuckle repeatedly.

For the most part, the characters are well-defined, with clear motivations rather than the two-dimensional predictability of past installments. The female characters are a bit less realistic, likely because the story (like the previous two) was written by men who probably didn’t get enough feedback from real-life women before shooting. I didn’t mind Joanna (played by Carol Roscoe) being freaked out over mistakenly thinking her boyfriend Kevin Lodge (played by Nathan Rice) intends to propose to her, because it gives those characters a chance to develop and grow. (A good chunk of this subplot is in the Extended Edition, but that version adds a lot to the characters and improves the film’s gender balance tremendously: it’s really the only version worth watching.) Their story arc highlights the theme in most traditional fantasy that women are “prizes” and their love must be “earned” by men, and just how ridiculous (and funny) that can seem today. 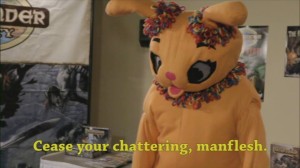 The character of Natalie (played by Trin Miller) could have used a bit more polish; too much of her dialogue was just a reaction to the men around her. Granted, some of it was really funny:

Cass: “I’m Cass, and you have already turned tonight’s fortunes completely around.”

The funniest characters are probably Cass (played by Brian Lewis, as a Ryan Reynolds-type obnoxious smartass/accidental hero) and Gary (played by Christian Doyle). Doyle rules every scene he’s in, as a man haunted by the cancellation of his favorite childhood cartoon who blames it all on a loveable Japanese cartoon character and stalks a cosplayer to get sweet, cathartic revenge. He has the chops for theatrical comedy work, and I’m looking forward to seeing what he does in the also-Kickstartered Dark Dungeons.

At first, some of the dialogue and terminology in the movie comes across as inside baseball, but it all fits together well, and as long as you’re paying attention it all makes sense. (Though the film also rewards repeat viewing, to pick up what might have made less sense the first time around.)

In fact, it’s when the film leaves behind the D&D/Pathfinder-style tabletop roleplaying world and switches to the history and strategy behind the story’s fictional card game, “Romance of the Nine Empires,” that things get really fun. Scenes depicting card-playing are inter-cut with scenes from the “world” of the card game, shown as a flat, barely defined world with static camera angles and characters that barely move (like a bad Star Trek episode), with not-quite-finished painted backgrounds. It’s a brave creative choice, and it really works. The actors playing these cardboard characters do a credible job exploring the weird, repetitive nature of the game, as it plays out differently each time. Samara Lerman in particular does standout work in what could have been a truly thankless role as Myriad, acting out the same scenes with minor tweaks each time, but her expressions and timing make it a treat to watch as the truth of her reality slowly dawns on her.

I was actually shocked that the made-up card game works so well here. It’s very much an homage to the Legend of the Five Rings card game (right down to player’s battle cries!), with a story element to the game tournaments that helps define each chapter of the overall story of the game’s world. To an old Magic: The Gathering player like me, seeing how this kind of game can actually have a story with some depth (unlike the various Magic comics, which never made a lick of sense to me), it’s kind of exciting. This is where Miller’s Natalie really shines: her character’s passionate dedication to the game, even as the fanbase shrinks every year and a less story-oriented, more strategic style of play threatens to remove the fun from it, made me wish the game was real.

Well, guess what? It turns out that the Kickstarter for this series was so successful that an actual Romance of the Nine Empires card game was published. The Amazon reviews are mixed, but I’m giving it a shot. Even if this movie had been a 2-1/2 hour commercial for an already-existing game, I’m in. It looks like a blast.

(Oh, and I have to give a shout-out to my pal Marc Semenchuk of the 501st Legion for his blink-and-you’ll-miss-it speaking role and his bad-ass, perfect, homemade Darth Vader armor. Well done, sir.)

On the not-quite-believable scale, I haven’t personally encountered the kind of blatantly misogynistic gamers, anti-CCG gamer snobs, or almost-all-white fanbase shown in the film. The first two I can forgive; all of the characters have an over-the-top, cartoonish quality, so if the characterization helps nail a joke or make a point, it’s all good. There’s plenty of immaturity and arrested development in every fan culture. The third is a bit more problematic: it’s bad enough that big-budget Hollywood films still feature casts that don’t reflect the diversity of the America I’ve lived in, and it would have been nice if the film had some non-white actors. The issue of race has rarely been handled well in modern fantasy works, but despite this there are plenty of non-white tabletop-RPG gamers out there. Maybe in Gamers 4? 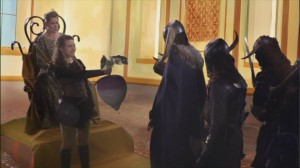 The DVD has a couple of additional bonus scenes, including a terrific rant about the cancellation of Joss Whedon’s Firefly and an exclusive short set in the card-game world that sets up a beautiful punch-line about the characters’ awareness of the “real world.” The disc also has an authoring problem: watching the Extended Edition with the additional branching scenes creates a short pause/hiccup every time the disc switches to or from the extra scenes, sometimes cutting off a word or two of dialogue. This happens a couple dozen times as it switched to and from the original cut, and it drove me bonkers. It also prevented the branching scenes from being viewed at all during regular playback in Windows Media Center; I had to manually hunt for the scenes in the tracklist. (I have no idea if the Blu-Ray has this problem.)

The closest comparison to the experience of watching the Gamers series that I can think of would be watching Kevin Smith’s early films. Clerks had a brilliant script, but terrible acting and direction; Mallrats was an unfocused mess on a bigger budget; and Chasing Amy had a great story with almost-believable characters and not-quite-natural acting. The Gamers has followed a similar (if much slower) creative path, and is on its way from beloved status among a faithful fanbase to genuine gaming-culture classic. (Hopefully they’ll skip the still-awkward equivalent of a Dogma/Jay and Silent Bob Strike Back and go straight to the relaxed and skillful character-based comedy of a Clerks II/Zack and Miri Make a Porno…)

Finally, I really dig the way this work was released. The film is under a Creative Commons license instead of copyright, putting the power of legal control in the creators’ hands instead of a publisher or studio’s. And it’s distributed by Paizo Publishing, the producers of the Pathfinder roleplaying game, which was their revision of the best edition of D&D yet (3.5 edition) under the Open Gaming License. I’m a big supporter of the open gaming movement and being able to improve and remix pre-existing work, so this hits the sweet spot for me.

The next two Gamers miniseries were funded on Kickstarter last year, and I can’t wait to see what this group of talented comedians does next.

The Gamers: Hands of Fate is the kind of solid genre comedy that I’d love to see more of. The subject matter and non-traditional method of distribution might limit its audience reach, but the passion behind it more than makes up for any inaccessibility. Viewers who’d dismiss this out of hand because they don’t consider themselves “gamers” (really, who doesn’t play games?) don’t know what they’re missing. Give it a watch: you might see yourself as even more of a game-lover than you’d thought.

The extended edition of Hands of Fate is on YouTube, in 16 parts. Here’s part 1 (note: has some NSFW language):

The DVD and Blu-Ray can be ordered here.

Previous:An Open Letter to Shailene Woodley
Next: STILL/MOVEMENT: About the New GOTHAM Trailer