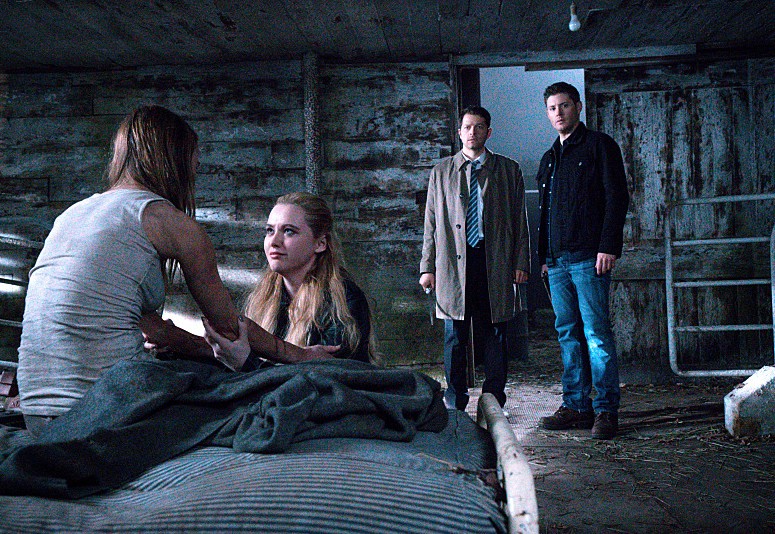 I know I gush over Robbie Thompson a lot, but anyone who has ever watched Supernatural can understand, this episode was just perfect. I want to weep at its beauty like Brendan Fraser in Bedazzled. Suffice to say, “Angel Heart” was aptly titled.

Firstly, we were able to see Jimmy Novak for the first time in years. I have to say, Misha has portrayed so many different versions of Castiel (as well as Jimmy), it’s really easy to see the distinction between all of them. That is a testament to his acting ability. Though I do miss Cas’s bedhead… a lot. It is important to note that it is now clear that Jimmy Novak is dead (and in Heaven where he deserves to be). The consent issue has been once and for all cleared up and the vessel is Castiel’s alone. Also, it’s nice that he and Amelia get to share Heavens; that’s what soulmates get to do. It’s also really nice that we get closure with the Novak family (in regard to Claire and Jimmy). Those two have been left to wander for years. I like their happy ending. And Dean was right, Jimmy was hero.

That brings us to the last surviving member, Claire. I have so many warm fuzzy feelings for this girl, it’s not funny. She is a little badass in so many ways. I also loved her interaction with each member of Team Free Will. Each of them was like a father to her (Team Free Dads?), and it was glorious. I think everyone’s favorite moment was “The Hot Topical” scene (I know for me that was up there), and that was perfect. Grumpy Cat is a perfect parallel for Cas (sometimes). Claire and Cas have had a very rocky relationship, but I think that they have now come to an understanding. She saved him, and asked Dean to look out for him. The hug alone could melt the coldest of hearts. I do love that she’s going to go live with Jody. Now I need a spinoff of Jody’s Wayward Home for Girls that she runs with Donna, where they fight crime and hands teenage boys. I’d so watch that. 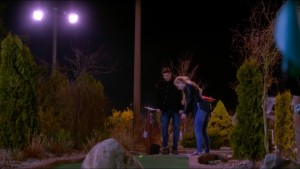 Then there is the “cool/lame dad” Dean, who gave her a gun for her birthday, then replaced it with Caddyshack (awesome movie) and a book “The Enochian Myth” (for understanding Cas more?). They went mini golfing, which was another amazing moment of the episode. Seriously, Robbie Thompson deserves all the love and hugs in the world for this episode. At first it was them not wanting to be near one another, which is understandable considering how things were left between them last time. It eventually ended with, what I believe, some true respect or at least some acceptance. She did apologize for trying to kill him, so that’s a step in the right direction at least. I can’t believe he let her keep the sword, though. 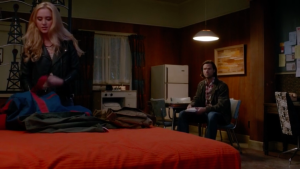 And then there is Sam, who was really more like an uncle than a dad, with teaching her how to scam credit cards and do all the stuff she shouldn’t be doing. Come on, Dean didn’t even give her a beer and Sam is teaching her identity theft? Yeah, who’s the one with the Mark again? Sam was also the mediator from beginning to end. I know we talk about how Sam should be the one with the family, but I see Dean doing that more within recent years. One thing though, Sam has been getting a lot of the heartfelt moments. The mention of Jess a few episodes ago, and now his mom. He’s right that (at least in regard to Supernatural) Death isn’t always goodbye. And since we’ve seen the reemergence of a few characters thought dead in recent seasons, I’d tend to agree.

Ultimately, this was such a good episode. I know Cas and Sam are really worried about Dean and the Mark, but I think he’s actually been handling quite well recently. Yes, he roughed up the guy at the bar, but come on! He assaulted Claire, so I think it was deserved. I have to say, despite the Gregorian storyline and surrounding kidnapping and violence, it was a very “domestic” episode. Are we sure that the writers aren’t just spending the day on Tumblr looking for ideas? I think this episode is definitive proof that Season 10 is the fanfic season.