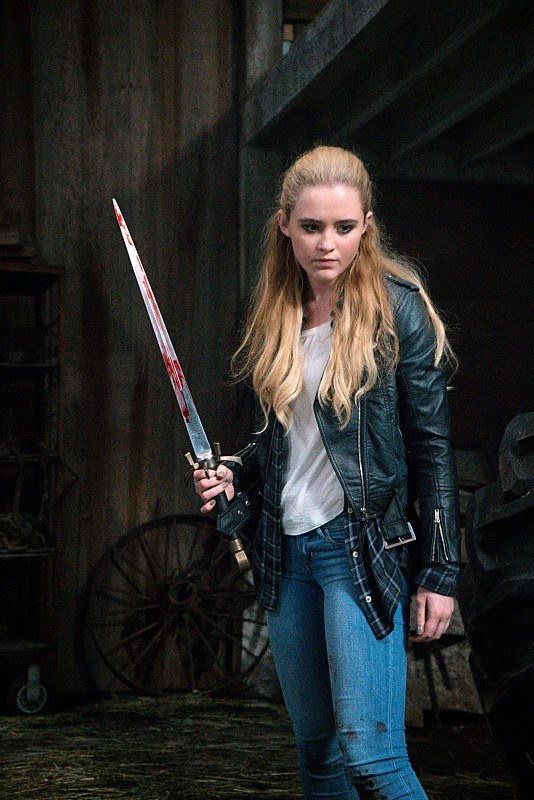 I asked my Twitter followers why Claire Novak was important to them and ultimately why she is important to Supernatural.  There was a huge positive response from people of all ages about what Claire meant to them and what she meant to Castiel, Dean, and Sam and Supernatural in general.  In the time since I’ve posed my question, I’ve seen other people on Twitter complain about Claire for being an annoying teenager and how “we” don’t care about teen angst.  Which, let’s be real, Supernatural is a big ol’ bag of angst during nearly every episode. The Winchesters or Castiel having the angst isn’t superior to Claire’s for lack of being an adult or a main character. And while we’re on the topic of teenagers, props to Misha Collins for sticking it to the Man, with his tweet prior to Angel Heart airing.

In this shocking vid @CW_network calls teenage girls “monsters!” talk about biting the hand that feeds u! https://t.co/yrQA9yePz4 1hr to go!

Collins is not wrong, not at all.  Recently showbuzzdaily.com put together an Audience Map for CW Primetime.  @xceteras on twitter put together a graph specifically for Supernatural viewership using the information provided.  The results are overwhelmingly teenaged girls between the ages of 15 and 20.  That is Supernatural’s biggest viewer base.  This is one of the many reasons why Claire Novak is important to Supernatural.  So yes, there is plenty of room for a little teen girl angst. 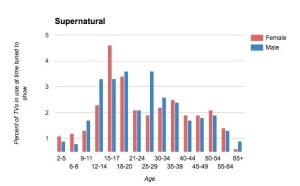 The fact that Claire is a teen girl on a TV show with such a large teen girl viewer base is also a common trend in the response I received from fans on Twitter.  They felt that she was an accurate representation of some of the things they have gone through, and how they deal with how life treats them.  Claire also gives them a character in their own age range to connect with.  I’ve witnessed the happiness of younger fans feeling included because of Claire being on the show.  This is as valuable for the fans as it is for The CW itself.

On the other side, I had seen complaints that Claire was cliché and represents the stereotypical foster child teen in the United States.  I had to bite my tongue at that.  I grew up with foster children. My parents have a heart for the teenagers especially. This is the age group that people do not want to take in and some of the people needing and deserving of the most love.  I didn’t always like it when I was younger, but I realize now what it means for these children to have a place to call home and for someone to love them and to care.  Seeing a representation of this on Supernatural was a little less stereotypical and sadly at times a reality. These are the children who fall in the cracks of the system.

Beyond the viewership and audience target, Claire Novak serves a very distinct purpose to Castiel’s storyline.  Throughout the seasons, he is often either on the peripheral helping the Winchesters directly or working away from them with issues of Heaven that still tend to have a direct impact on the brothers regardless.  Claire is part of Castiel’s story much more so than the Winchesters, though she does mean something to their story as well, which I will address later. 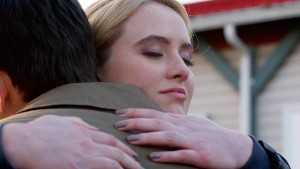 What happened to Claire and Amelia was one of Castiel’s first and biggest screw ups.  Cas was different back then.  He thought he was doing what was right as an Angel of the Lord.  What he did not realize until much later, was that his using Jimmy Novak as a vessel was also what destroyed the Novak family.  He did not foresee the consequences of his actions and probably, at the time would not have much cared either.  Claire was right when she had told Castiel that he had changed, he is, “Nicer now. And also kind of a doof.”  Claire Novak gives us more insight into Castiel as a person, who he is now and how much he has changed.  She makes him more relatable and more human. It was great that the show brought back someone from Castiel’s past. Claire is no longer a lose end in Castiel’s history.

Claire Novak is also important to the Wincester brothers’ story.  We don’t often get to see the repercussions of lives hurt directly or indirectly because of Sam and Dean.  Castiel locating Claire and asking for help from Sam and Dean, allowed them to face that.  It allowed us as viewers to see the other side.  Sure, they save a lot of people, and there is no argument that they are heroes, but there are casualties along the way.  Robbie Thompson did such an amazing job with Angel Heart.  We were able to see Claire bond a bit with Sam and Dean in such believable ways.

There was Sam as the big brother, teaching Claire how to hack her mom’s credit card statements and how to commit credit card fraud.  Sam knew how to talk to her. When Claire didn’t want to answer Castiel’s, “What were you doing in a bar?” Sam knew the better question to ask was, “What were you doing in an alleyway outside of a bar?” Sam has always been good at talking to younger people.  He remembers that it wasn’t so long ago that he was also full of rage toward his own father.

Then we have Dean. He served as another father figure of sorts for Claire.  He doesn’t think he knows how to talk to teens, but he does and he always has known.  He has much more in common with Claire than he does not.  They both grew up troubled and lost family members at young ages.  Both Dean and Claire had to grow up too fast and went through way too much. They were both nearly (possibly?) sexually assaulted, but were saved by their father (father-figure).  There’s also the anger on the outside with a big heart on the inside.  Castiel could see the similarities which was why he wanted so badly for Dean to speak with Claire. He felt that Dean could help her.  Dean’s scenes with Claire were some of my favorite during Angel Heart.  The mini-golf scene was adorable and so poignant. Claire now knows that her father was a hero and did not die in vain.  The world still exists in part because of Jimmy’s sacrifice.

Claire Novak’s personal journey was also important.  The first thing that Castiel ever said to Claire was, “I am not your father.” This was after she had called out, “Daddy!” to him, in a heartbreaking scene in the episode, The Rapture.  This is when Claire’s life changed so dramatically.  As she grew up without her father who was gone or dead as far as she knew, and her mother ran off to, “find herself,” she became understandably angry.  She fell into the wrong crowd because they were the ones who cared.  As Castiel had pointed out, she must not have had a lot of people in her life who really cared, to see Randy, the guy who made her steal for him, as family.

Then Castiel came back into her life and once again told her, “I am not your father.” How disappointing and heartbreaking that must have been for Claire again. But, she humored him, a bit.  She even came to like Castiel.  It was cute and said something about Claire that she had kept the Grumpy Cat plush that Castiel had bought her for her birthday at “the Hot Topical.” The hug was also sweet.  It may be awkward to see Castiel who looks exactly like her father, but at the same time, it means so much to her to have someone who cares.  This is why Castiel reaching out to Claire and not giving up on her is so important.  Claire has learned to forgive those who have hurt her and she grew in the process.  She’s incredibly strong.  No, she’s not just teenaged melodrama.  Robbie Thompson wrote her in a very believable way.

Lastly, I personally (among others) am hoping that Claire Novak is important to the continuation of Supernatural.  She now lives with Jody Mills and I’m sincerely hoping we see more of both along with Alex, Donna, and maybe even Krissy again.  Supernatural has done quite a bit this season to be less misogynistic and “women in the fridge.”  There is definitely an audience for people who would love to see a Jody Mills and Wayward Daughters spin-off.  Strong women characters are important and I hope we continue to see more of them, Claire Novak especially, in Supernatural. Not to mention Kathryn Newton, who plays Claire Novak has been so utterly delightful on Twitter. She fits in so well on the show, with the actors, and with the fans. Supernatural, you have something great with Claire Novak, I do hope you continue to keep bringing her back in the future.

38 thoughts on “Why Claire Novak is Important”