“CQB” is the best episode of The Expanse so far. I watched it a day early, then watched it again right after it was over–I can’t remember the last time I have done that with an episode of TV. There is just so much going on, but it is surprisingly cohesive, and I am invested in nearly everyone’s story. This show continues to impress me.

Let’s get the first piece of business out of the way: RIP Shed. I was so shocked and sad when he lost his head; I literally had to re-watch the scene about four or five times before I fully grasped what happened. That kind of scene changes the way a viewer experiences a show. I initially thought that blowing up the Canterbury in the pilot was going to be the most shocking element of the show, but boy was I wrong about that! There were two parts of the scene that I absolutely loved: the realistic effect of zero gravity with the subsequent gravity coming back, and the incredible acting done by the Knight crew. They looked as shocked as me, which is pretty impressive. Also, can we talk about Alex? Cas Anvar is killing it as the mysterious pilot, and I am proud to say that he seemed to have picked up the comic relief position left by Shed. And what the heck is up with Amos and Naomi? I guess we will need to wait even longer to find out more about their weird relationship.

Now that’s out of the way, so let’s talk about Ceres station. Havelock is alive! I am not sure how exactly he survived being impaled, but he did–barely. As one of our favorite Earthers, he is quickly seeing just how dire life in the Belt can be, and how Belters are not fond of outsiders. I hope Miller finds him soon! Speaking of Miller, the autopsy stuff was incredibly cool, and it was neat that we found out quickly that our dead body clearly has importance. Is he OPA? I am not sure. I am thinking that he probably has something to do with the ships that attacked the Cant and eventually the Donnager.

Which brings me to the Donnager. Last week’s episode seemed a little disjointed to me, but it all came together in “CQB.” We were able to find out a lot about Mars and how driven they are to be the hope and future of humanity. Captain Yao was amazing. She is the type of character that seems gruff, and you are unsure if you can trust her initially, but she ended up being awesome. And how cool was it that both of the soldiers in charge of the fail-safe were women? This show is doing an incredible job of showing a more hopeful, gender-equal future. Even though I enjoyed the battle sequences, I have to give a shout-out to Lopez, played by Greg Bryk. In last week’s episode with the stoic facial expressions and the pill-popping, he was super creepy, but after we got to know him this week, he is a new favorite (which probably means he will die soon). I liked that he gave Holden the benefit of the doubt and assisted rescuing the rest of the Knight crew. Let’s hope he survives a little longer.

I really have to give it to the effects crew this week. Those battle sequences were amazing, and the visual effect 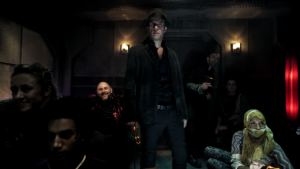 s on this show are stunning. It is very easy for science fiction, particularly shows set in space and/or the future, to get very heavy in their use of CGI and green screen that it almost becomes cartoonish. The effects crew on The Expanse, however, are masters of nuance, and all the future tech stuff seems very real and accessible.

Last, but not least, our Earth story. I have to admit that Chrisjen, although a great character, seems to lack some depth at this point. I am really hoping that she becomes a more important player in the series, but we are four episodes in and we still know very little about her other than she is concerned about who is setting up  Mars (which a great acknowledgement! I just want to see more). Also we were introduced to Fred Johnson (played oh-so-coolly by Chad L. Coleman) and his involvement in the OPA. He did more with his facial expressions in one scene than he got to do in two plus seasons of The Walking Dead. I am glad to see him again and I can’t wait to learn more about the OPA.

This episode was amazing, and probably the best hour of truly good science fiction that I have ever seen. The cast was perfect, the special effects were amazing (but not overdone), and the ending left my jaw on the floor (again).