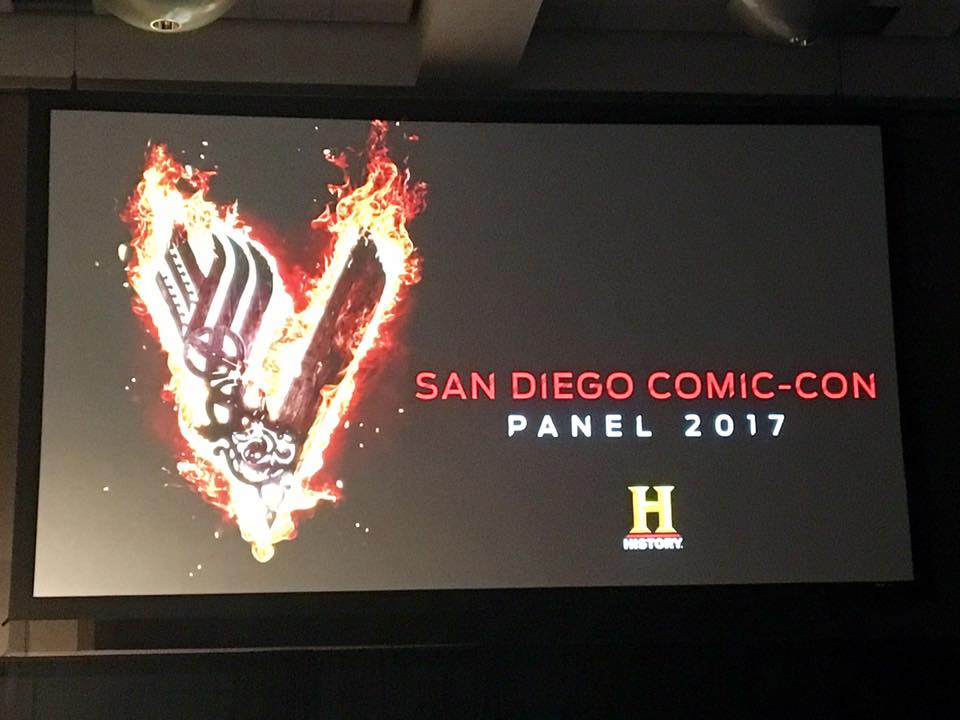 After several years of attending SDCC – and writing about the Vikings takeover in 2015 – this year I finally had the chance to experience their official panel…and not surprisingly, it was amazing.

This year, the Vikings takeover featured not just their infamous drinking horns (and of course the usual panel), but a Viking funeral as well. While attending the panel meant I didn’t have the best view of the longship burning, I don’t regret my decision at all. Panelists included producer and writer Michael Hurst, Katheryn Winnick (Lagertha), Gustaf Skarsgard (Floki), Alexander Ludwig (Bjorn), and Alex Hogh Andersen (Ivar)…but there was a special appearance late in the panel hour by none other than Ragnar himself, Travis Fimmel! 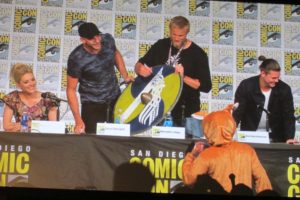 Now, as hilarious as it was to see someone in a kangaroo costume ask the panelists to sign a shield and then climb onstage to hug Lagertha, only to have the mask removed and turn out to be Travis, hearing Michael, Katheryn, Gustaf, Alexander, and Alex’s love letters to this show was what I really went for. While I had the great luck to interview Katheryn Winnick late last year, I will never tire of hearing her talk about portraying the amazing character that is Lagertha. When the moderator commented that Lagertha is a hands-on queen who “gets out there and gets dirty”, Katheryn’s response was absolutely perfect:

I think the difference with her, as being a queen…when Ragnar was king, he had a hard time with that power, and that control, and dealing with the responsibility. I think Lagertha understands her role and she’s really the people’s queen, and people’s ruler. She really wants to do right by her people and to be able to rule properly in a diplomatic way and rule from a part of her heart and strategy versus not accepting it. – Katheryn Winnick 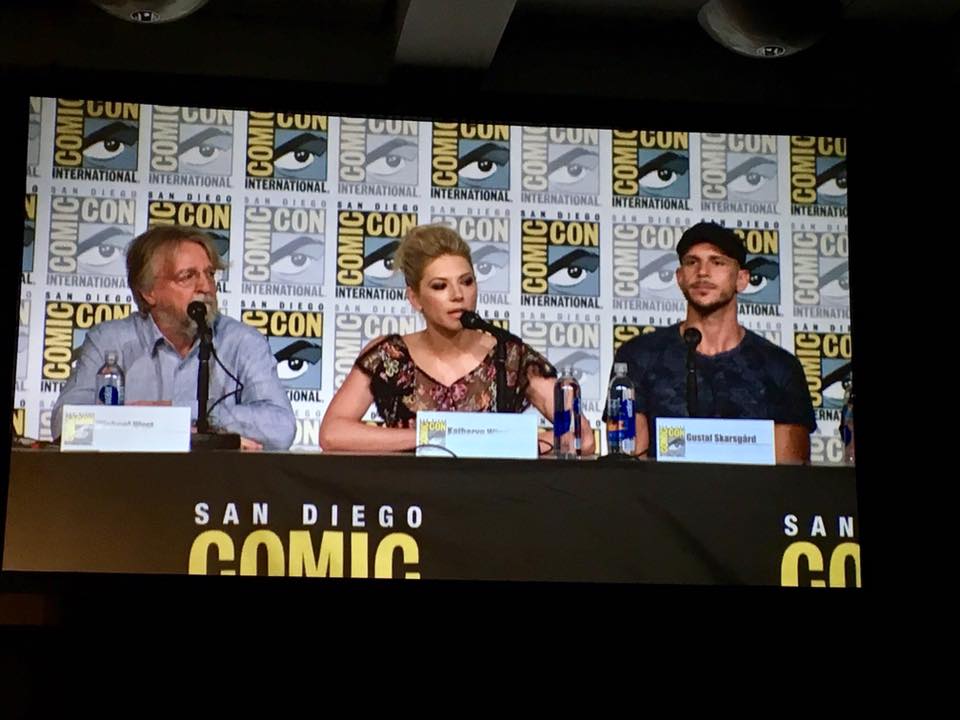 Of course, a big part of how Lagertha became the queen she is now is because of Ragnar’s death. When asked about his decision to write Ragnar out of the show, Michael Hurst was very clear that doing so was essentially meant to happen – that it wasn’t a problem, but an opportunity, and that he’s excited to move forward and see characters like Bjorn come into their own, as well.

It was very difficult to write the death of Ragnar, and a very passionate experience for me. Ragnar was huge part of my life as well as Travis’ and we tried very hard to make his death significant and extraordinary and astonishing…and the question of how you succeed that…is it a dead end? I always knew, when I started writing that it was about Ragnar and his sons. And it was always about family […] So, I was always confident that this show was big enough to carry the death of Ragnar and go forward. – Michael Hurst 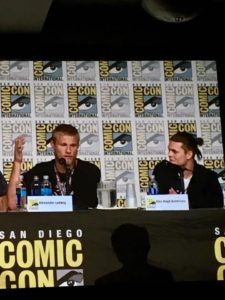 Speaking of Bjorn, one question that was posed to Alexander Ludwig was one I’m sure many fans have wondered – why did he go and sleep with his mother’s girlfriend?!

Basically the whole idea behind that is that the scene was normal. You can’t look at it from a way of how we all live our life, you know, what’s conventional…that’s not how they lived. You look at the show from our perspective, it seems brutal. But back then, Bjorn is becoming a man and he’s taking what he wants. And I liked him for that. That’s a good thing, you know? Nobody is perfect and I was really happy about showing some more ruthlessness and some more flaws. – Alexander Ludwig

And this writer has to admit that she loved that when Alexander finished his answer, Katheryn immediately said, “And I’m happy to share!” Now, that sharing clearly didn’t extend to Aslaug, but those were different people and different times – and thanks to Lagertha, Aslaug is now a thing of the past, as well. When asked about killing her former rival, Katheryn said,

You know? She had to go. There’s only one queen in Kattegat. I read that scene and I remember and being a bit conflicted with it as an actress because, first of all, Aslaug has come a long way but I think Lagertha has definitely ruled from the heart and she feels Kattegat isn’t represented in the right way. She feels it’s not ruled properly and it’s not how she originally saw her home that she loves and I feel that it was one of those things she had to reclaim. She needs to take back her home. She needs to do what’s right… [Aslaug was] an incredible woman and very powerful. It’s nice to be able to have where a strong woman approaches another strong woman and go head to head.

Personally I thought that Aslaug’s death – especially at Lagertha’s hands – was a long time coming, but I agree. They were both strong women, and it was great to see them go head to head – and it wasn’t over a man. It was over a kingdom. That, folx, is yet another reason why I love this show.

So Vikings lost a couple of characters last season, but they’ve gained a [soon to be] big one – Bishop Heahmund, played by Jonathan Rhys Meyers of Tudors fame. Michael Hurst spoke at length about this new character:

He’s a warrior, a great warrior, but he’s also a bishop. These warrior bishops did exist at the time and Heahmund is a real character, he died in battle. They were real bishops. Real men of God. They were very intelligent and very well-educated. They also felt that they needed to pick up the sword to defend the cross. These are complex people. These are monastery-forward people and I thought [Jonathan] was perfect to play someone who’s complex and not straight forward…[he’s] someone I knew and loved working with for many years, is a very charismatic actor, a very good actor, very powerful, a very intense actor, and commands the screen. And what we did need at the moment was a forceful Saxon warrior would could stand up to the vikings. Who could stand up intellectually with Ivor and also at war with Bjorn […] I was happy to invest in a new character that brought a lot of urgency, a lot of power…So [Jonathan] is an unpredictable character on the show, an unpredictable man in real life. I love him. I think when you see what happens in season five, you can agree that he’s a huge addition to the show…And he does come head to head with Ivor and that’s one hell of a collision.

It sounds as if, after being pushed off to the side for the better part of season four, religion (or rather the battle between religions) is going to become a major plot point of the show again. When asked about where Floki stands right now – having killed Athelstan to ‘save’ Ragnar but then having stopped the Viking raiders from destroying a mosque last season, Gustaf Skarsgard had quite a bit to say:

Floki, at this point, has done what he thought was right. He killed Athelstan to save his best friend and for that he was imprisoned and tortured and lost his child…he’s conflicted at this point. He is questioning his methods. He’s looking for new meaning somehow. And he comes [to the mosque in Spain] and he sees these people praying where there are no idols. Remember, this is a man who builds his own idols of his gods. They are physical incarnations of his gods. He comes to this room that’s spiritual, but there’s no physical manifestation, and he’s intrigued by that. And also the conviction that these people have in their praying. They don’t even get up, even though men with weapons are swarming the room…he feels a deeper connection to their conviction. Not their religion, because he doesn’t know anything about it. But there’s some fearlessness in their conviction. And he’s perplexed by that…Maybe he was on the wrong path and killing for the sake of killing. He’s questioning everything. At the end of the season he’s lost completely. So he immerses himself [in] the oceans and the will of the gods. It’s a very personal and spiritual crisis and journey.

While Alex Hogh Andersen didn’t have the chance to talk in depth about his character during the panel, I can’t say that I’m upset about that. He was clearly excited to be at Comic-Con, and had great stories about his audition – which he apparently messed up, at first! – and how he spent quite a bit of time researching Ivar as a historical figure/figure of legend as well as Ivar’s specific disability (“brittle bone disease” being the best explanation of that). The reason I’m not too sad about not hearing him speak more? Well, he was adorable and charming but I also don’t want to be spoiled too much in regards to Ivar’s future or even future actions. 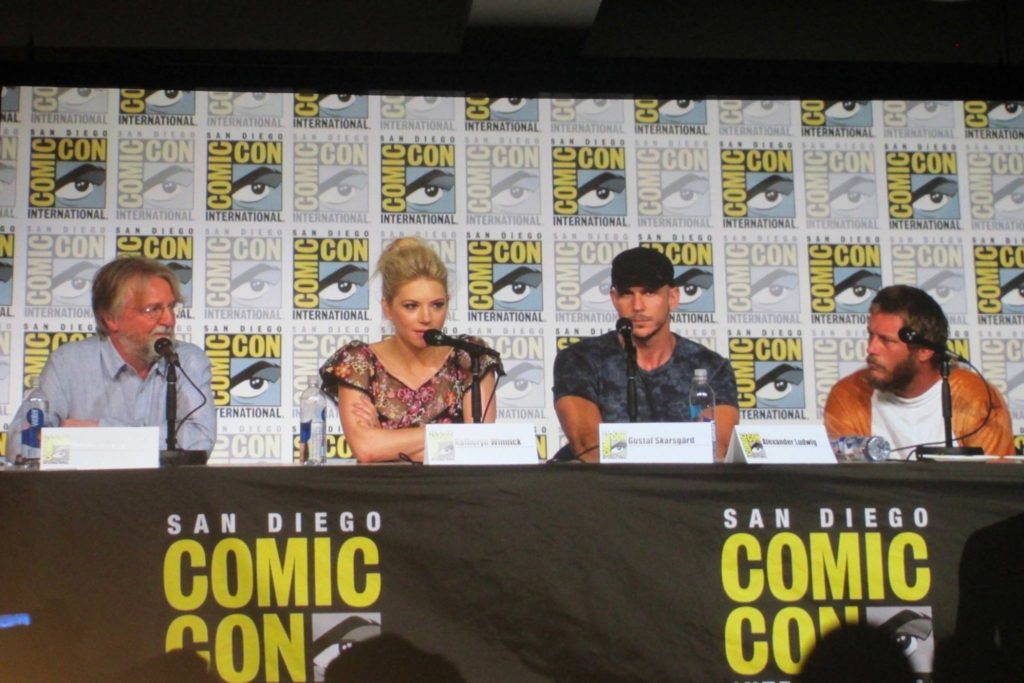 I can’t wait for Vikings season 5, but I certainly hope for a sixth season, as well. So when Katheryn Winnick asked Michael Hurst if there would be a season 6, and he replied, “I have no definitive news but I certainly hope so as I’m writing the episodes,” I cheered at the top of my lungs (along with just about everyone else in the room).

Did you enjoy the SDCC 2017 Vikings takeover? Did you experience the panel, pick up a drinking horn, and/or get to see the Viking funeral? Let us know in the comments! 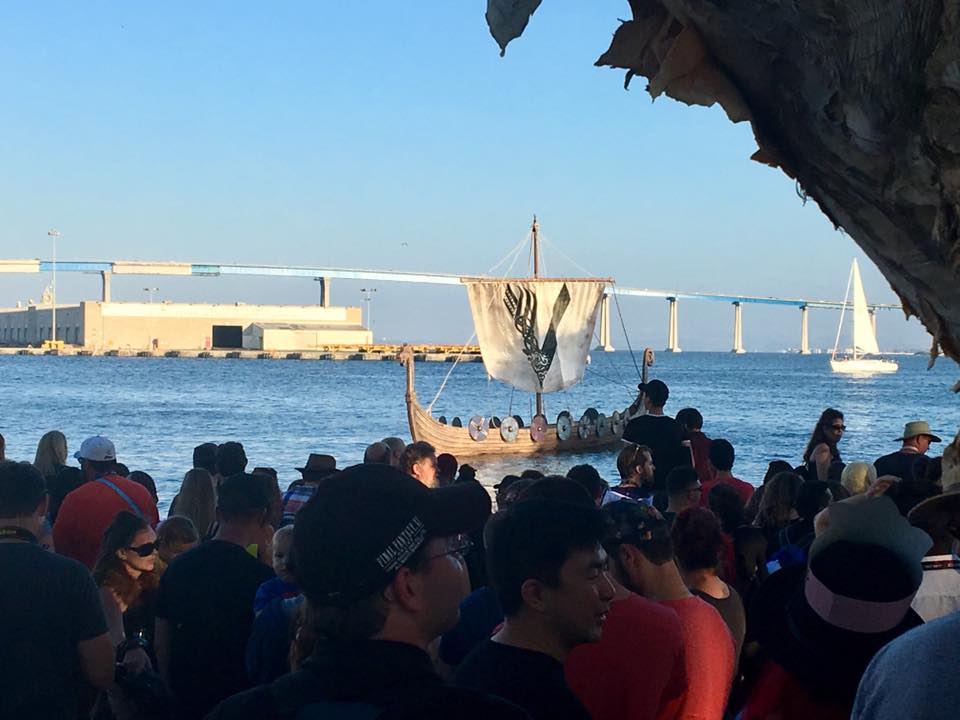