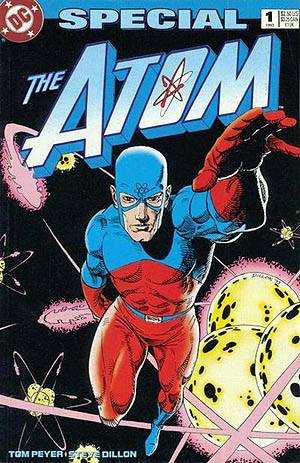 The highly successful TV show Arrow has added another DC based superhero in the ever growing casting list for season three. Brandon Routh has been cast as the Atom, a hero DC comic books fans would be well familiar with.

Personally I’m excited about the news because I’m a fan of Brandon Routh, who played the iconic Superman in “Superman Returns”. Though the film didn’t do well, it’s good to know that he’s going to play another DC superhero. For those of you who aren’t familiar with the character, The Atom, or Raymond ‘Ray’ Parker, has the power to alter his size at will. Not impressive enough? Well, he can shrink himself to a subatomic level, which means that he can alter atoms if he desires. Not only that, he has full control of his mass, meaning he can lighten his weight to fly or increase it to punch through walls. Still not impressed? What if I told you he was able to shrink himself down and alter Superman’s atoms from inside to create kryptonite? I’m sure that must’ve caught your attention! Brandon Routh might not be playing the powerful hero anymore, but his new character is still quite deadly.

According to the report, his character will play an unexpected role in Oliver’s life, as well as Felicity’s. I’m sensing some drama between those three, and some guaranteed reactions from Olicity (Oliver and Felicity) shippers when the new season debuts. The new character will be the new owner of Queen Consolidated who has some mysterious intentions regarding the Applied Sciences division. After introducing The Flash, I’m excited to see more ‘super powered’ character’s in the Arrow universe. For some of you, the new character would sound familiar to Marvel’s Hank Pym /Ant-Man. If Arrow does decide to show Atom’s powers it would probably end up being compared to Hank’s power in his feature film, so a DC vs Marvel battle does seem likely.

Brandon Routh’s the Atom will be joining another new addition to the cast, a female character by the name Katana, played by Devon Aoki. She’s an excellent samurai, and has a sword named Soultaker that’s able to capture the souls of the people it kills and allows her to communicate with them. Don’t know if the show will include her ‘soul capturing’ power. Her husband will also be a part of the new season. She’s a very interesting Asian female character and I’m looking forward to seeing how the show handles her.

What are your thoughts about the new characters appearing in Arrow Season 3? Excited to see more familiar DC characters in the show? Let us know in the comments section!