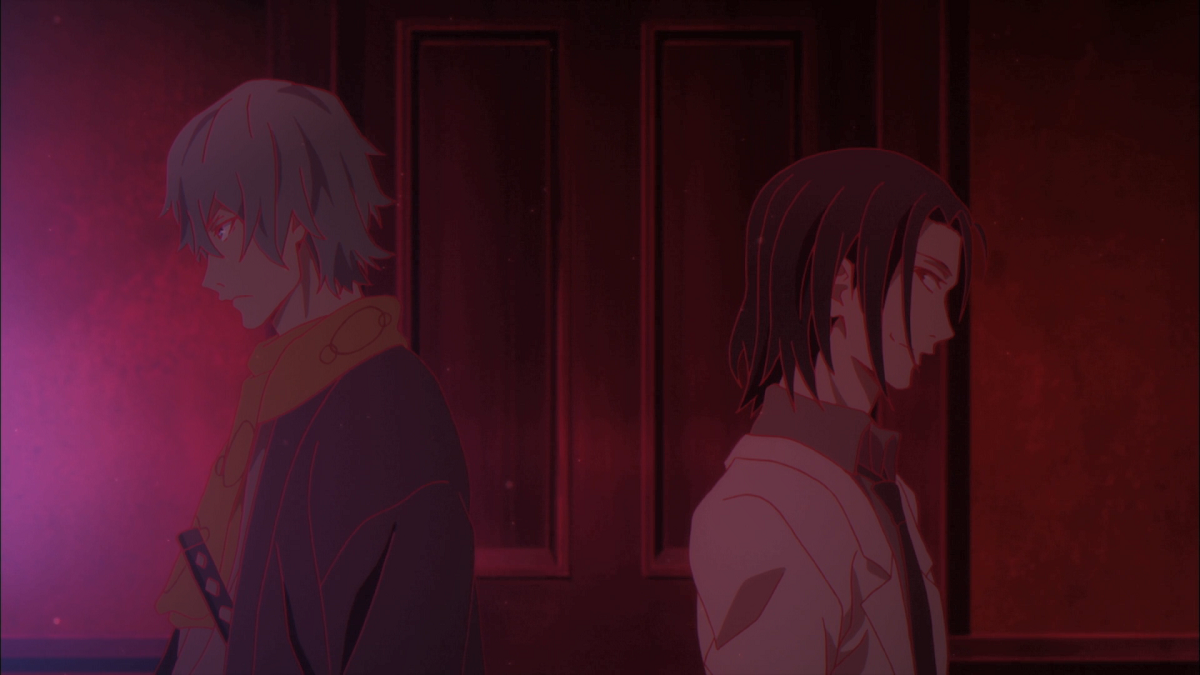 As much as I’m enjoying the overall arc of this season, and as great as Fyodor is as a villain, the plot of “Cannibalism Part 3” seemed a little lazy and meandering just to give our characters some obstacles to overcome.

The first half of “Cannibalism Part 3” was amazing. The flashback with Mori and Fukuzawa was visually stunning, animated in a completely different color scheme and style than previous flashbacks, and it was very interesting to see how they first met and become…friends? Allies? Reluctant conspirators? It was great to see them working together, and then learning that they both had the same benefactor, whose plan involved the Detective Agency, the Port Mafia, and the government working together to keep the city safe. It makes their current duel even more tragic, because they clearly respect each other and acknowledge that their agencies work in tandem, but now it’s about survival. 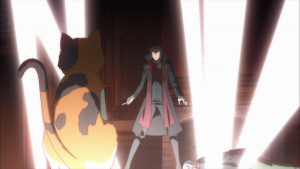 By the way, their mysterious benefactor? Natsume, whose ability is “I Am a Cat“, and he is, in fact, a cat. And he’s not just any cat – he’s Haruno’s cat, who was mentioned as vanishing in last week’s episode. I love that apparently the most powerful ability in the series is a dude who turns into a cat.

Where “Cannibalism Part 3” really started to falter was once Dazai, Kunikida, Atsushi, and Akutagawa made it to Fyodor’s hideout and launched their infiltration operation. There are a couple of moments that are inconsistent with other moments during this episode, which makes it look like they were trying to downplay abilities they previously showed were pretty amazing just to give the characters obstacles. The most glaring example is Atsushi. Kunikida is amazed to see Atsushi use super speed to bypass all of the guards and the sensors – which is indicative of the growth Atsushi has done and how comfortable he is with his ability now. However, later, he and Akutagawa are stymied when they reach a sensor with no way past it, and then when they finally discover Pushkin – basically an overweight Russian man – he outruns him. As demonstrated not ten minutes previously, Atsushi is perfectly capable of catching up to him, so why didn’t he use that? 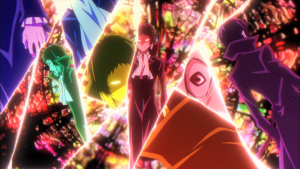 Akutagawa as well is given nonsensical issues just to up the stakes. Last week we saw him stop Kyouka’s knife with his bare hand, and he’s used Rashoumon as armor before, but this time he can’t stop from being grazed by a bullet? I suspect this was just to infect him with the virus ability as well and increase the tension, but it doesn’t make any sense.

Anyway, I’m trying not to focus on things like that because it will just drive me crazy. I do love Atsushi and Akutagawa working together – their conversation on the drive up where it was clear that Akutagawa wasn’t listening was great – and I know there is a lot of baggage to unpack with the two of them. I am enjoying their interactions, and how Atsushi keeps putting his foot in his mouth. I hope that soon we get a little more background on Akutagawa.

All in all, a perfectly fine episode. As usual, the animation, music, and voice acting are superb. I just could do without the plot contrivances.