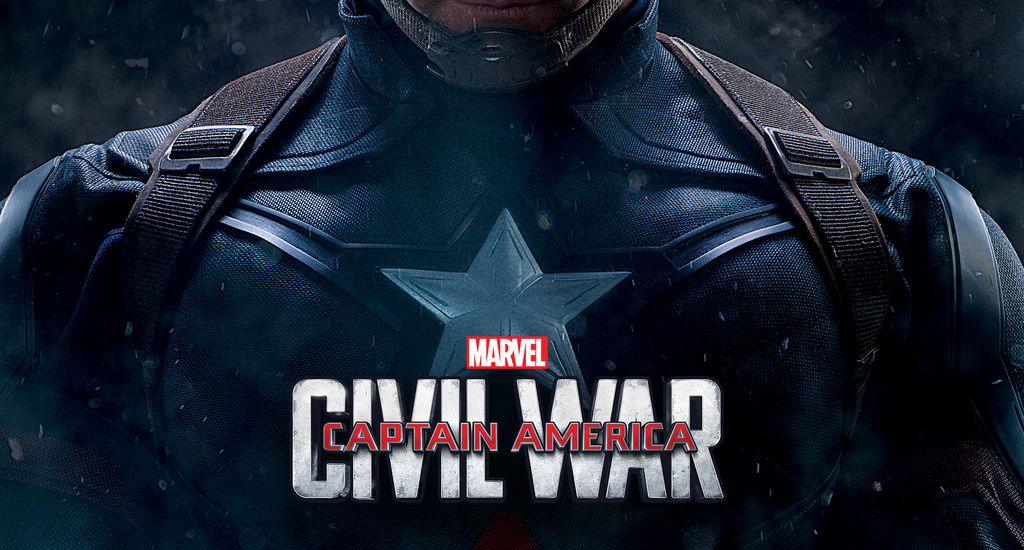 WARNING: this review contains spoilers for Captain America Civil War and other MCU films that preceded it.

It’s difficult to talk about Captain America: Civil War without discussing shipping.  It’s almost like they intentionally catered to the shipping crowd here, and I’m not even upset about that.  The fandom has a butt load of new material to work with now, and I couldn’t be happier.  But for those of you who aren’t here for shipping (yes, I know you exist) just skip down a few paragraphs and I’ll let you know the coast is clear. 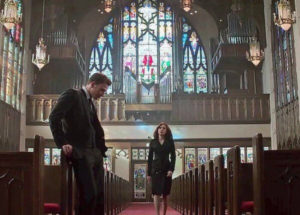 First let me say yes, I am shipping trash.  For a brief period I was on Team Stony, then I fell completely for Stucky around the time things started to build up for Winter Soldier.  I’ve been Stucky trash ever since.  But through all this slash shipping, the romance between Steve and Peggy was still something incredibly beautiful and I could never take a side against it.  All my head canons include Steve’s love for her.  Needless to say, her funeral pretty much ripped my heart from my chest and stomped all over it.  That scene pushed me to the brink of tears more than any other moment in the entire film.  It was a complete gut punch and came at the worst possible time for Steve, who’s dealing with his boyfriend problems and that whole civil war thing.  Poor dude has had a shit week, okay.  Dude did not need more crap piled on his plate at that moment, but that’s just how things played out.

The only Steve romance in Captain America: Civil War that kind of threw me off in the film was the one with Sharon Carter.  I’m not raging against it, but the kiss seemed entirely unnecessary and out of left field.  The only thing about that scene that I enjoyed was Sam and Bucky’s reactions to the kiss, but the rest felt really forced.  I can’t tell if it’s a lack of chemistry between the actors, the fact that Sharon is related to Peggy, or the fact that my feelings about all these other ships are so god damn powerful that their romance seems tiny in comparison.  But hey, that moment was brief so let’s just roll past that for now and revisit their possible romance if and when it comes up later in the MCU.

The major conflict of the film is that Bucky is dramatically brought back into Steve’s life under horrible circumstances.  He’s known Bucky was still alive since Winter Soldier, but he’s sort of vanished into the background allowing Steve to return to his “normal” life (as normal as a superhero’s life can get, anyway).  It really goes to show just how much Bucky means to him that Steve would enter into a civil war against his closest friends to keep him safe.  And really, how could we not watch this film with shipping goggles on with a premise like that? In the comics it’s basically about personal liberty for superheroes and the ability to protect their private lives.  That’s what started the civil war there. This? All Bucky all the time.  What are you doing to us, Disney?!?

But the Steve and Tony romance was strong in Captain America: Civil War as well, albeit in a much more tragic manner.  This was basically their break up film.  Not only did Steve’s old flame Bucky return, but it turns out Bucky was responsible for Tony’s parent’s deaths, too.  That’s going to cause some complications no matter how you look at it.  Even if Bucky hadn’t been framed for the bombing, that revelation alone would have pushed Tony over the edge.  The film culminates in a massive amount of physical violence between the trio, where Steve and Bucky fight as one force together against Tony.  That certainly plucked at my shipper heart strings.

Surprisingly, Steve lived.  STEVE LIVED!  Hot tip: that didn’t happen in the comics.  He dies as a result of the civil war.  But he did leave the Avengers with Bucky and sent Tony a heart shattering break up letter that basically says “we are never ever ever getting back together, but if shit goes down give me a call.”  Fandom is going to produce some amazing art and fanfic out of this.  I can feel it.  Bring it, fandom.  I’m eagerly waiting for it.

Okay non-shipping friends.  It’s safe to come back to the Captain America Civil War review now.  And wow, there is a lot to talk about.

First and foremost, let’s talk Spider-man.  This was probably the most disappointing part of Captain America: Civil War for me.  I understand Peter Parker is an awkward nerdy teenager, but his previous incarnations haven’t felt quite so grating on my nerves as this one did.  His introductory scene with Stark seemed really promising but as soon as we actually saw him do battle he felt out of place.  His quips got a lot of laughs from the audience, but the humor just didn’t seem to mesh with the already established tone of the MCU.  I can’t even put my finger on why that is other than the fact that he’s very young and inexperienced.  Wanda is young, too, but she’s seen a lot of stuff in her short life and doesn’t come off quite so naive.  I’m really bummed that something so many of us had been looking forward to didn’t quite hit the marks we were hoping for.  It wasn’t awful, but it wasn’t great either.

While many people felt the film was too packed, I actually enjoyed all the new character dynamics and interactions that we got to see (Spider-man notwithstanding).  While I haven’t been the biggest fan of Ant-Man, his unique brand of humor actually did mesh with the other characters nicely.  It was a much needed comic relief.  Seeing Sam and Rhodey play off each other was also quite enjoyable and also helped with the diversity of the cast.  When they are separate it can feel like having a token POC character to prop up the white male lead at times, but having them there together made it feel much more organic and less like an effort to up the diversity quotient of the superheroes.  I love these two characters for who they are as individuals, but being the solitary POC in the core cast of a film can feel a bit awkward.  The undeniable chemistry and angst between Vision and Wanda was also a highlight and I can tell that’s going to be a relationship I enjoy seeing develop in future films.  And speaking of Wanda… 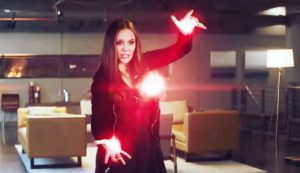 I gushed over how great Scarlet Witch was in my Avengers: Age of Ultron review, so it shouldn’t come as a surprise that I’m over the moon about her here, too.  She’s training to become an Avenger and one mistake tipped the scales against them in the public eye. It basically pushed the Sokovia Accords into action, which was the root cause of the civil war.  She has a lot of guilt about it, but she still sides with Steve to protect Bucky and keep the Avengers free of government control.

It’s also interesting to note just how powerful she is.  She’s the only one that can go toe to toe with Vision, and many people are naturally scared of her because of her powers.  Bonus: her addition to the Avengers means that Black Widow is no longer the token female on the team.  We’ve finally got some genuine gender diversity happening and that’s fabulous.  More women please.  And more POC characters.  And can we throw in a canonical LGBTQ+ character too maybe?  I mean technically we have Loki, but that aspect of him hasn’t been mentioned in MCU.  But I’m getting a bit off track here.  The point is, Wanda is amazing and my sincerest thank you for whoever decided to add her to the MCU.

One of the strongest themes in Captain America: Civil War was how blurred the line between hero and villain is sometimes.  Black Panther is one of the biggest examples of this, and his character arc in the film highlights this theme in a really blatant way.  He can be seen as a villain at first to some because he’s siding against the protagonist of the film, but he’s being driven by the desire to avenge his father’s death.  Tony has similar motivation and even though I’m #TeamCap, I still feel for Tony.  Even Helmut Zemo, who is basically responsible for turning the Avengers against each other, is motivated by his loss.  He’s absolutely an antagonist, but he’s not a maniacal mustache-twirling villain.  He’s just really damn upset over his entire family being killed. Then we get to Bucky, who is an antagonist in Winter Soldier (against his will, but still), but very much on the side of the film protagonist this time around.  The same can be said of Wanda, who was being used as a tool against the Avengers and is now joining them to utilize her power in a positive way. 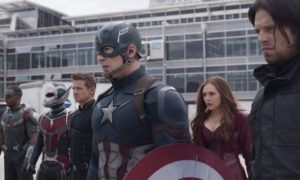 Even online feelings about which side is “right” seem to be mixed.  I’m definitely on Team Cap, but I have quite a few friends that are on Team Iron Man, so to them Captain America and Bucky may be viewed as the primary antagonists of the film.  It’s all up for interpretation and can’t be easily pegged down.   I think that’s a sign of brilliant writing.  It’s incredibly nuanced.

So far Captain America: Civil War is my second favorite MCU to date, beating out Winter Soldier and the original Avengers film by a mile. Guardians of the Galaxy is still my favorite, though, and it’s going to take a hell of a lot to nudge that out of my top spot.  Perhaps that rumored Black Widow film will do it.  Or maybe Guardian’s of the Galaxy Volume 2.  But second place isn’t all that bad considering there are 13 completed MCU films to date with another 9 set to be released in the next three years.  There was very little to be unhappy with here, and I hope the stellar script quality from Captain America: Civil War carries over for the rest of Phase Three.