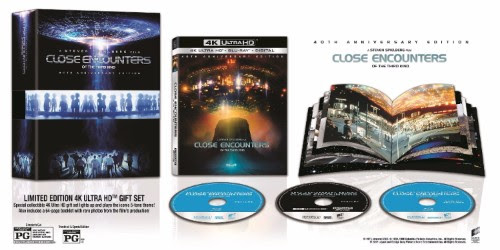 Sony Pictures Home Entertainment will be celebrating the 40th anniversary of the sci-fi classic Close Encounters of the Third Kind by releasing the digital remastered 4K version of the film on September 19, 2017.

Fans can get the re-release on a 2-Disc Remastered Blu-ray, 3-Disc 4K Ultra HD or a Limited Edition 3-Disc 4K Ultra HD ‘Light and Sound’ Gift Set! Both Blu-ray and 4K Ultra HD release include three versions of Close Encounters of the Third Kind along with all-new bonus content that features new interviews with Steven Spielberg, J.J. Abrams, and Denis Villeneuve.

The film will also have a one-week theatrical re-release on September 1, 2017. The upcoming Limited Edition Gift Set has illuminated packaging that also plays the iconic 5-tone motif. There’s also an expanded booklet that has rare archival photos.

The three versions of the film include the 1977 theatrical version, the 1980 Special Edition release, and the 1997 Director’s Cut.

The 4K restoration is sure to be a treat for fans. Close Encounters of the Third Kind has been fully restored from the 35mm original camera negative, thereby utilizing in 4K the full resolution, detail and color depth inherent in the film. 4K Ultra HD is able to bring the full power of this restoration to homes, featuring four times the resolution of high definition, high dynamic range (HDR)–which produces brilliant highlights, vibrant colors and greater contrast on compatible displays.

Written and Directed by Steven Spielberg, Close Encounters of the Third Kind was produced by Julia Phillips and Michael Phillips.

The Bonus Features Include: