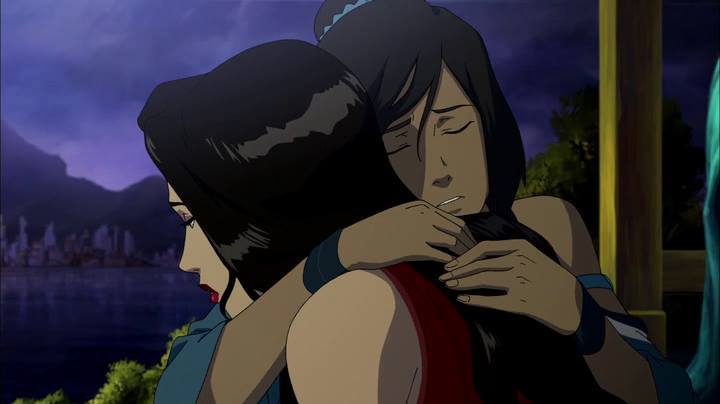 If you read my The Legend of Korra Book 4: Balance finale review you would know that I greatly enjoyed it. Not only did the book show Korra’s amazing character development since Book 1, it also gave the whole world something to be happy about: a pair of bisexual POC female characters. The Legend of Korra has made a mark in the history of LGBTQ+ representation. So, let’s talk about it!

Ever since watching Book 4, I couldn’t help but notice a lot of queer- or shipping-worthy moments between Korra and Asami. I’ve been a fan of the two girls since Book 3: Change which showed them forgetting about the boy they liked, Mako, and actually becoming very good friends. That’s what I call character development. I’m tired of seeing females being hateful towards each other because they want to get the same guy. The creators of Korra stopped with the dull trope and allowed Korra and Asami to become closer and move on from Mako.

I ship a lot of characters; it’s something that’s very tough to do if you are part of any fandom. Even though I saw Korra and Asami growing close together I thought it was just me seeing them through my shipper goggles. What I wasn’t expecting was the creators making them canon. I mean, famous TV shows hesitate from lead queer pairings so I wasn’t expecting to The Legend of Korra taking another route especially since it’s a cartoon show for kids. 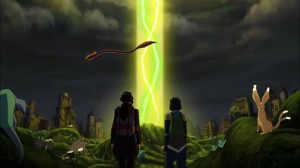 But then the final moments of the series happened and I couldn’t help but smile. My heart was pounding and I wanted to do a little dance. An animated show was actually going there! I praised the Heavens when Korra and Asami decided to go on a vacation together and the show ended with them holding hands and looking romantically at each other, a scene that paralleled Varrick’s and Zhu Li’s wedding scene.

I took to social media to express my happiness. I was expecting everyone to be happy about such a development. The episode most clearly showed the two females in love. But then my fun dwindled when a number of people started to talk about the gay agenda, and that Korrasami shippers were crazy, that the two girls weren’t in love, that it was emphasizing the stereotype of strong women being lesbians. I still can’t believe that people will actually come up with weird reasons just to ignore that a queer pairing did happen.

And then Bryan Konietzko took to his personal Tumblr account to officially declare Korrasami as a canon bisexual pairing, and it was wonderful. I loved how Bryan talked about dealing with the pairing as gently as possible. Korrasami is a pairing that shippers dream of. The two started out as friends, even romantic rivals, and then started to have romantic feelings for each other, regardless of their gender. No one should ignore a possible romantic pairing just because it’s queer, and at the same time, no one should ignore it even if it’s straight. Everyone should understand what it means to love someone. And as far as I’m concerned, love transcends a basic thing like gender.

I would like to congratulate Bryan and the team. They have done an undeniable service to millions of viewers around the world. Queer people, no matter where they fall on the sexuality spectrum, can’t deny how beautiful it was to see such a pairing. Korrasami is an inspiration to everyone and it will definitely live on.

Personally, the best thing about the pairing is that the two characters weren’t labeled as ‘straight’ or ‘bisexual’ from the beginning. Due to the kind of society we belong in, some of us immediately labeled the girls as straight just because they both fell for Mako. Why would we think that? It’s because of the idea that media presents to us. If a boy and a girl are in a story, the two will inevitably end up together. I love it when shows surprise its fans when it comes to the sexuality of characters. That’s what Hit the Floor did with Jude and Zero. Their pairing just happened and it was awesome. The same holds true for Korrasami.

If you are one of those people who think the show sent a message to young fans that if you can’t get your boy, you are better off being with a girl, then I have nothing to say to you. You have completely missed the important message of love and understanding The Legend of Korra helped convey. 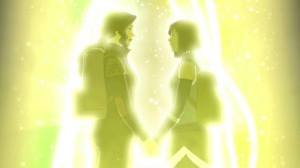 If you are a Makorra fan then yes, I understand your frustration. It’s something that a lot of queer pairing shippers experience from almost every TV show. I would like for you to understand and look at the bigger picture here. By giving fans a bisexual female pairing, the show has made a huge impact, more than a pairing like Makorra could’ve made. It has given viewers, young and old, something to look up to and associate with. Don’t you believe that’s what’s important in the kind of world we live in? I urge you to join Korrasami fans in their happiness, if you haven’t already.

Korrasami has given me and millions of others hope for a better future regarding queer representation in media. TheBacklot considered ‘queerbaiting’ a trend in 2014 and I felt hurt by that. Why do TV shows continue do such a thing? Just so they can attract queer viewers? Being a queer viewer and/or a queer pairing shipper is more or less considered a joke, someone who can be exploited to create a buzz for a show by TPTB (The Powers That Be).

You have full control regarding the shows you want to watch. It’s all up to you. But I would like for you to understand that there are tons of shows out there that actually do something for queer representation in media. So, why not support them? Queer representative shows need all the fandom support they can get right now, especially In The Flesh. So, why not help out such shows rather than expend energy on the ones where a queer pairing is nothing more than something to be made fun of?

The Legend of Korra has proved that a queer pairing involving two lead characters can definitely happen! And now I lie in wait for another lame excuse TPTB comes up with the next time a queer pairing is mentioned in front of them, while they keep on teasing vulnerable fans to rack up viewership.

Did you watch The Legend of Korra finale? Are you a fan of Korrasami? Why do you think other TV shows haven’t done this before? Will they do it now? Will fandoms become more vocal? Let us know!

3 thoughts on “Co-Creator of The Legend of Korra declares Korrasami official! Let’s talk!”