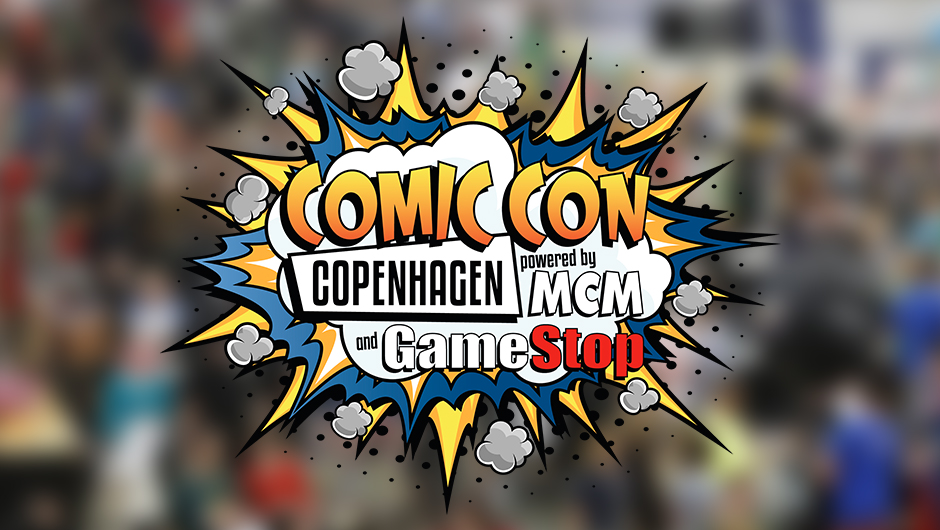 Last weekend, I flew to Denmark to attend the first Comic Con Copenhagen. The convention being in partnership with GameStop, it was the place to be to try out new games as well as attend panels with guests from Fear the Walking Dead, Arrow, Bitten, Game of Thrones… 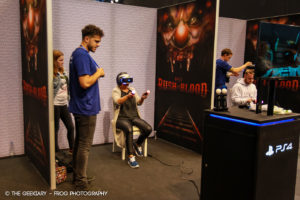 Comic Con Copenhagen was basically heaven for gamers. I would say one third of the exhibition floor was reserved for booths from companies like Ubisoft, Playstation, and Nintendo with plenty of opportunities to discover and test new games as well as live e-sport contests. I had the chance to try out Batman: Arkham VR for Playstation 4. I already had a taste of Virtual Reality at Star Wars Celebration Europe in July so I was really looking forward to this new Batman experience. Unlike the Trials on Tatooine, Batman: Arkham VR is static. There is no walking required, everything is done with the controllers. However, that does not mean you don’t feel involved. During the test, I chatted with Alfred, put on the Batman suit and did some target practice. The headset, headphones and the two controllers really make you feel part of the universe. At one point, when I/Batman was going down to the huge Batcave, my fear of heights kicked in and I almost removed the headset because I was starting to get dizzy. In the end, I spent the whole ride 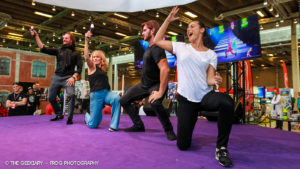 down looking at my Batfeet! Some of my more game-inclined friends also spent some time playing FIFA17, Gears of War 4, Hitman, Dead Rising and Just Dance 2017. The Just Dance 2017 platform was very entertaining. Seeing people in Joker, Disney princess or Spiderman costumes dancing to catchy songs is a sight to behold. On Sunday afternoon, Greg Bryk, Greyston Holt, Emily Swallow and Elysia Rotaru had a Celebrity Dance-off. I have to admit, this was hilarious. I am not a dancer but this game seems like a lot of fun, coupled with a tough workout. 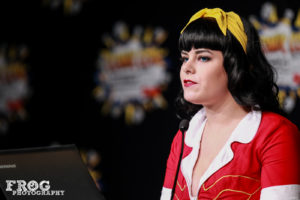 For two days, many panels were held on two stages: Ubisoft hosted a panel for Watch Dogs 2, there was a Tekken 7 Tournament, a Casting & Molding 101 workshop as well as several cosplay competitions. While I did not get to see them all, it was good to see a diverse choice in panels. The first panel of Comic Con Copenhagen on Saturday was called “Cosplay is Not Consent”. Awareness on this topic has been slowly growing at conventions and con organizers are starting to seriously tackle the problem. I was really happy to see a panel about it. Cosplayer Chikara did a presentation on what consent means, what happens to cosplayers in real life and online, how cosplayers and non-cosplayers can handle the issue. Some of the stories she told us were downright scary and entirely illegal in most countries. With the growth of conventions around the world, cosplayers are more and more at risk of harassment, so it is nice to see a panel breaking the taboo and discussing it clearly. 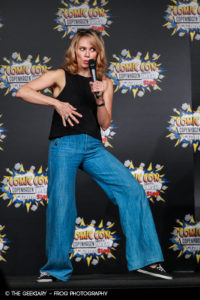 During the weekend, several special guests were there for photoshoots, autographs and panels: Greg Bryk & Greyston Holt (Bitten), Alycia Debnam-Carey (Fear the Walking Dead, The 100) Cristina Rosato (Assassin’s Creed video game), Elysia Rotaru (Arrow), Kerry Ingram (Game of Thrones) and Emily Swallow (Supernatural). Like many attendees, Debnam-Carey was the guest I was most familiar with but after attending the panels of the other guests, I will definitely check out some of their work. Emily Swallow recreating her motion-capture moves and talking about “glowing balls” on her suit was one of my favorite moments.

On top of interviewing Game of Thrones’ Kerry Ingram, I briefly attended her panel on Sunday. It was nice to hear that she hates Melisandre as much as I do, although her reasons are definitely more valid! She revealed that to avoid leaks of Shireen Baratheon’s death, they gave the scene the code-name: “KFC” [Kentucky Fried Chicken]. No one can say the Game of Thrones writers don’t have humor!

The main guest attraction of the Comic Con Copenhagen was of course Alycia Debnam-Carey as it was her first convention ever outside of SDCC. Her role as Commander Lexa in The 100 brought a dedicated and passionate fanbase even more though after Lexa’s fate in Season 3. While the organizers knew her to be very popular, it is clear that they did not expect that many fans. Saturday was a bit crazy. Many people did not get a photoshoot or autograph vouchers because other fans bought 5 to 10 tickets at a time. However on Sunday, to be fair, the staff enforced the rule one person = one voucher in order to give everyone a chance to 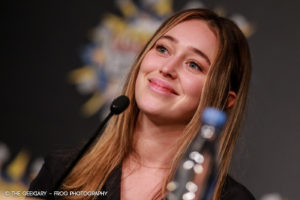 meet Debnam-Carey. For her panels, the Saturday line ended being quite chaotic with one fan fainting but on Sunday, the volunteers had been briefed on how to handle the panel line and everything went smoothly. I have to say, in all the conventions I have been to, I have never seen an actor being such a big hit. She was a trooper. Having to interact with fans non-stop for 9 hours a day, two days in a row is rough.

During her panels, she showed that she clearly is an intelligent young woman with an excellent grasp on her characters and where she is at in her career. Most of her panels are easily found online but she made some comments that I thought were worth sharing. Lexa was obviously a much discussed topic as it was the first time fans had the chance to ask her questions. It was very interesting to have her more direct point-of-view regarding her role on The 100. Her thoughts about Lexa’s death and the Bury Your Gays trope:

I never expected the level of importance around this event that occurred. I don’t think anyone did because it never intended to hurt anyone. It’s important that it happened because it put a spotlight onto an issue that obviously exists and affected a lot of people. That’s really important to acknowledge. But it suddenly places me as a representative for something that I did not know if I had the voice for or if I had the right to speak about. It was kind of a difficult thing to figure out: how to talk about it, how to say it […] It’s such a multi-faceted question and situation. The fact that this character had such an impact on everyone and stood for something so beautiful, and was such an exceptional character, that I think is the core of it all. You know, love is love and that’s just it.

She also made some resonating points about being a role model in a day and age where every single thing we do or say ends up online forever and can be considered as “problematic”:

I definitely had role models when I was kid and I know how important they are obviously. They set great values […]. It’s hard now because anything and everything is recorded so things that you don’t necessarily mean to be recorded or taken out of context can then be transferred to what a role model should be or should not be. I feel like the lines of where a role model is now are blurry or a grey zone. There is a lot more pressure on people of what should be a role model and what is classified as that, especially with the laws of privacy changing. Technology changed a lot from when I was young. Role models for me were a popstar that did a performance. Then you saw an interview and that was the best thing ever. Now everything is online and every little detail is accounted for. Being the position I am in now, it’s hard to manage what you give out and don’t give out so that you’re not misinterpreted. It is really important. It is not to be taken for granted, you know, someone’s intentions. […] People still have that original idea of what a role model is and especially with young girls. Female role models are now taking a much bigger stand. You have these awesome ladies on screen and TV who are finally being represented in a starring role. That’s fantastic for young girls. But then it’s also where are the lines there, what does that mean with our changing technology, changing values, liberation and sexual orientation. It’s very multi-faceted which is fantastic.

The topic of family in Fear the Walking Dead what also brought up, especially the relationship between Alicia and Madison and the way it plays out in the current Fear episodes. Debnam-Carey pointed out that mother/daughter relationships are not often shown on screen as shows tend to only focus on father/son relationships. But for her, the Alicia/Madison dynamic is more interesting in the sense that it is more complex even though both characters tend to be alike in many ways. However Alicia’s definition of family is constantly being redefined:

The construct of family is definitely changing from Alicia’s point of view. Alicia did not necessarily grow up with a typical family unit, having a single parent and a brother that is not always there. She is a little bit more adaptive to having a relationship with whatever family is around.  What is interesting about The Walking Dead and Fear [the Walking Dead] is that it started out with seeing a family in Fear and then seeing how separated we’ve become; whereas with The Walking Dead, we’re seeing these strangers become a family. We’re going to see that scale beginning to tip between the two [shows]. In Fear the Walking Dead, we’ve got these families that are now going to find a family with strangers, especially with Alicia’s grouping right now. Now it’s about choosing your family and not about “blood is stronger than bond”. That’s definitely something we are exploring.

Her panels also brought some funny tidbits to the surface. My favorite being this one:

Giant squids are the coolest weirdest creatures of the deep. 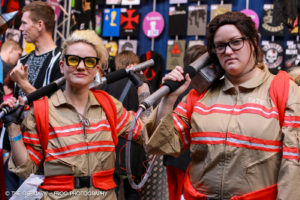 Lastly, I want to point out how great the volunteers and staff have been during Comic Con Copenhagen. Kudos to them for keeping their calm & listening to the attendees all weekend, especially for all the Debnam-Carey related chaos. Handling such a passionate crowd is no easy job and the improvements made from Saturday to Sunday helped a lot.

As a whole, I had a great time at Comic Con Copenhagen. The panels were great, I met fun and interesting people and I got to cosplay my inflatable dinosaur costume for the first time! I am really looking forward to attending the convention again next year.