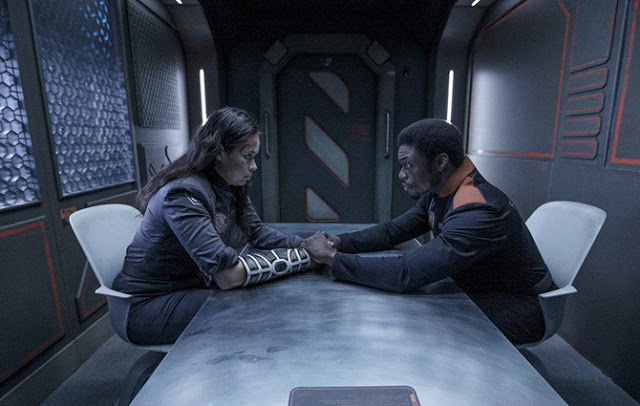 Tensions continue to rise in “The Seventh Man” as Earth, Mars, and the Belt head towards peace talks in the aftermath of the Ganymede battle.

Politics take center stage in “The Seventh Man” as everyone tries to deny responsibility for the events of Ganymede. Erringwright claims that Mars were the aggressors while Chrisjen argues that they were provoked, and that sending more ships will only exacerbate the situation. She presses for a peace conference, which naturally Erringwright scoffs at. Perhaps one day, we’ll learn why he seems to be so eager to go to war with Mars, but for now, we watch how these upcoming peace talks raise the tension literally everywhere.

Fred Johnson’s position on Tycho Station is becoming more tenuous with every episode. The reappearance of Anderson Dawes highlights how shaky Fred’s control really is, as most people don’t truly consider him a Belter. Fred, Anderson, and Holden disagree as to what position they should take during the Earth/Mars peace talks; Holden speaking up causes tension between him and Naomi, who points out that everyone else will only see two Earthers 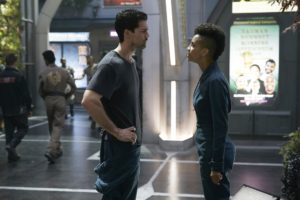 trying to tell Belters how to run their own lives. This serves as a reminder that Naomi and Holden are from very different worlds, which will surely continue to strain their relationship. I can only imagine what will happen when Holden learns that she didn’t get rid of the protomolecule when she had the opportunity.

Everything comes to a head when Anderson visits the Roci and has a direct confrontation, where he begins to suspect that Naomi and Holden are hiding something about what happened on Eros. This leads him to cozy up to Drummer, who probably points him in the direction of Diogo, who tells him about the scientists they were meant to capture on Thoth. Predictably, Anderson kidnaps Cortázar in order to give the Belters leverage in whatever negotiations are going to take place at the peace conference.

I’ll be honest; even though I watched last week’s episode, I’m still a little fuzzy as to what exactly happened on Ganymede. I suspect the editing of that sequence played a fairly big role in my confusion, but in any case, I was hoping that “The Seventh Man” would clear some things up. As the episode continued, I began to suspect that this was intentional. As Bobbie is struggling to put together the details of what she experienced, so too is the audience unclear, until she takes the magic pill and is able to more fully remember what happened. Unfortunately, it reveals that Bobbie’s team fired on the UN Marines, mistakenly believing that they were being fired upon.

I’m not so patiently waiting for Bobbie to meet up with the Roci crew, because I honestly can’t wait to see that, but I’m beyond thrilled that she’ll be heading to Earth, because her meeting up with Chrisjen is something I didn’t know I needed until now. I would also very much like to learn more about the mysterious seventh man, but I get the feeling we’ll soon know more.

Previous:Getting to Know “My Life As I Knew It” with Author Peri June!