All of the pieces of the puzzle in The Expanse are finally falling into place. “Cascade” was politically very heavy, but had some very intimate moments that were actually a welcome reprieve from all of the action happening around the solar system. I would argue that many viewers probably felt that “Cascade” was a bit of a filler episode where not much happened, and it might even be categorized as a bit slow. I personally loved the episode. Although it wasn’t the best in the season, there were so many special moments that made it very strong.

“Cascade” is the episode where I finally fell for Bobbie Draper. I felt bad for her at first; having to travel to Earth to represent her team and explain her side of what happened on Ganymede. Once again, the science of that trip to Earth was impressive as we learned what Martians have to go through physiologically once they step on Earth. Having stronger gravity and being closer to the Sun really takes its toll on them, but Bobbie didn’t let that stop her from escaping her room, taking a tumble, and heading the ocean. The ocean story seemed a bit odd to me, but when it actually happened, it made me understand Bobbie in a way that I had not considered before. After spending her entire life on a completely desolate planet, she got to see the one thing that made life on Earth flourish 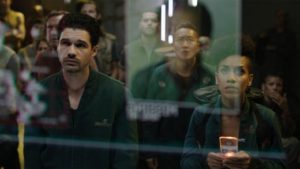 : water. We don’t really know what state the oceans are in at that point in time, but it was still striking to think about from Bobbie’s perspective.

One of the other moments that I really loved was Chrisjen meeting Bobbie at the ocean. I love the chemistry that the two characters have, and although Chrisjen has her own political agenda, it felt like she was completely genuine in her concern for Bobbie’s well-being. I am hoping that Chrisjen will provide Bobbie some sort of immunity in order to keep her safe, particularly since she now has knowledge of the protomolecule humanoid (it’s not aliens!). I do wonder what Errinwright’s motivations were for finally spilling to Chrisjen his involvement in the protomolecule development, but I hope for his sake it is concern that things might be taking a turn for the worse and he wants to share what he can to help stop it all. Optimistic, I know, but more likely has something to do with him saving his own neck.

Meanwhile on Ganymede, we got some intense moments with the Roci crew. Who else is totally loving Meng? Can he please become a member o 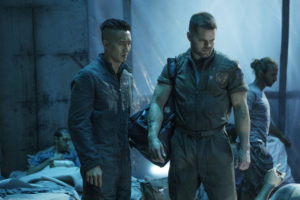 f the main cast? Unfortunately since the actor is still guesting, Meng probably won’t be around forever. I just really enjoy the dynamic that he brings to the crew, especially his relationship with Amos. Amos is generally a tough cookie, but there is something that happens to him when he is around Meng–it almost seems like empathy. I like seeing that side of him. After hearing Meng explain to Amos that Ganymede’s food sources are basically dying, though, I am bracing myself for the impending starvation disaster that will happen in the Belt. Those Belters just can’t catch a break.

I did want to mention that one scene in the Roci with Alex because how beautifully shot was that? I know that it mostly showing off the visual effects capabilities of the show, but it was a lot of fun to watch and visually gorgeous. Who knew that Alex, a little Hank Williams, and some gravity fun with drinking would become such a memorable scene?

Overall, “Cascade” was a surprisingly strong episode. From Bobbie getting advice on how to walk like an Earther to finding out that Meng’s daughter is alive, it was all compelling. I do hope, however, that next week we get back into the action that we all know and love on The Expanse.

Previous:“Amberlough” Is Beautifully Written and Will Probably Make You Miserable