The Expanse 2×11 Review: “Here There Be Dragons” 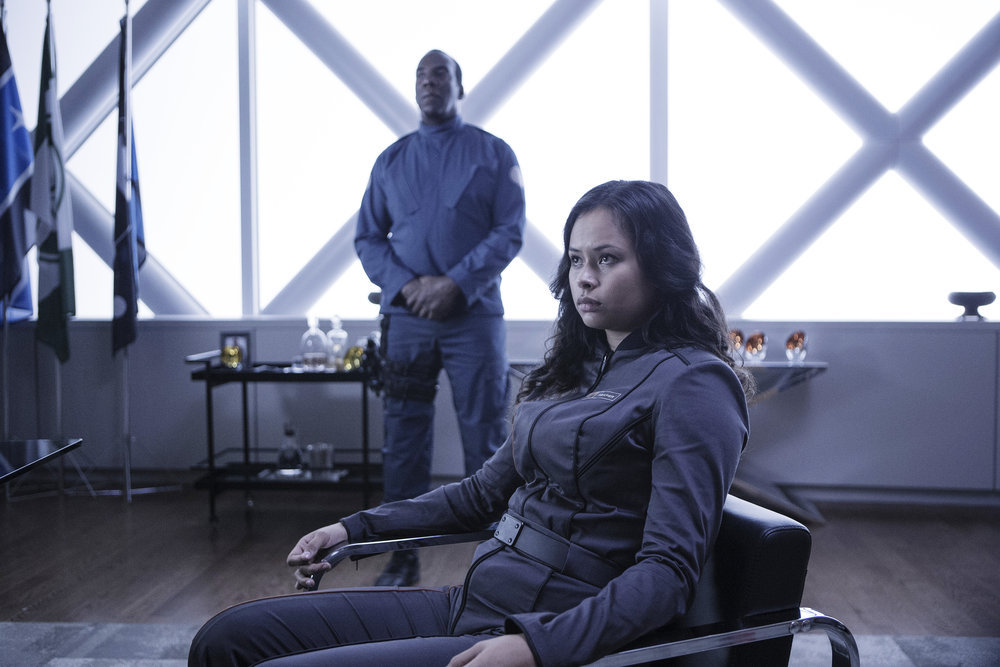 There’s a sad lack of dragons in “Here There Be Dragons”, but it’s an episode that doesn’t lack for anything else. Between a shootout, Bobbie’s dramatic escape, and the band breaking up, The Expanse is clearly gearing up towards one major finale.

There is a great metaphor in Bobbie’s arc that mirrors a lot of what is going on with the generational gap. Martens, as an older Martian, sees Bobbie’s generation as weak because they haven’t had to sacrifice as much, so he and the others are literally turning them into sacrificial lambs. Kind of like how the Baby Boomer generation is doing its level best to screw up the planet for the rest of us and then blaming the younger generations for it. In the end, though, Bobbie proves that she is “more of a Martian” than Martens because all it takes is a couple of punches to the face, and he folds like a card table. Bobbie’s defection was probably my favorite bit of “Here There Be Dragons”, because it led to a sass-off with Chrisjen, and after their first disappointing encounter, I have been waiting for this.

It’s times like this when I feel like more backstory about the relationship between Earth and Mars would be beneficial. It seems to be a simple colonial story that calls back to the founding of the United States, but the very notion of space travel removes the simplicity from the equation. Their tenuous relationship is at the core of this show, and the battle for control over the protomolecule may not be any more nuanced than “I want this because I don’t want you to have it”. It’s becoming ever more apparent that Mars is responsible for the protomolecule in the first place, and I’d be very interested in learning how and why. (AUTHOR’S NOTE: Mao, not Mars. That’s my bad.)

“Here There Be Dragons” as a title is both a direct quote from the episode and a reference to medieval cartographers, who used the phrase on maps to denote unexplored territory. It comes from the science ship surveying the Eros wreck on Venus, which continues to be a minor yet still important plot, as they are able to get only a glimpse of the wreckage before the unusually acidic atmosphere destroyed the probe. That glimpse was enough to prove that whatever was alive on Eros is still kicking. 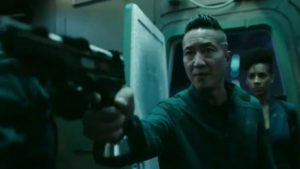 Meanwhile, things on Ganymede are worse than everyone thought. The cascade that Prax mentioned last week has already started happening, as the Roci crew moves farther and farther into the old, abandoned sections of the station. Using a skeleton key they got from chicken guy, they manage to stumble across the research team that was developing the protomolecule on Ganymede. Prax, armed because he wants to fight for his daughter, spots Mei’s backpack and demands to know where she is, but as a newcomer to firearms, he is startled by one of the team and they end up in a shootout. In the melee, Amos gets shot in the arm and a few of the scientists are able to escape. This leads to the discovery of one of the proto-human hybrids, a young child in some sort of cryogenic tube. It isn’t Mei, but given the flashbacks we were given and the state of the little kid they found, we can surmise that her fate is…not good.

Terry Chen is doing a marvelous job as Prax, particularly in “Here There Be Dragons”. As they learn more, he seems to be coming to the conclusion that he isn’t going to find his daughter – at least, not as he remembers her – but he seems determined to know the truth and is willing to fight for it. I love seeing him integrate more fully into the crew. Wes Chatham (Amos) is also surprising me this season. I didn’t particularly care for Amos in season 1, but I’m extremely impressed with his development in season 2. I think being introduced to people who literally had their empathy removed has caused him to do some serious soul-searching about himself.

Later, the Roci crew are surprised by a grenade suddenly being thrown into the room, but Amos’s quick action saves them and causes some sort of incident. The crew ready their weapons at the sounds of gunfire, but air being sucked through the vent indicates a breach. Whatever was being kept in the next room crashed through the hull and escaped onto the surface, killing the scientists who fled the shootout. Alex shows up to give them a ride, but then  Naomi breaks up the band. They’ve been moving towards this for a while now; as they get more involved with the protomolecule, Naomi and Holden are on different paths. Their philosophies are changing. Holden is set on seeing this through to the end, and that may be lingering guilt or it could be leftover from his days in the service. (Navy? Was he in the Navy? I don’t remember.) However, Naomi, probably because as a Belter she recognizes the danger, wants to stop hunting the protomolecule and provide help to the people.

So now we have a bunch of dead scientists, Chrisjen off for a meeting with Mao, Bobbie as a political refugee, the Roci crew split, and still no idea where Strickland is. With only two episodes left in the season, things are about to come to a head.

What did you guys think of “Here There Be Dragons”? Do you have any finale predictions?