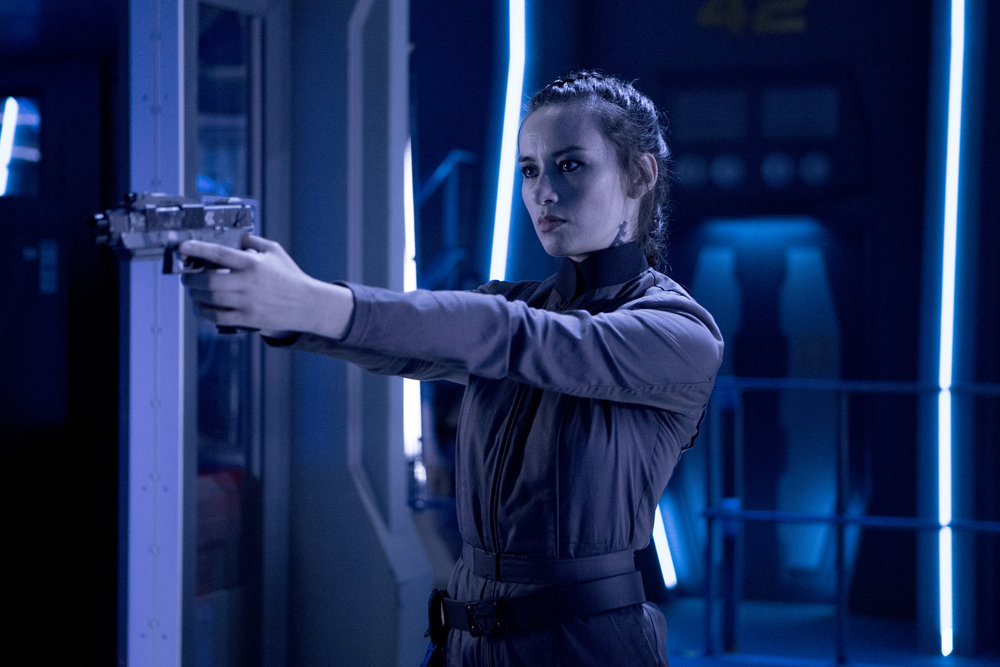 This was my favorite episode of season two. It had everything: amazing story, incredible visuals, and no boring filler (not that The Expanse usually does). “Pyre” felt like a penultimate episode even though we still have two more episodes of season two left, and it makes me hungry for what is to come over the next two weeks.

First of all, I need to talk about how awesome Drummer was in this episode. Sure, she has been pretty cool up to now, but she knows how to do a swan song (even if she ended up living). She is an absolutely compelling character, and we probably won’t see much more of her for a while, but it is clear that she knows what she is doing. I was in complete awe when she shot the Belters after the Tycho coup–she had just nearly died herself. There is no doubt that the women on this show are the ones to watch.

While we had no storyline on Earth in “Pyre” and therefore no Chrisjen, we did get to meet a new character, Meng, who had a fascinating story to tell. I loved the way that his story was portrayed to us: first in flashback and then catching up with him on the refugee ship and eventually Tycho. His story was heartbreaking, though, between 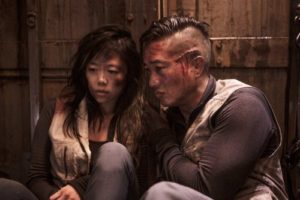 losing his daughter and his friend right before his eyes, and now it seems that his information will be invaluable to figuring what happened on Ganymede and how Protogen played a role in all of it. I am also looking forward to Meng’s dynamic on board the Roci.

As of late, Amos has been one of my favorite characters just because he is so layered and mysterious. Luckily for us, it looks like we might dive a little bit into his past and learn more about him soon. He was unusually standoffish on Tycho (and brought out of it thanks to Alex), but it seemed like he was mostly brooding about his past and Lydia. I am hoping to learn more about his history soon. And thanks, Show, for mentioning Alex’s family this week since we hadn’t really heard him mention them for a while.

While Amos and Alex are busy reminiscing over their past, Holden and Naomi had some special moments. I do enjoy that even though the two of them are in a relationship and we get to witness some of the tenderness, it isn’t a focus from scene to scene. I appreciate that it is subtle, and it makes their interactions seem more realistic. Even though “I love yous” were exchanged, I don’t believe the two of them are in sync and I think we are beginning the end of their relationship (I could be totally wrong, though–I am not a relationship expert!).

We can’t talk a 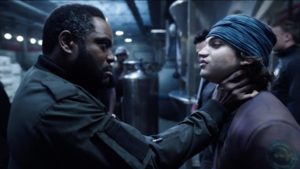 bout “Pyre” without touching on Fred Johnson. First of all, kudos to Chad L. Coleman who gave an interesting portrayal of the character. Frankly, I am a bit surprised that he is still being credited as a guest star since the role has been much larger over the two seasons than I was expecting. I am sure that we will see more of Fred in the future, but obviously on a smaller scale. As Holden insinuated, Fred’s turn as head of Tycho is over.

Indeed, war is coming. Even though it felt like this episode did not have as much large-scale implications, it was necessary to the story and very beautifully done. It was fast-paced and action-packed even though it was mostly character-driven. As always, the Belters are stuck in the middle of the war between Earth and Mars, except this time, they have a lot to say. I can’t wait for next week to see how everything falls into place, and how Meng’s story will help move the Roci along.