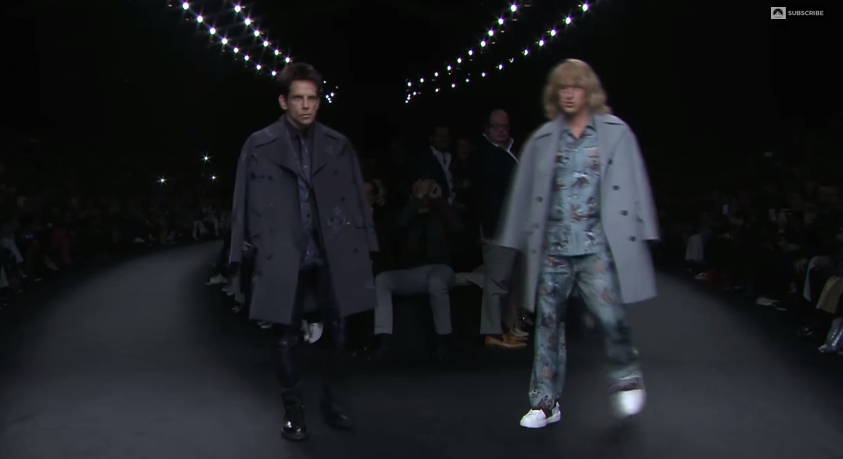 Okay so yesterday I pissed some fanboys off by saying that Sony had to order an ALL DUDE Ghostbusters. This is not true they tell me; it’s actually just a movie about two dudes who are friends there will be other characters. Unlike the ALL GIRL Ghostbusters, which has four women and is therefore ENTIRELY WOMEN. Look, fellas, I’m as excited as you are to watch Chris Pratt and Channing Tatum be adorably dudetastic with each other, but it doesn’t change the fact that Sony’s decision is pretty sexist. If you’re not willing to admit that Hollywood has diversity issues, then you’re part of the problem.

Derek Zoolander and Hansel walked the runway during Valentino’s show as part of Paris Fashion Week. It’s nice to see that the men, once rivals, have put aside their differences to work together at this prestigious event.

In case you haven’t guessed, this whole stunt means that Zoolander 2 is officially a go. In a tweet, Paramount Pictures confirmed that the film is set for release on February 12th, 2016. (via Rolling Stone)

The whole thing was super fun, but I got to say that this Vine wins the night.

The Grace Helbig Show has a premiere date: it will air April 3 on E! (via EW.com)

This parody trailer that highlights the age difference between male and female co-stars is a little too close to the truth. It’s gross, Hollywood. Stop doing that. (via The Daily Dot)

You can watch the first episode of Sony’s superhero series Powers on YouTube right now! (via ComingSoon.net)

Check out the first two clips from The CW’s upcoming comic book adaptation iZombie. (via ComicBook.com)

I’m not really sure about the “gritty” feel to the latest Daredevil trailer. It kind of makes it look exactly the same as every other gritty superhero crime drama. But I’ll let you decide.

The trailer for Inside Out is all about tween girls feels and I LOVE IT!

Finally here’s a little something for my feminist fangirl friends – The BBC has suspended Top Gear presenter Jeremy Clarkson! AND a jury ruled that “Blurred Lunes” infringed on the copyright of Marvin Gaye’s “Got To Give It Up” and ordered Pharrell Williams, Robin Thicke and others to pay $7.3 million dollars. Don’t you love it when misogynistic assholes get their dues?