While the past few seasons have been a war among several Kings, the emphasis has been subtly shifting until it’s become a war among Queens.  This season has been far more female driven than any seasons before it, putting the women we’ve grown to love (or loved to hate) into positions of enormous power that rivals their male counterparts.  I’m honestly rooting for a female dominated end game, with Daenerys in the Iron Throne and Sansa in the North, so I’m incredibly pleased to watch it move in that direction.

Jaime and Ser Bronn are off on their own Buddy Cop Adventure to rescue Myrcella, which is one of the only primarily male driven subplots happening on the show right now.  Even while these two dudes are off on their own journey together with no women present, there’s a strong female energy in what isn’t being said between them.  While sailing south to Dorne they pass Tarth, known as the Sapphire Isle, which reminds us of his partnership with Brienne.  Her name isn’t mentioned, but she’s Brienne of Tarth, so we’re definitely reminded of her. We also had the strange moment between Jaime and Bronn where Bronn heavily implied that he knows Myrcella isn’t Jaime’s niece.  Neither of them said a word about what was being implied there, but the topic hung heavily between them.  Lastly we had their discussion about how they want to die, where Jaime says he wants to go in the arms of the woman he loves.  One has to wonder if he’s referring to Cersei or Brienne?  His relationship with Cersei has been tumultuous in recent years while his partnership with Brienne has been strengthening.  But his love for Cersei, as squicky as incest can be, is still legendary. 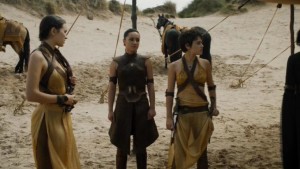 Jaime and Bronn’s story brought them to Dorne, where we were introduced to the Sand Snakes.  You want to talk about Girl Power?  The Sand Snakes are all about that.  It’s also added some canonically POC characters to this overwhelmingly white narrative.  In the bulk of Westeros’s other six Kingdoms, and even Beyond The Wall, the people are majority light skinned.  The only place on the continent that isn’t true is Dorne.  Outside of that you have to travel to Essos to get some racial diversity.  The best part of these amazing POC characters is that they are played by actual POC actresses.  There’s some debate about the exact skin tone of these characters, but we can take some comfort in the fact that they didn’t cast Caucasian actresses in the parts.  Better yet, they aren’t majorly POC characters suffering from White Savior Syndrome, like the freed slaves in Mereen are.  They have their own story, their own heroes, and their own agency.

Best part?  Dorne is now part of the opening credits which I’ve been speculating about for years.  I love how it was done.  Bravo all around.  Rah rah, go Dorne!

Back in the main part of Westeros we have two fierce Queens fighting for control over King Tommen.  Cersei made a play to get Tyrell out of the capitol and get Loras arrested for homosexuality.  This leaves Margaery without much family or support outside of her husband.  This has forced Margaery to step up her game with Tommen, making her control of him more overt than it has been.  There’s no doubt she is manipulating him, but so far she’s managed to fly under the radar.  Her brother being arrested pushed some very emotional buttons for her, though, and her innocent mask slipped a bit.  The war between her and Cersei has been bubbling under the surface for the past season and a half, but now it’s reached a tipping point.  Something has got to give. 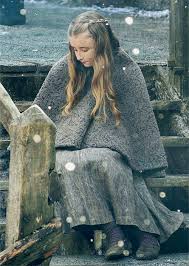 Meanwhile at The Wall all of my love goes to Shireen.  She owns my heart.  Shireen’s the only thing that brings out the softer side of Stannis and she even has Melisandre defending her from her mother’s cruelty.  It’s been a while since I read the books, but I don’t quite remember this much focus on Shireen.  It’s an excellent idea, though, because she’s added so much to the characters in Stannis’s group.  And hey, look, another potential Queen to add to the mix.  While Melisandre seems to be the one pulling the strings, she doesn’t seem to be aiming for power.  She is completely devoted to her religious convictions, which tells her that Stannis is the Prince That Was Promised.  Stannis’s blood flows through Shireen’s veins.

Moving back to Winterfell, we have Sansa.  Do we have to talk about this?  Because Sansa in Winterfell is why I cry at night.  If you’ve read our Season 5 Roundtable you know a lot of the staff here feels the same.  I don’t want to talk about the kiss with Littlefinger, either.  These things happened.  It sucks.  Let’s talk about something else.  Lyanna!  There was a large focus on Lyanna’s history in Sansa’s scenes, which I’m pretty happy with.  She’s an important character, but we’ve only had brief passing mentions of her so far on the show.  She’s the reason why Robert’s Rebellion started, why the Targaryen’s were ousted from the Kingdom, and possibly has some other significance in highly popular fan theories (L+R=J anyone?).  If we have to have Sansa in Winterfell right now, at least we get some history lessons.

Another moment in Sansa’s story that made me happy was the implication that she can be Wardeness of the North.  This is something I have been rooting for for years.  The books and the show are wildly different at this point, so I’m actually pleased that the show is closer to this end game scenario than the books are.  I’m not happy with how she’s there, but I’m all about Sansa claiming the North back for the Starks.  She has what it takes to be Queen, so let’s give her her homeland to rule.

Speaking of Queens, Daenerys didn’t show up until 40 minutes into the episode, but her plot got lots of narrative importance.  Like our heavy Lyanna focus during Sansa’s scenes, Daernrys’s scene had a strong emphasis on Rhaegar’s history.  I don’t think it’s a coincidence that we’re getting so much backstory about these characters.  I think it further solidifies the popular fan theories surrounding them.  At this point I wouldn’t be surprised if the show confirms the theories before the books do.  It certainly looks like we are moving in that direction.

This episode was, however, called “Sons of the Harpy,” so it’s no surprise that the climax of the episode focused on this fanatical group.  Two of our favorite Daenerys supporters, Grey Worm and Ser Barriston Selmy, are in mortal danger.  But the episode left on a cliffhanger, so we have to wait another week before we know for sure if they make it through.  At this point, knowing how the books plays out is useless.  Us book readers and you show-only people are in the exact same boat.  What will happen next week?  I don’t know.  All I can do is pray to the Old Gods and the New that we don’t lose these two awesome characters. Daenerys needs her loyal supporters now more than ever.

**Note: If you choose to discuss the L+R=J theory in the comments, preface your comment with “SPOILER.”  While the books haven’t confirmed it, it is still based of information that the show readers haven’t received yet.**

1 thought on “Game of Thrones 5×4 Review: Sons of the Harpy”