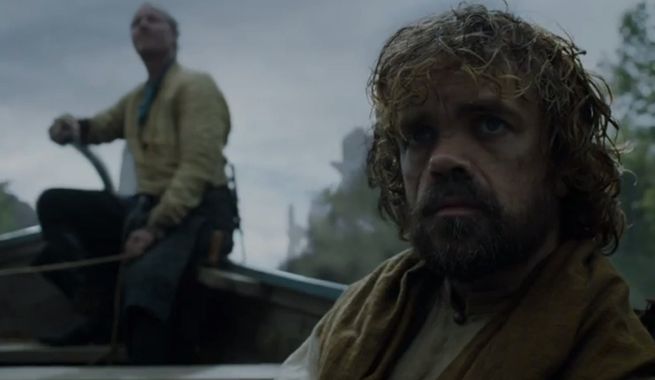 I’m still pretty ‘nope’ about everything involving Sansa in Winterfell, and the resolution to the cliffhanger from last week left much to be desired, but I’m still entirely committed to this show.  I can’t help it.  As frustrating as these plot lines are, there’s still enough for me to get excited about to be completely here for this.  But please, Game of Thrones, can we stop using sexual assault as a plot device?  We know these characters are terrible already.  We don’t need to add this type of assault to the mix to drive the point home.

Last week’s cliffhanger was half-satisfying, half-absolutely horrible.  Grey Worm lived, but we had to say goodbye to Ser Barristan Selmy.  This loss is a huge blow to Daenerys.  He crossed the Narrow Sea to help her, had served under many Kings in Westeros, and knew her father and older brother Rhaegar.  Ser Barristan Selmy was also a voice of reason for her and gave her a much needed perspective of her homeland that she couldn’t get from those who were currently giving her council.  He was one of the most honorable characters in the entire Game of Thrones universe, which means this universe has become just that much more corrupt.  But I guess that’s kind of par for the course.  Now she’s left without this much-needed perspective and is turning to people like Missandei, who is pretty much just a translator and friend, to give her council.  I have no doubt that Missandei is intelligent (she knows how many languages, again?), but she’s not exactly someone who is able to fill Ser Barristan’s shoes here.

Meanwhile, Lord Commander Jon Snow is shaking things up at The Wall quite severely.  The Wildlings are no longer the enemy.  I was bothered by the part of John Snow’s little speech when he asked ‘how many of your people can’t fight?’ then he mentioned women along with the elderly and the children.  Did we forget how badass Ygritte is?  Some women in the Wildlings culture do take on more traditional feminine roles such as cooking and raising the children, but the Wildlings also respect female warriors.  I was kind of bummed with that line.  Especially from Jon Snow, who knows how badass their women could be.  But anyway, moving on from my constant feminist lens through which I view media, I’m happy to see people care about the White Walkers and the Wights that are quickly advancing on Westeros.  It seems like everyone outside the Wall and north of the Wall is too busy being wrapped up politics to realize the entire realm is in danger.  Until the White Walkers are knocking on their door, it seems like a non-issue for almost every other character. 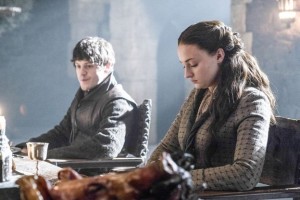 Now, here is where I have to put my feminist lens back on because I just can’t leave this plot line alone.  Sansa Stark is STILL the reason I cry at night.  I need this plot to resolve quickly and in a satisfying way.  At this point I don’t even care how far it diverges from the books as long as Sansa ends up safe and away from the Boltons.  I’ve got to give Sansa some credit for being brave enough to talk back to the Boltons when they called her home a ‘strange place’.  The Boltons are vicious and could kill her, but she’s in a place of political power where they need her to hold the North together.  If they kill her, they know that things can fall apart for them.  I still don’t think she’s safe, though, because they can break her like they broke Theon.  There are worse things than death, and Theon’s existence is proof of that.

Warning: The following paragraph comes with a trigger warning for rape.

The topic of rape has entered the Boltons story quite blatantly, too, which is quite worrying.  Roose Bolton told Ramsay that he raped his mother after murdering her husband after they’d married without his consent.  We also know that Ramsay has a lover on the side, so despite his fondness for her I am worried they’ll introduce rape as a plot device yet again.  The character from the books, Jeyne Poole, underwent heaps of sexual assault and psychological torture, so while the show has taken a very different route, I’m still deeply concerned that that’s one element they might choose to keep.  I don’t know if the show creators just think that rape makes the show more edgy, makes the bad guys seem more bad, or what, but it’s gotten pretty extreme.  The books, while they did feature rape, didn’t feel nearly as heavily focused on the topic as the show seems to be. 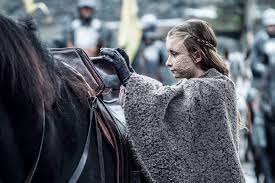 The good news is that Stannis is riding south to Winterfell.  He’s got his army and family in tow, which means more Shireen.  My darling Shireen!  I have no idea how this is going to play out, but whatever happens I need more Shireen in my life.  I’m sad to see her and Gilly split up, though, because they had an incredibly sweet friendship.  I have no idea if they’ll be reunited, but I hope this isn’t the last we see of the relationship between them.  I also hope that Stannis and Melisandre can keep her safe not only from the impending battle at Winterfell, but from her mother’s obvious distaste for her.  If you dislike Shireen, I dislike you.  End of story.

Greyscale has also made an appearance in a plot line I wasn’t expecting.  Jorah chose to take Tyrion through Old Valyria to get to Meereen.  First off, Old Valyria is one of my favorite locations in the books and I have loads of theories about what happened to it, so on the surface I was really happy to see them take that route.  But when the Stone Men (those affected with Greyscale and isolated together like Lepers) attacked them, I grabbed my head and just started shouted “what’s happening?!” at the screen.  I’m not exactly upset with this turn of events, but I’m really thrown for a loop here.  Now Jorah is infected with Greyscale, but he’s hiding his condition.  I actually think I prefer this plot over the pirate plot from the books, but I’m also completely confused and unsure of how this will affect things going forward.  So… once again us book readers and you show-only folk are in the same boat.  We have no idea what’s going on.  Exciting, right?

This season is bizarre due to its extreme divergence from the books, upsetting because of the potential for sexual assault against one of our favorite characters, and confusing as hell.  Yet somehow I’m still counting down the days until the next episode.  The show is gorgeous and I’m attached to the characters more than I am some people I know in real life at this point (no, not you, dear friend who chooses to read my reviews…  I love you more than Daenerys I swear… um).  This is one of those shows I could never rage quit if I tried.  I’m in this for the long haul.