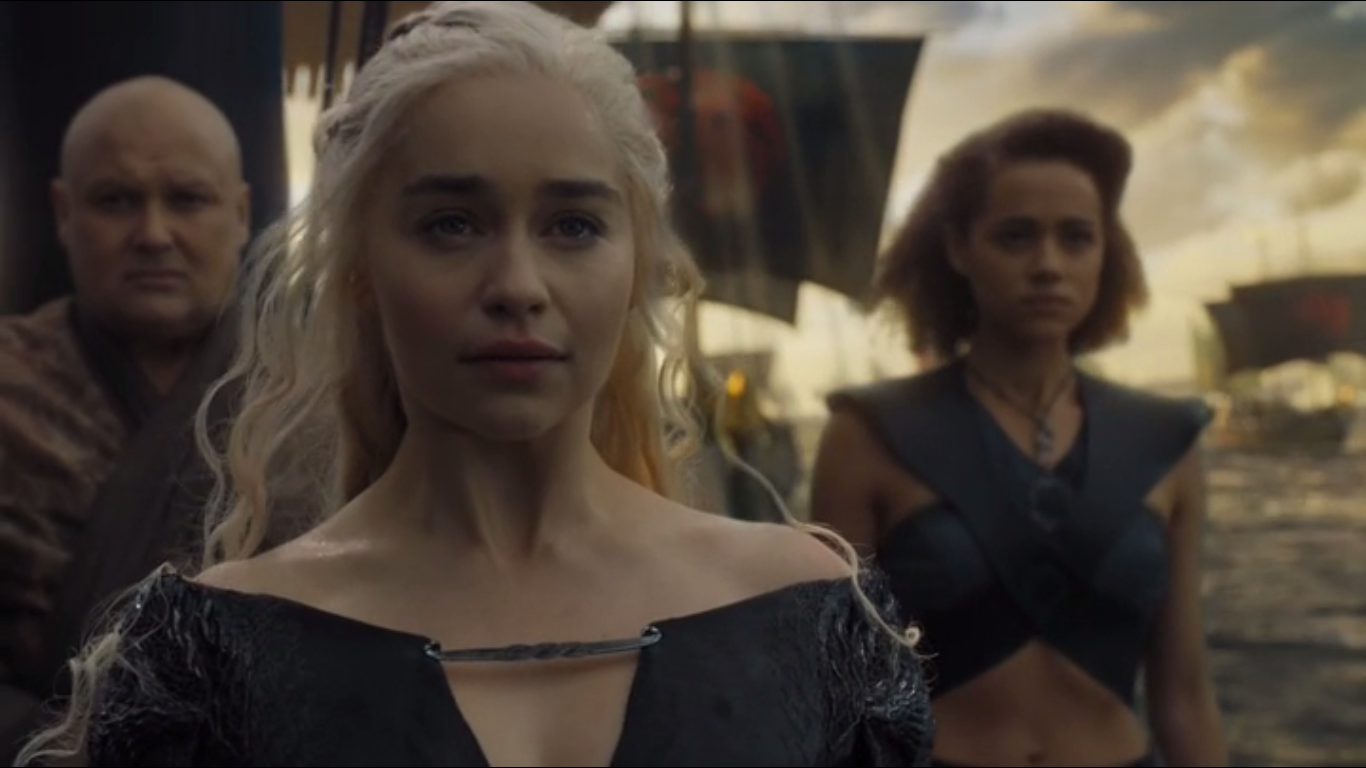 I’ve been thinking about “Winds of Winter” for over a day and I’m struggling to put my thoughts into words.  It’s not that there isn’t anything to say.  Quite the opposite in fact.  There’s too much to say. 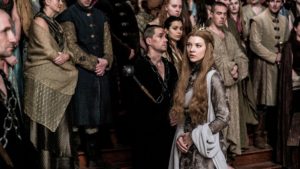 Most of my reviews for season 6 have contained at least a few sentences complaining about how boring the plot in Westeros has become.  Well, I can decidedly say that Westeros was the opposite of boring in “Winds of Winter.”  Even Margaery, who has become a major disappointment this season, showed some of the spark that made me fall in love with her as a character.  She showed her bravery and her intelligence and tried valiantly to save those in the Sept, but she lost her life in the process.  Margaery, her brother, and her father all perished in a Wildfire blast that took out the High Sparrow and all of his little birds in one fell swoop.  Despite my recent complaints about her, I’m going to miss Margaery.  I was really hoping she would rise to the top.

It feels strange that the biggest build up of “Winds of Winter” came near the beginning.  To me, Lancel being led to the barrels of Wildfire beneath the Sept, watching him crawl helplessly towards the candles as the flame inched closer to the volatile liquid, and then the eventual explosion felt way more like a climax than the rest of the episode.  People have been speculating about this for weeks. We’ve known about the Wildfire for many seasons, but Bran’s vision of a tunnel filling with green flames has fueled speculation about what it could all mean.  The entire sequence of events still shocked me, even though the speculation had prepared me for it.  The loss of Margaery particularly left me distraught.

Unable to cope with the loss of his wife and the stress of being King, Tommen took his own life, thus assuring that Cersei finally got to sit atop the Iron Throne.  She’s been trying to sit on the throne since we first met her, but I never actually thought she’d achieve it.  Cersei can be pretty vile, but a small part of me feels sorry for her that her victory had to come at the loss of every single one of her children.  She’s murdered people left and right without a second thought, but I’ve never doubted her love for her kids.  I suppose that’s karma.  She gets what she’s been after, but at an extremely high cost. 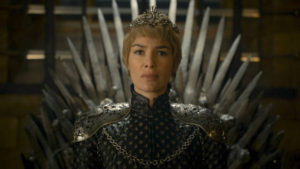 Cersei won’t keep the throne.  Of course she won’t.  She’s got enemies coming at her from every side now.  The Starks have control of the North again and Daenerys is sailing to Westeros backed by the Greyjoys, the remaining Tyrells, and the Martells.  This isn’t looking good for her.

After the dramatic events in Westeros, “Winds of Winter” cuts to Sam at the Citadel.  As much as I love Sam and as adorable as he looked in that huge library, this entire scene felt extremely out of place.  I suppose we needed something cute to take the edge off?  And what’s cuter than Sam and Gilly.  And Sam and books.  And Sam just generally being a geek.  Nothing, that’s what.  Still, if his time at the Citadel doesn’t lead to something extremely important this sequence will feel even more out of place in retrospect.  Every single plot point from this episode was huge.  And then we have Sam and… books.  Where is this going?  Again, I adore Sam but… where is this going?  I hope he finds something super important in those books and then gets to live happily ever after with Gilly.  Somebody deserves some happiness here.

After our little romp through the library with Sam, “Winds of Winter” goes North.  Daavos confronts Melisandre about Shireen, and Good Guy Jon Snow promptly tells her to GTFO.  Yeah, that whole child murder thing was pretty awful.  But she did bring Jon back from the dead.  She’s kind of useful.  Honestly I’m conflicted.  She’s a fanatic and killed one of my favorite characters, but the power to bring someone back from the dead is pretty helpful.  Especially so for the Starks since they seem to drop like flies quite often.  Still, Jon Snow was confident in his decision and sent the Red Witch packing.

The political shuffling of the North hasn’t exactly gone as I was hoping it would.  After last week’s epic Leeroy Jenkins maneuver, I think it’s pretty obvious that Jon has way too much emotion guiding his battle strategies.  Sansa used to be the one led by her emotions, but she’s since learned to play the game.  She should be Queen of the North.  Even though Jon isn’t a bastard anymore, he swore his life to the Night’s Watch.  And yeah, okay, he died, so maybe that frees him from his service to the watch.  But if he’s going to have a claim anywhere it would be the Iron Throne since L+R=J has now been proven to be real.

The L part – which stands for Lyanna – was spelled out perfectly clear.  The J, of course, is Jon.  So Lyanna + R = Jon.  Sure, they haven’t named the “R” yet, but think about it people.  Who put her in that tower?  Who was she with for all those months leading up to Jon’s violent and bloody birth?  Why would they keep this child a secret if Lyanna was just having some dude’s child and it was nobody important? I mean, I guess since they didn’t explicitly state who the R is, it’s still a spoiler?  So I won’t be stating it, but seriously folks, click the link here.  Happy reading.

So anyway, my point is he’s not really the strongest heir to Winterfell.  That would be Sansa.  I will stand by my Queen of the North until my last breath.  Get it, girl.  You’ve got this.

To the south of King’s Landing, Cersei has the Sand Snakes and what’s left of House Martell coming for her.  Lady Olenna, distraught by the loss of her son, grandson, and granddaughter, ran straight to the Martells and formed an alliance.  And then in waltzes Varys (clearly using a TARDIS or something, come on) and suddenly all the houses that hate the Lannisters are throwing their ships at Daenerys.  Sucks to be you, Cersei.  Sucks to be you.

But before we get to Danerys, I need to talk about Arya.  People seem to be cheering for her for finally getting to cross a name off her list but I’m sort of grossed out.  Slitting Walder Frey’s throat? Sure.  I can deal with that.  But the People Pie was a bit too much.  And this is coming from somebody whose favorite show is Hannibal.  See, I can accept the cannibalism in Hannibal because that’s the premise of the show.  Forcing this guy to eat his own children?  Gross, guys.  Really gross.  Good old Game of Thrones, pushing that envelope just because they can.  Good for you I guess. 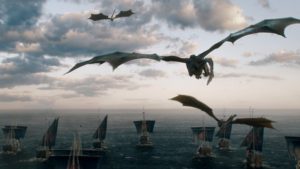 And finally – FINALLY – we get Daenerys setting sail to Westeros.  I never thought it’d actually happen.  I figured she’d just set up shop in Slaver’s Bay – excuse me- Dragon’s Bay, and rule there.  Now that Arya and Daenerys are both leaving Essos, everything is quickly closing in on Westeros.  The plot is focusing itself and we’re finally barreling towards a conclusion.  A huge chunk of the endgame I outlined three years ago is actually starting to come to pass.  Let’s take stock here:

Progress.  We’re making progress.  I’d like to add to my final endgame scenario that Yara is Queen of the Iron Islands (almost!) and maybe marries Daenerys (it’ll happen, trust me).   Three years ago I hadn’t put much thought into Yara.  Her book counterpart, Asha, didn’t grip me nearly as tightly as the show version has.  For many, the book version is superior, but dammit I love the show version and I don’t care if that makes me an outlier.

And with the conclusion of “Winds of Winter,” the sixth season of Game of Thrones comes to a close.  It’s been an unbelievable journey.  The pacing went from break neck to grinding halt in minutes.  Characters seemed to basically teleport around the world at a ridiculous speed.  And we lost some epic characters.  But at the same time, the plot is marching on.  The women are completely badass and my end game is finally slipping into place.

Previous:LGBTQ+ Book Recommendations
Next: Find Out More About Ilvermorny (And Get Sorted!)