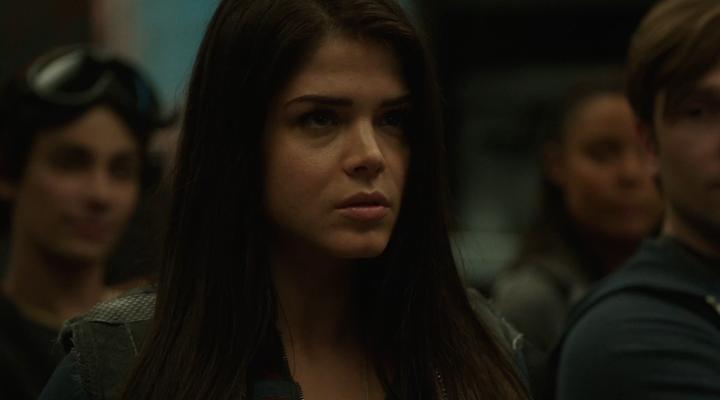 I have to be honest, when A.L.I.E. ordered that the gates of Polis be opened, I wasn’t expecting the horror that we were greeted with in “Join or Die”.

Of course it was *not* surprising that Pike and Kane both refused to take the chip in the cold opening of “Join or Die”, though when Pike got a hold of Ontari I felt a surge of respect for him that I definitely didn’t expect. Obviously his attempt was a futile one, but considering how obnoxious Pike has been so far, it was nice to see him try.

In fact, “Join or Die” featured Pike pretty heavily, though it left me more apathetic than anything else about the character. He was predominant in both the flashbacks and in the Polis dungeons, and I suppose I have to tip my hat to him for his attempts at teaching the “troubled” kids on the Ark, as well as for how he handled Indra exacting her revenge (or some of it, anyway). Unfortunately it didn’t help that the flashbacks themselves felt like what flashbacks usually are – unnecessary and not well-written. Yes, they gave us more insight into Murphy and added a bit to his interactions with Pike, but other than that the only proof that the flashbacks did any good was showing that Pike taught them (or rather, taught Octavia, specifically) how to light a fire.

The rest of “Join or Die” was split between the madness taking place in Polis and Clarke & Co.’s journey to find Luna, the only other nightblood left. I’ll get back to Polis in a bit; right now I want to focus on WOW HOW BELLARKE HEAVY WAS THIS EPISODE, RIGHT? (For those who may not know, “Bellarke” is the shipping name for Bellamy and Clarke.) 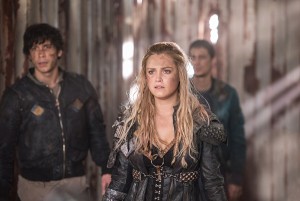 Yes, there was also a lot of interaction between Bellamy and Octavia (as he continued to try to mend their relationship and she kept pushing him away), but all of that definitely played second fiddle to Bellamy’s conversations with Clarke. If the writers/directors don’t mean for him to look at her the way he does and thus convince me that he is in love with her, well, then I’m not sure what to think. The only thing that tripped me up a bit here was when Bellamy admitted, “I was so angry with you for leaving”, if only because it almost sounded like he was blaming Clarke for his choice to take Pike’s side. I’m really hoping that wasn’t the case, but to be honest it was hard to tell. Did anyone else pick up on this?

Thankfully Octavia – with a little help from my beloved Jasper – figured out that there was a signal fire to [presumably] contact Luna. I’m not sure how I feel about how the Grounders who arrived rising up from the water with crossbows in hand, though. And while I understand that they gave Clarke, Bellamy, Jasper, and Octavia that, um, medicine to knock them out so that they couldn’t see where they were going, at first I thought it was all a bit much.

Until we got to the end of “Join or Die” only to find out that Luna is [apparently] living on an oil rig. I guess a trip that far over water would be a bit difficult to disguise…but now I’m left wondering how in the world Luna and her people survive on that thing. Or is it just a meeting place? So many questions!

As for Luna herself, I’m reserving judgment. At least we know that she’s hiding away because she doesn’t want to kill, but that – and her refusal to take the chip – certainly throws a wrench in Clarke’s plans. 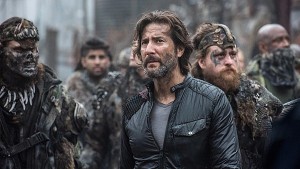 And yet, for all of my frustration over Bellamy’s constant puppy dog eyes, all of that was better than the plot in Polis. I feel like I was supposed to enjoy how shocking and awful all of it was, but I just couldn’t. I was so excited about Kane and Abby finally kissing, but then when they finally saw each other again in “Join or Die” I had to watch a chipped Abby try to coerce Kane into tell them where Clarke was. Sure, he figured it out and pushed her away (gosh, he really does get more and more awesome every time he’s on screen), but in the end it didn’t do him any good. I had to turn my head away while he was essentially crucified, but that wasn’t even the worst of it. Instead of watching him die in a horrible but righteous way, Jaha threatened Abby’s life in order to get Kane to take the chip. Let’s just say that I am *not* looking forward to what happens next…unless it involves Kane somehow being able to fight the chip the way Raven did.

Other than that, Murphy was Murphy, acting like the Grounders in the cell (along with himself and now Pike) have some sort of chance to [successfully?] rebel against Jaha and his army of chipped Grounders. But as these scenes were the only Polis ones that I actually liked, this is more observation than outright negative opinion.

In conclusion, I must say that although I’m not a huge fan of the song “Radioactive” by Imagine Dragons, the cover they used toward the end of “Join or Die”, performed by Koda, was absolute perfection. (I actually looked up Koda’s SoundCloud channel and have been listening to it for hours.)

While I didn’t care for the episode as a whole, it did have its moments (like that song), and I’m hoping that now that Clarke has at least found Luna, things will move forward. (Preferably faster than they have been for most of this season so far.)

What did you think about “Join or Die”? Did you like the Polis story line(s)? How do you feel about the scenes between Bellamy and Clarke? Let us know in the comments!

Previous:I’ve Had the Time of My Life at Ice and Fire Con 2016
Next: DC Universe Online has been Released for Xbox One