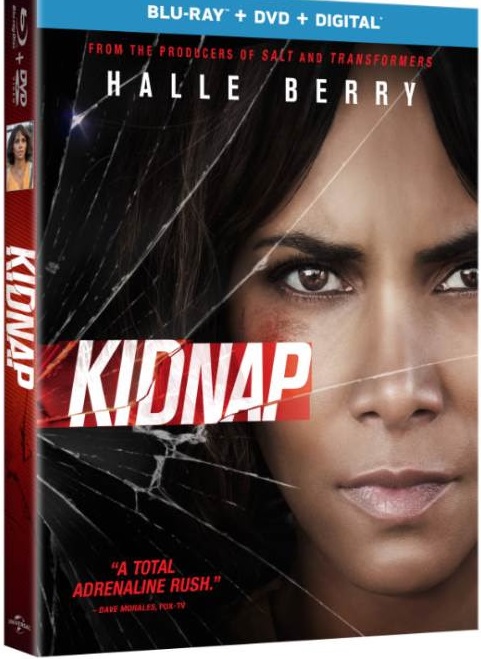 Halle Berry starrer Kidnap will be getting its home and Digital releases this October. You can own the Kidnap Blu-ray and DVD on October 31, 2017. It’ll be available on Digital on October 17, 2017.

Kidnap was released on August 4, 2017, after facing a lot of drama related to its distribution. Now, fans can join Halle again as she tries to rescue her kidnapped son by getting the Kidnap Blu-ray or DVD next month from Universal Pictures Home Entertainment. The thriller will also be available On Demand on October 31, 2017. The Digital release date is October 17, 2017.

A typical afternoon in the park turns into a nightmare for single mom Karla Dyson (Academy Award® winner Halle Berry) when her son suddenly disappears. Without a cell phone and knowing she has no time to wait for police help, Karla jumps in her own car and sets off in pursuit of the kidnappers. A relentless, edge-of-your seat chase ensues, where Karla must risk everything to not lose sight of her own son. In this tense, action-fueled thriller, from the producers of Salt and Transformers, one mother’s heroic attempt to take back her son leads her to ask herself how far she will go to save her child.

The bonus feature for the Kidnap Blu-ray, DVD, and Digital include

I was hoping to get some deleted scenes in the home release, especially after what actress Chris McGinn had to say during my interview with her. Chris McGinn plays the villainous Margo in Kidnap and she’s amazing at it.

Kidnap, produced on a reported budget of $21 million, has been able to make $29.95 million domestically as of September 6, 2017, and $2.4 million at the foreign box office. Halle also produced the film under her 606 Films banner.

Released by Aviron Pictures, who purchased the rights for $3 million, Kidnap is a fun film if you allow it to take you on a ride.

Halle’s upcoming films include Kingsman: The Golden Circle, which has a September 22, 2017, US release, and Kings, which is set to premiere at the Toronto Film Festival on September 13, 2017.

Have you watched Halle Berry’s Kidnap yet? Are you excited for the Kidnap Blu-ray and DVD released? Let us know.