“The Legend of Zelda: Breath of the Wild”: Familiarity in the Unknown 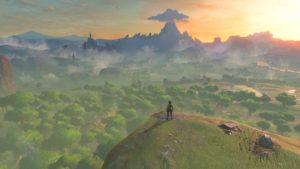 Nintendo kept their promise with their minimalistic approach to E3 this year. Rather than bringing many new games to be introduced, The Legend of Zelda: Breath of the Wild (yes, it has a name now!) took center stage and was one of the only titles discussed at E3. Since its initial introduction, Nintendo has said that this Zelda game would be a brand new imagining of the franchise. The stunning trailer and gameplay footage that was shown at E3 seems to confirm that idea, however, there are many aspects that are oddly familiar. While you can’t expect Nintendo to completely strip away everything that makes a Zelda game a Zelda game, it seemed like it would be worthwhile to take a closer look at what makes Breath of the Wild similar to its predecessors.

Several or All Zeldas:

The Legend of Zelda (for NES):

A Link to the Past/A Link Between Worlds:

There are likely many more subtle similarities that were overlooked or that will be seen later, but this list provides a pretty comprehensive look at what we know so far about Breath of the Wild just from E3. Breath of the Wild is clearly unique in its own right, but it is still a game in the Zelda franchise, even though it may not seem like it at first glance.

The Legend of Zelda: Breath of the Wild is set for release next year on both the Wii U and Nintendo NX systems. What are your thoughts on this new Zelda title?