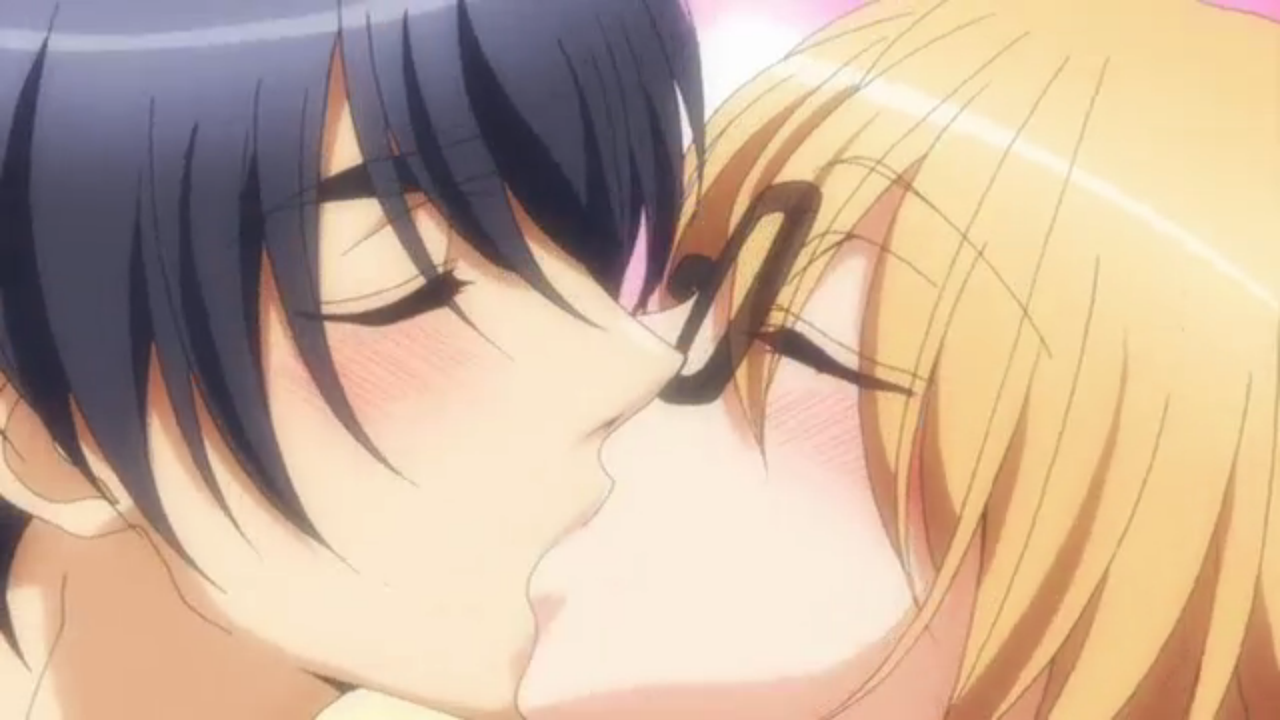 Love Stage!! is one of the fluffiest BL series I’ve ever enjoyed.  The first OVA, which was released with the fifth Love Stage!! Tankoban, lives up to my fun, fluffy, joyful expectations.  The first season of the show focused on two idiots falling in love, and the first OVA tackles their first major difficulty as a couple after they both managed to get on the same page about their feelings towards each other.  Of course, even this “difficulty” is pretty light hearted and humorous.  The best part is that this story also included Shougo and Rei (my favorite pairing of the series) and all of the wonderful traits that come with them.  It was an absolutely perfect follow up to the first season of the show. 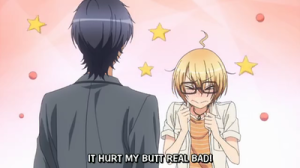 WARNING: This review contains spoilers for the OVA and vague discussion of sex acts.

Izumi and Ryouma are both very young and very inexperienced in the bedroom, which means poor Izumi didn’t exactly have a wonderful ‘first time.’  As unfortunate as this speed bump in their relationship may be, it did lead to my favorite line from the entire series to date: “IT HURT MY BUTT REAL BAD!”  This series has never shied away from being self aware that it’s a BL story, often having references to the genre rather directly in the text, but I’m always impressed when it manages to go against the genre in these small ways.  Most stories, whether they are BL or not, tend to depict a couple’s first time as something magical and wonderful, but that’s not really the reality of the situation.  Izumi and Ryouma are young adults.  Inexperienced, eager, idiotic young adults in love.  If it’d been a magical first time it’d have been nice, but not remotely realistic.

Izumi doesn’t quite know how to break the news to poor Ryouma, so he does the next best thing he can think of.  He assures their date isn’t a solo endeavor by having Rei inform Shougo that Ryouma and Izumi are going out.  As Shougo is the quintessential Protective Older Brother, he accompanies them to the theme park and rather blatantly ruins poor Ryouma’s plans.  The first season already established that if you’re going to date Izumi, Shougo and Rei sort of come as part of the package, but this seems extreme even with that in mind.  When Ryouma gets clever and ditches Shougo and Rei, poor Izumi is forced to confess that having them come along was part of his plan to avoid being alone with Ryouma.  This is where the previously mentioned “IT HURT MY BUTT REAL BAD” line comes in, which doesn’t go over well with Ryouma.  The poor kid takes a mighty blow to his ego.

This is where things go from hilarious and awkward to incredibly sweet and fluffy.  Ryouma, being the determined perfectionist that he is, actually studies homosexual sex.  Can we just take a moment to “aww” over this?  Because aww.  This is also the point where the OVA differs slightly from what the first season established in regards to censorship.  For some reason, whenever things would get hot and heavy in the first season, they would simply turn one or both characters transparent against a brightly colored cloudy backdrop.  Here there isn’t any such censorship, but their second go at it is still pretty tame.  If you are looking for graphic yaoi, this is not the show for you.  If you are looking for cute, cavity inducing sweetness with shirtless boys making out and then waking up in bed together the next morning, congratulations, you’ve found your show.

The OVA was perfect.  It kept up the fun and fluffy atmosphere the first season established while also pushing just a little farther on the sexual side of things.  It also came at a time where a lot of fans have been dying for new material.  The anime has been over for many weeks and the manga is having a cute, but somewhat unrelated, side story.  While we do have the Backstage!! manga starting up, I’ve been having some serious Love Stage!! withdrawals ever since the finale of the anime aired.  This satisfied that craving for now.  I don’t know how long I’ll remain satisfied, but at least I got something!

Previous:Constantine 1×05 Review: Danse Vaudou
Next: Agents Of S.H.I.E.L.D. 2×8 Review: The Things We Bury