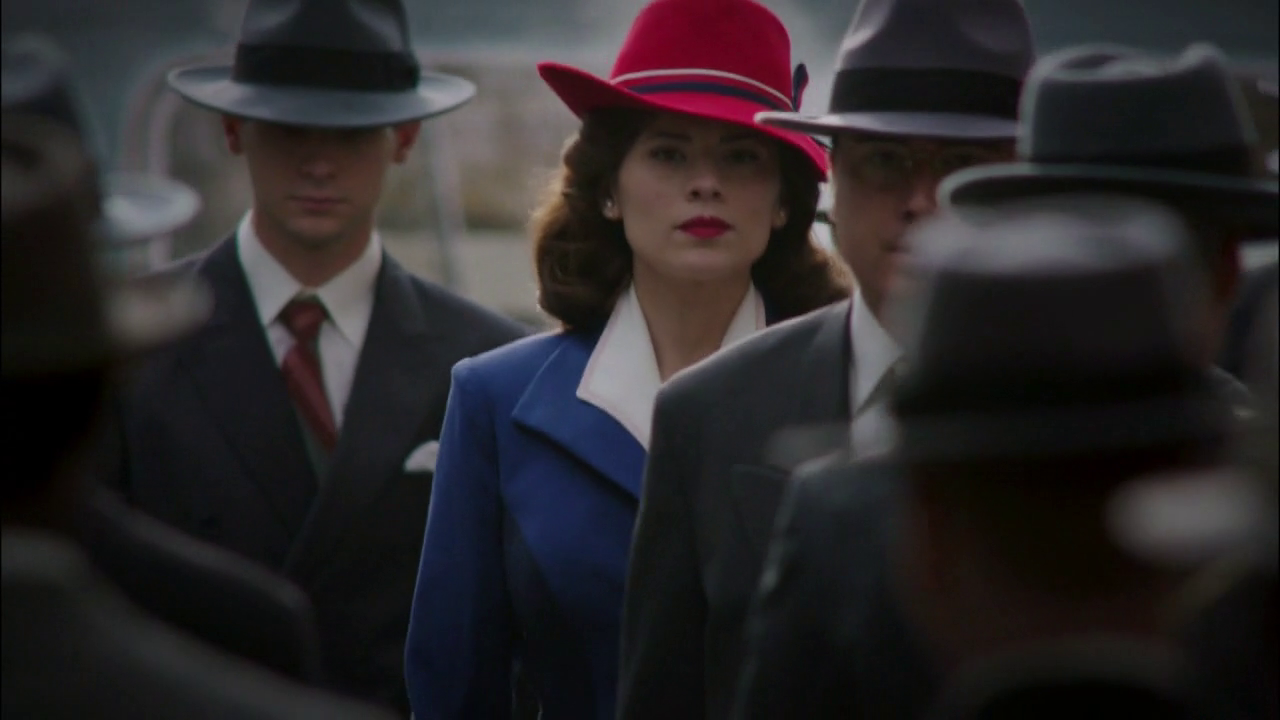 Let us all just take a moment to bask in the beauty that is Marvel’s Agent Carter because I know I’m not the only one that was worried they would muck it up – especially considering there is so much riding on its success. The future of female-driven comic adaptations is in Peggy Carter’s hands. But we can all breath a sigh of relief because the first two episodes of Marvel’s Agent Carter were fabulous fun with an unashamedly feminine flair.

It’s 1946, the war is over and while Peggy Carter is still working for the SSR (Strategic Scientific Reserve), things just aren’t like they use to be. As the GI’s get discharged, the girls get kicked out of the workforce. Although Peggy Carter has managed to hold onto her job, she’s treated more like a secretary than an actual Agent. When Howard Stark is accused of selling dangerous weapons to the nation’s enemies he calls on Agent Carter to clear his name. With the help of Howard’s butler Edwin Jarvis, Peggy sets out to find out who is framing Stark. 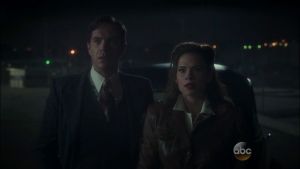 There are so many things about Marvel’s Agent Carter that work. The period setting gives audiences a perspective on the Marvel Cinematic Universe that is unlike anything found in its other offerings. Hayley Atwell could charm the pants off a Vorgon, the dynamic between Peggy and Edwin Jarvis is super enjoyable and the whole pulp-spy-thriller thing makes for great fun. I found the flashbacks a little heavy-handed in episode one but I guess they’re necessary for people that don’t rewatch the entire Marvel Cinematic Universe every six months. Let’s face it though, the true triumph of Marvel’s Agent Carter is that it is brazenly feminine.

This show is geared towards women and I know everyone will be quick to say that anyone can enjoy Marvel’s Agent Carter and that’s true but that doesn’t change the fact that Peggy Carter is a woman’s woman. This show doesn’t just depict sexism – it points a giant neon light at it and forces the audience to directly confront it. Sure Peggy is so much better than her male co-workers but that’s the genre. She’s James Bond or Indiana Jones except she wears heals and lipstick. Peggy’s skill isn’t what makes this show a triumph of femininity, it’s how she uses those skills.

From it’s opening sequence, Marvel’s Agent Carter sets out to show the changing role of women in post-WWII America. The montage mash-up of Peggy’s morning routine cut together with footage of her action packed past is enough for the audience to grasp that it’s vastly different world to the one we saw in Captain America: The First Avenger. To bring the point home, Peggy is joined by her roommate Colleen who’s lament the loss of 10 female colleagues to make way for returning soldiers. This theme is continued at Peggy Carter’s place of work; the outer room is a switchboard filled with women but once she enters the SSR she is surrounded by men. 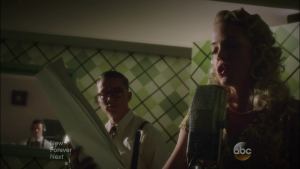 While it’s always fantastic fun to watch Peggy Carter school her misogynist workmates with her witty retort, it’s the overwhelming saturation of sexism that is truly powerful. The second episode ,“Bride and Tunnel” is footnoted by a radio program about Captain America’s wartime adventures, which depicts a Peggy-like character as your classic damsel in distress. The juxtaposition reaches its heights when Peggy is beating up one of the men responsible for selling Stark’s glowly bombs. In this scene, Peggy Carter associated not with the damsel but with Captain America himself and that is pretty amazing.

Because of the time period, and its determination to depict the misogyny that Peggy Carter must battle against, Marvel’s Agent Carter doesn’t get many chances – outside of the Indiana Jones-esque action sequences – to be subversive. Peggy’s too busy dealing with the overt sexism most of the time. But it does manage a certain amount of subversion in the relationship between Peggy and Jarvis. Edwin Jarvis is basically Agent Carter’s girl Friday. She bothers him while he’s baking, she’s constantly telling him to wait in the car and he acts as her moral/social compass (heroes always have trouble getting in touch with their emotions). 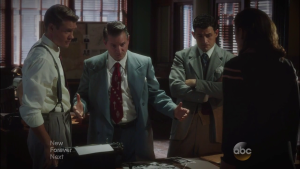 The rest of the supporting cast were overshadowed by Peggy Carter (and on occasion Edwin Jarvis). That’s not to say that they were bad because they were a bunch of really interesting characters packed into a very short amount of time. It’s always a pleasure to see Dominic Cooper’s Howard Stark, although I have to say I am pleased they are using him sparingly – he could get old very quickly. Daniel Sousa (Enver Gjokaj) and Jack Thompson (Chad Michael Murray) work well as Peggy’s SRR counterparts – a friend and a foe respectively but both men have obviously been irreparably altered by the war.  Shea Whigham is unmemorable but adequate as Agent Carter’s chauvinistic boss and although we don’t know much about Angie Martinelli, Lyndsy Fonseca and Hayley Atwell have such great chemistry that I can’t wait to see where it goes.

As I said above there is a LOT to love about Marvel’s Agent Carter but without a doubt the standout thing about this show is that Peggy Carter is a woman’s woman. This show is full of white men because that’s who Peggy is forced to interact with in order to do what she wants to do. When Peggy Carter gets to chose who she hangs out with, she chooses girls. Peggy admits that Colleen was basically her only friend and when Jarvis convinces her to open herself up to others she does so by reaching out to Angie Martinelli and moving into a women’s boarding house.

What did you think? Would you listen to that Captain America radio play? Did you enjoy it when Peggy stapled that one guys face? Do you fix your lady problems by going shopping? Let us know in the comments.