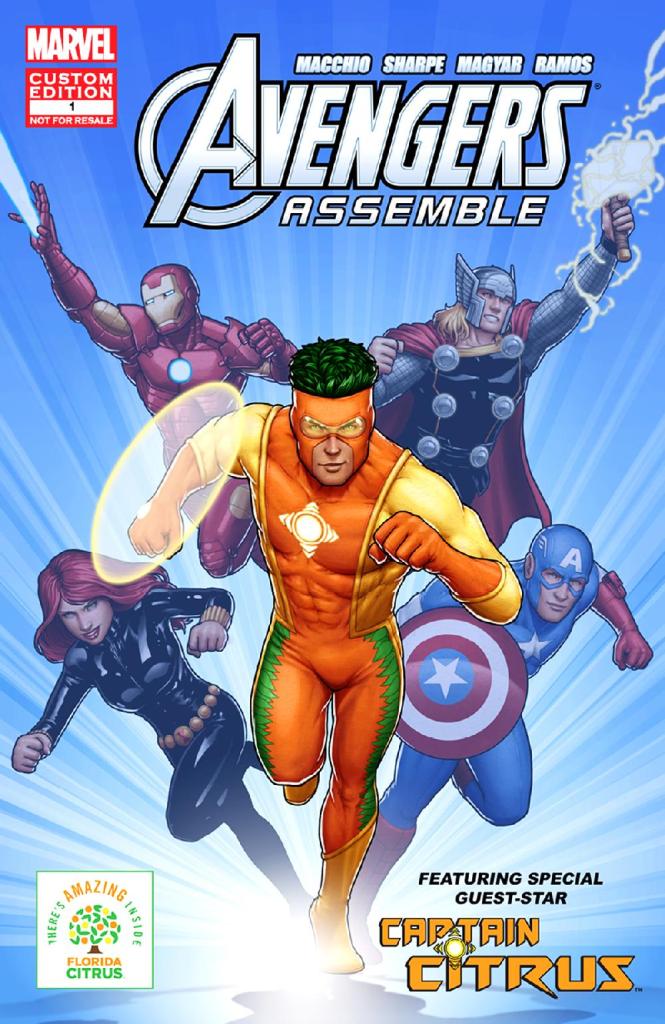 Marvel has added another superhero to its vast roster.  His name is Captain Citrus, and he comes with all the goodness of orange juice! He also stresses the importance of orange juice in one’s diet.

According to ABC News, the Florida Department of Citrus has paid a million dollars to Marvel to bring their mascot to kids and help the dwindling sales of orange juice. Captain Citrus is all about fighting villains and promoting orange juice as a wholesome and healthy drink.

Marvel really did their job with the character, giving him a backstory and an actual arc. His real name is John Polk, and he’s the son of citrus growers. His power set includes solar pods that are present at the back of his hands. These pods are powered by solar energy and he can use them to construct various weapons or shields. I personally like his green hair that looks like leaves growing out of his head.

Captain Citrus isn’t any ordinary hero.  He teams up with the Avengers to take down the bad guy known as the Leader. I don’t know if he’s an official Avenger, but he’s off to a good start with the team. Poor Kamala Khan hasn’t even met the Avengers yet!

One another note, how far do you think Marvel will go in selling its iconic characters to companies that are willing to pay millions to promote their brands?

Am I the only one who’s hoping for Victoria’s Secret to suffer a loss in sales so they can use Marvel’s female superheroes to attract interest?

You can learn more about Captain Citrus here.

What do you think of Captain Citrus and Marvel’s move to help a company by creating an original character that exists only for promotional purposes? Let us know!