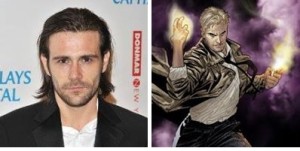 It seems every network is trying to get a piece of superhero success. No one can deny the success of Arrow (CW), and Fox’s Gotham is already garnering a lot of interest. Now, it’s NBC’s turn to bring a superhero to our TV screen as Constantine has found a male lead.

Deadline has reported that actor Matt Ryan will be playing the famous comic book superhero, John Constantine. The last time I saw the character it was in the feature film Constantine back in 2005 where he was played by Keanu Reeves. The character is indeed intriguing and I know fans are excited at the possibility of seeing him on a weekly basis if the pilot gets picked. If you aren’t familiar with the comics, you can think of the show has something similar to Supernatural. There are going to be a lot of demons and magic in this one. John himself is a shady character and his skill set includes being an expert con artist with in-depth knowledge of the arcane arts.

David S. Goyer is involved in the series, while Neil Marshall (GoT, Black Sails) will be directing the pilot. I have faith in Goyer and I think he will be able to bring the much needed dark element to the series. He has experience writing for DC properties before and has co-penned films like The Dark Knight trilogy, Man of Steel as well as Batman vs. Superman. Now, that’s an impressive resume.

I am happy to see more comic book characters coming to TV because making a movie about every character and doing justice to them just isn’t possible. The question that arises is whether or not this series will go towards the controversial side of the character. In his Hellblazer comic series (1988-2013), writer Brian Azzarello portrayed Constantine as bisexual. The story “Ashes & Dust in the City of Angels” came out in 2002 and it challenged what many fans thought of the character.

TV still needs work when it comes to LBGTA portrayal. I’m not saying they should immediately show John kissing another man. I just don’t want the writers to straight wash an iconic character. However, debating about this is too early as the pilot still needs to be picked up (which does seem likely because of the people behind it). The good thing is that we have another superhero show to look out for and it will have a canon bisexual male character in it. Fingers crossed they don’t mess this up.

What are your thoughts about the show? Are you excited to see John Constantine? Share below!

Previous:Solo Black Widow Film, Not Quite Confirmed, But Close
Next: Jeffrey Dean Morgan to appear in “Shameless” finale