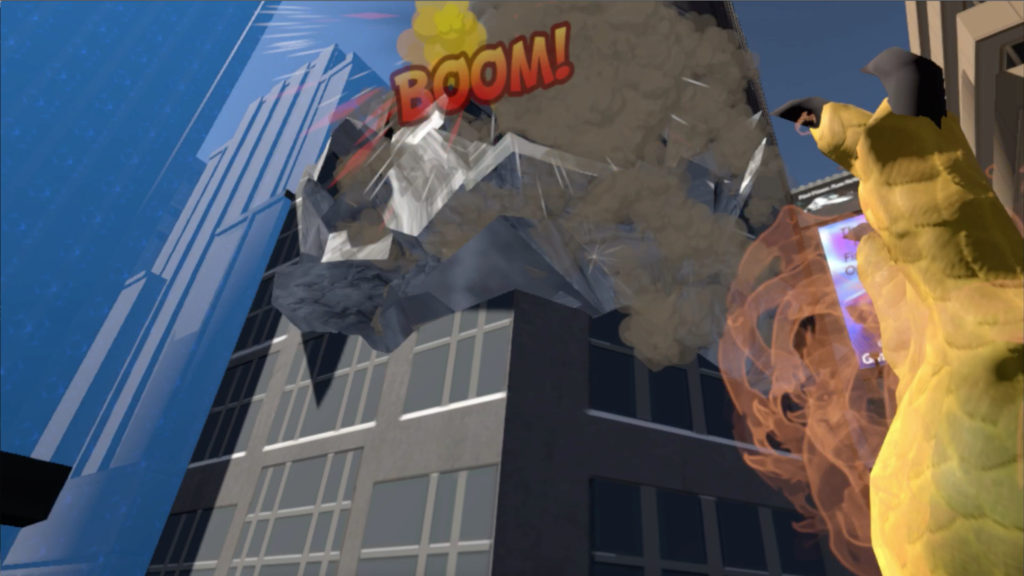 Rank17’s Mighty Monster Mayhem will allow players to live out their kaiju-inspired fantasies in a virtual world. It’ll be released on Steam VR/HTC Vive on 20 April 2017.

The teaser trailer for Mighty Monster Mayhem does look exciting. Wrecking skyscrapers as a giant monster sounds like a lot of fun!

Renowned for your research in cryptozoology and mutations, you were ridiculed and outcast from the scientific community while trying to prove the existence of monsters. After recombining cryptid DNA, you found a way to bolster the human immune system and increase strength. However, your research has been deemed fraudulent – and the local Cryptozoological Research and Progenation chapter has cut your funding. In a last-ditch effort to validate your work, you’ve decided to give the scientific community a live demonstration by drinking one of your molecular mutation liquids and transforming into a legendary monster …

Choose to blend your DNA with one of five different creatures including Cthulhu Carl, Ronald the Rock, Ian Insectoid, Toni the Oni, or Gorzilla (a.k.a., “Todd” – who doesn’t like labels) and start wreaking havoc across town. Use the HTC Vive’s motion controllers to tear down skyscrapers, munch on unsuspecting pedestrians, and monster-punch everything you see. Need to reach a new vantage point or hit a target that’s just out of reach? No problem: Use the motion controllers to climb the tallest buildings and throw objects like the good monster you are.

Play through the single-player campaign and make 9 cities crumble at your feet. Rampaging alone is fun – but reducing everything to rubble with friends is even better. Unleash your fury online as you battle with (or against) your friends – and lay waste to the human world!

The key features of Might Monster Mayhem include:
*   Tearing down entire cities building by building and stomping your way around town.
*   Challenging or joining your friends in multiplayer destruction.
*   Obliterating cities in single-player mode.
*   Choosing your monster: Cthulhu Carl, Ronald the Rock, Ian Insectoid, Toni the Oni or Gorzilla (a.k.a. “Todd”).
*   Climbing buildings, throwing objects, and monster-punching things!
*   Wrecking everything in sight, earning a high score, and climbing tall buildings (along with the leaderboards).

What’re your opinions about Mighty Monster Mayhem? Will you be playing it? Let us know.

Previous:“Rise of the Chosen” Turns the Zombie Trope Inside Out
Next: Star Wars Rebels Panel & Press Conference Highlights