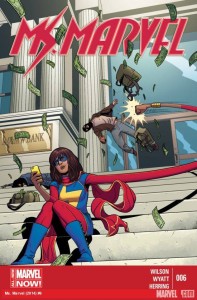 It seems that the new Ms. Marvel series just can’t do anything wrong. Every month I’m amazed at how enjoyable the story keeps getting. This month’s issue showed Kamala trying to make sense of The Inventor and teaming-up with Wolverine!

The first thing I noticed was the art. The current issue has been worked on by Jake Wyatt, and he has a very different style than Adrian Alphona, who worked on the previous five issues. Jake’s Kamala looked adorable during the many comedic scenes in the story. He’s going to stick around until issue 7, and I’m looking forward to seeing the cuteness while it lasts.

G. Willow Wilson is doing an amazing job when it comes to portraying Islam in the story. She’s trying to educate readers on what is really meant by Islam, and not portraying it as a backwards religion that most media outlets tend to do. I liked the growing relationship between Sheikh Abdullah and Kamala. At first she was hesitant to talk to him. He understood, however, what she was going through and even gave her advice about what to do next.

The main plot features The Inventor going after Kamala, and I found it weird that she actually went out at night to destroy his little tracking machines. But I think the scene demonstrated that she isn’t going to hide away from danger. The issue also gave The Inventor some backstory, and I was surprised to find out that he was a clone of Thomas Edison, who had his DNA contaminated by a bird. So, is Thomas Edison’s clone evil? I’m not so sure yet. I think the story will tell a bit more about his motives as it progresses. Currently, being a scientist, his interest in Kamala feels similar as one might have for a test-subject. I think he will keep putting Kamala through tests until he gets bored with her.

The highlight of the issue was Kamala’s surprise meeting with Wolverine, and her ‘fan-girl’ coming out. She even went on to mention the fan-fiction she wrote about the X-Men. The dynamics between the two were awesome and I hope to see more of that. Wolverine has experience with kids because of training young mutants, but I’ve never seen him take a liking to a youngster as quickly as he liked Kamala. I don’t blame him. Kamala is a very likeable character. 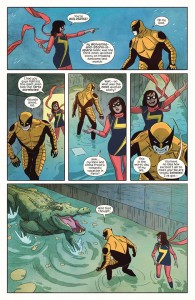 At first I thought Wolverine was going to save Kamala, but by the end of the issue, she had to stand up and make sure the two heroes survived The Inventor’s test. Without his healing powers, Wolverine couldn’t heal from his injury, and I’m looking forward to the next issue and how Kamala will save Wolverine and herself from a giant mutant alligator. Even though she hasn’t had much experience, she still has brains and is quick on her feet. So, I know the two will make it work in their favor.

Did you read this month’s Ms. Marvel? What are your thoughts about the story? Feel free to share in the comments section below.