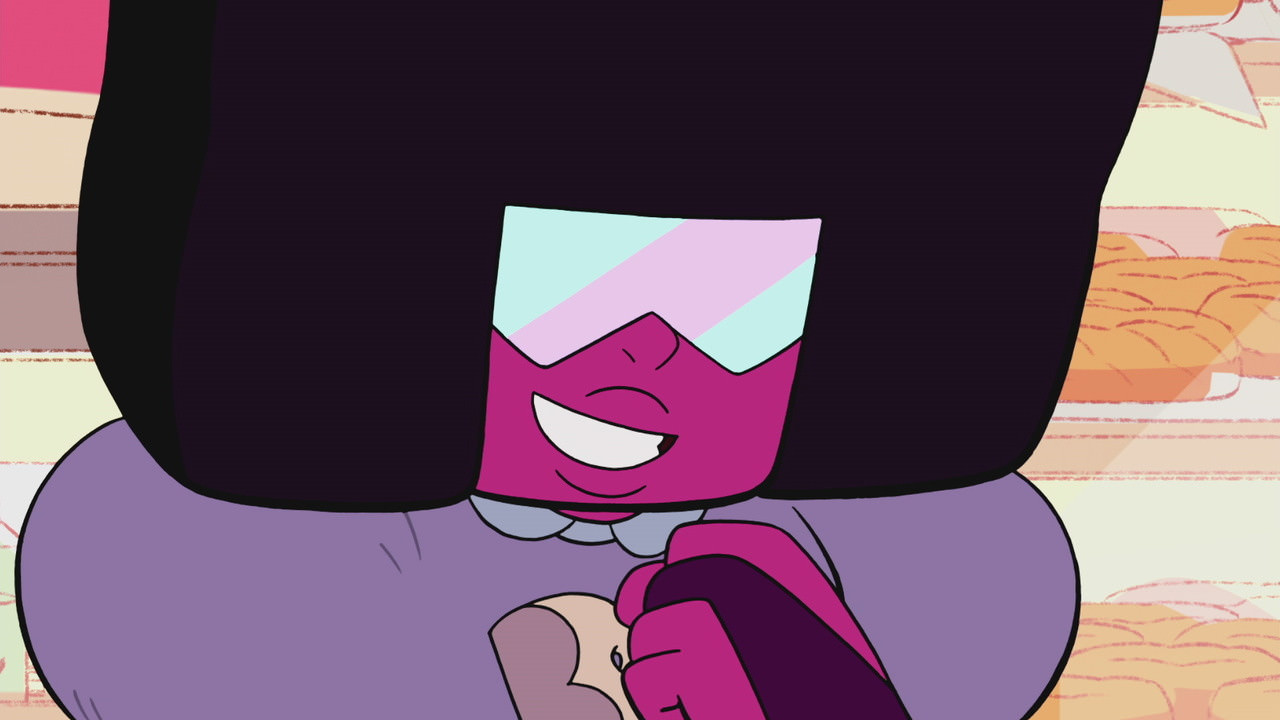 Garnet’s future vision is on the fritz, so she and Steven go “Pool Hopping” around Beach City in an attempt to arrive at improbable futures.

Steven is safely back from his Homeworld adventures and he and Connie have made up after their ensuing fight, but things have still changed around town. Newly-minted Mayor Nanefua is coaching citizens on evacuation plans in case of (another) Gem attack, and since Sadie is busy with her band, Steven’s beloved Big Donut is closed. Or, it was, until he notices an unlikely employee behind the register: Garnet! Looking outrageously adorable in a t-shirt and khakis, Garnet serves up donuts with gusto. When Steven asks “have we fallen on hard times?” Garnet says she’s not doing it to make ends meet, “it’s about being random.”

Using a spilled cup of coffee, Garnet multi-syllabically explains that she’s exploring “extremely unlikely realities.” Steven listens patiently, and then summarizes in much plainer speak: “Oh so, you wanna do stuff you usually don’t just to see what happens.” Garnet is pleased and surprised (which, for her, is a big deal) that Steven understands the concept so quickly. This exchange foreshadows the conclusion of “Pool Hopping,” and it’s folded in so naturally it takes a rewatch of the episode to fully appreciate. Five seasons in, and the writing on Steven Universe continues to amaze and astonish with its finesse. Plus, we get to see Garnet hulk out of her temporary human uniform with a singsong “I quiiit!” 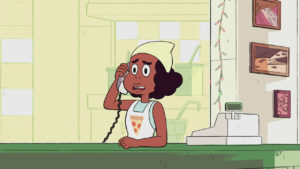 Naturally, Steven is super on board to help Garnet explore unlikely realities. The first thing they do is order pizza from Fish Stew Pizza, but they do that all the time, so they have to change it up. When Steven tries to get the twenty pizzas they order delivered to the moon, Garnet cautions him to remember they are looking for improbable realities, not impossible ones. Inspired, Steven tells Kiki he wants the pizzas delivered to none other than Fish Stew Pizza.

Instead of eating them like they’d normally do, Steven and Garnet deliver the pizzas to random passersby and wander to Vidalia’s house. Sidenote: I love that I can somewhat navigate Beach City after playing through Save the Light; it’s a real treat to recognize all the shops on the boardwalk and the neighborhood of the town. On the way to Chez Onion, Garnet comments that Vidalia is probably sad that her son is stuck up in space. Steven reminds her it’s Lars, not Onion, who’s currently stuck. Garnet says it must be a different reality that confused her. Setting aside the fact that “Onion of the Stars” is for sure a fanfic I’d like to get my eyeballs on, this moment is a clear indication that Garnet is motivated to explore these realities by something more serious than simple randomness.

“Pool Hopping” is in my opinion one of the funniest episodes of Steven Universe, and the climax of the Garnet-Steven hijinks is at Vidalia’s house. “Paint me like one of your Amethysts,” Garnet says, striking a pose. Vidalia readily agrees to paint her and Steven, and tells them to stay still so she can make sure to capture their “essence.” Steven spies a one blue-eyed kitten rummaging in a garbage can just outside of Vidalia’s garage. He asks Garnet how probable it is that they go after the kitten. “Don’t ask me, tell me!” Garnet says, her facade cracking again. Steven opts to follow the kitten, and he and Garnet go dashing out. 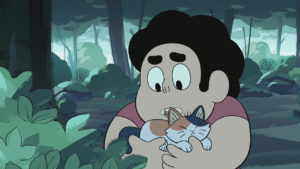 One-eyed kitten leads them to her siblings, starving in the woods. “Alright, I think we need to stop being random and figure out a way to help these kittens,” Steven says, handing them to Garnet. She freezes, overwhelmed with the all the futures these kitties could potentially live out. Steven helps her deal with what is essentially a future vision panic attack, asking her to focus on just the one-eyed kitten. “Steven, I’m so lost,” Garnet says. “Don’t worry, I know the way back to town,” Steven replies. Ah, Steven. So emotionally astute, so verbally literal.

Of course, Garnet is not physically lost. Lately she has been feeling helpless, not able to predict any of Steven’s recent big decisions (finding Blue Diamond in Korea, giving himself up to Aquamarine).

Everyone’s looking to me for answers; I can’t stand it! It’s so hard for me to just exist in the first place, Steven. I want to love being alive. I want to love that there are so many possibilities. But I’m the one with this ability so I’ve got to be our guide.

Steven listens to her outburst with love, and then does something that yet again, Garnet doesn’t predict. “[M]aybe instead of thinking of all the things that could happen, let’s just pick the thing we want to happen and do that.” Garnet says she wants to get the kittens out of the rain and Steven produces his shield to work as an umbrella. Garnet smiles.

At Vidalia’s once more, Steven successfully finds a vet to foster the kittens. Watching Steven speak to the baby cats, Garnet realizes what the source of her recent problems. She has been treating Steven like a child, expecting him to run from responsibility and turn to her for help. But Steven has grown so much since “Gem Glow.” “There’s nothing wrong with this timeline, or my future vision,” Garnet says. “I just need to factor in that you’ve grown up.”

“Pool Hopping” starts with Steven commenting on the changes his town has gone through recently. Just like Beach City, Steven can be who he always was– getting over excited about hijinks, palling around with Gems and humans alike, chasing kittens– but he can still grow and mature as he realizes more of the realities of the world and the situation he was born into as the son of Rose Quartz. Garnet has always believed in Steven, and now their relationship is even stronger.

Considering the promo we got from Cartoon Network leading up to these episodes… that strength will probably be needed, soon.

Fight for life on the planet Earth ✊🌎
Here’s a recap of everything you need to know before the NEW episodes on April 9! Watch them before ANYONE else on the CN app starting March 26. pic.twitter.com/LTT5fd2iAb

(Shout-out to Faded Blue, an awesome fanfiction where Steven is the son of Blue Diamond instead of Rose Quartz, for totally calling a “Steven finds a bunch of abandoned kittens” side plot!)